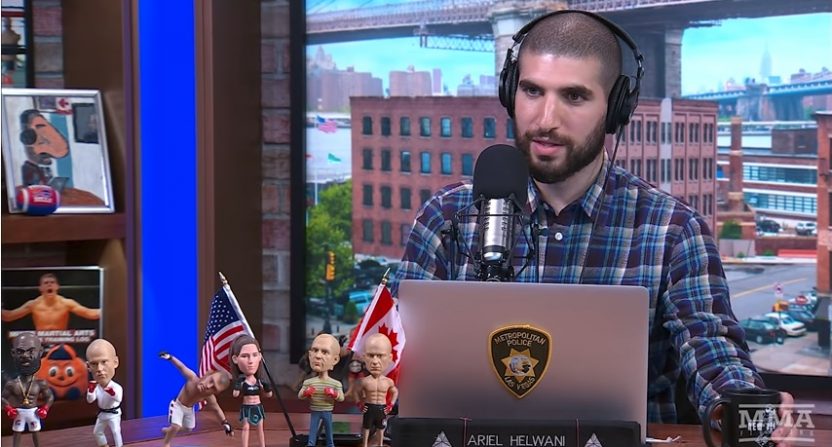 Helwani will host a new weekly ESPN+ MMA show with Chael Sonnen, entitled Ariel and The Bad Guy, while also reporting and hosting a podcast (Ariel Helwani’s MMA Show, which is likely going to be pretty similar to his ongoing The MMA Hour show that lasts far longer than one hour).

There has been no word on what will happen to The MMA Hour, The MMA Beat (another MMA Fighting show often featuring Helwani), or MMA Fighting as a whole, though Helwani did indicate in a series of tweets that the site would continue.

He’ll officially join ESPN in June, and the show with Sonnen will premiere on June 20th. Perhaps not coincidentally, Sonnen made an appearance on The MMA Hour this Monday.

“Ariel and The Bad Guy” will team Helwani with professional fighter and ESPN MMA analyst, Chael Sonnen, for a fast-paced 30-minute weekly breakdown of the top stories, developments and upcoming fights. New episodes will be available on ESPN+ each Wednesday, beginning June 20, and there will be special episodes before and after major mixed martial arts events.

After two-plus years working exclusively for SBNation through MMA Fighting, Helwani will once again be employed by a UFC rightsholder. He previously worked at Fox before leaving in March of 2016, leading to a “lifetime” ban by the UFC in June of that year that lasted for roughly 24 hours. UFC color commentator Joe Rogan proceeded to claim that Helwani’s reporting could “ruin people’s lives,” and UFC president Dana White proclaimed that he wasn’t a real journalist.

The feud between Helwani and the UFC eventually led to the UFC allegedly pressuring Showtime to remove him from the Floyd Mayweather-Conor McGregor press tour.

Now, Helwani will once again be covering the UFC for a network that airs the UFC. Given that ESPN just shelled out $150 million a year for the UFC’s digital rights, I wouldn’t expect them to sit idly by if White and/or other UFC personnel trashes Helwani publicly as has happened in the past.

Anyway, this is a strong hire for ESPN, and once again places an emphasis on digital content, just weeks after announcing the launch of several new digital shows. A bunch of other digital shows have launched on ESPN+ over the last month or so, including Kobe Bryant’s Detail, In the Crease featuring Linda Cohn and Barry Melrose among others, ESPNFC, Dan Rafael’s The Boxing Beat, and Taylor Twellman’s MLS Rewind.

Of course, none of these shows alone will drive subscribers to ESPN+, but