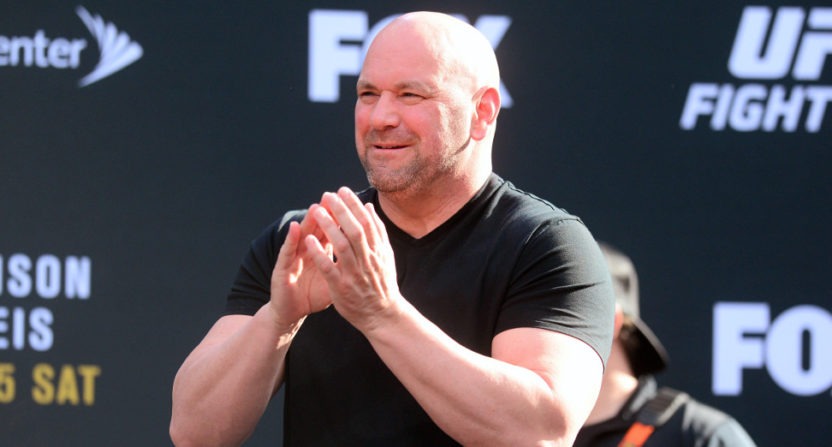 Back in November, we wrote about how the UFC wasn’t finding much luck in trying to land a much-bigger rights deal, and it appears that’s still the case.

The UFC’s internal projections ahead of the 2016 sale of the company to Endeavor estimated they could get up to $450 million a year from TV, almost four times the $120 million they make annually under their current deal with Fox, but no one appears to have offered them anything in that ballpark so far, or even anything near the reduced rate they’ve since been asking.

Bloomberg’s Lucas Shaw has more on the challenges the UFC is facing:

[Agent Ari] Emanuel’s Endeavor has spent months trying to sell TV rights to the Ultimate Fighting Championship, the mixed martial arts league his company bought for about $4 billion in 2016 with the private-equity firms Silver Lake Partners and KKR. The buyers gambled UFC could obtain a huge payday from TV networks hungry for more live sports.

But no buyer has stepped up to pay the $300 million to $400 million a year Endeavor wants, people close to the talks said. 21st Century Fox Inc., which has the contract now, has expressed its interested in keeping the sport, and Endeavor is waiting to see if the company will increase its estimated $200 million bid, said the people, who asked not to be identified discussing the negotiations.

What’s interesting with Fox is that they’ve been heavily linked to a bid for WWE rights, which expire in the fall of 2019. But some of those reports have suggested Fox wants one or the other between the WWE and the UFC, not necessarily both.

There might be more interest in WWE, thanks to its better ratings (which even tend to beat a lot of good NBA regular-season games) and the UFC’s declining TV ratings, but the UFC rights might be much cheaper to acquire and with less competition. CBS/Showtime don’t seem particularly interested, and neither do NBC/Comcast (although there could maybe be more interest there if they’re convinced they’ll lose the WWE rights).

As per ESPN, Shaw’s piece says “several people familiar with the company’s plans said it was bidding,” and there might be more appeal for them than normal thanks to the forthcoming launch of streaming service ESPN+ and the need to put content there, but the ESPN interest here doesn’t seem all that firm either, and it might be mostly about driving the price up for others.

The most notable wild card here may be Turner. Turner has shown a clear interest in grabbing sports programming, including stuff they haven’t historically had (like the UEFA Champions League), and they’ve previously partnered with IMG (which Endeavor owns) on ventures like ELEAGUE. But we noted back in November, uncertainty over the AT&T-Time Warner (the latter is Turner’s parent company) merger was likely holding up a Turner bid for long-term rights.

Shaw’s piece notes that as well, saying “Turner chiefs John Martin and David Levy have told several people they are interested in UFC, but their ability to bid is partly hampered by an ongoing government challenge to AT&T Inc.’s acquisition of their parent company Time Warner Inc.” Maybe Turner will put in a bid anyway, or maybe their merger situation will become more clear, but the uncertainty there has certainly come at an unfortunate time for the UFC.

None of this necessarily spells disaster for the UFC, of course. There’s still demand for their rights, as shown by Fox offering $200 million (which would be a 67 percent jump over the previous deal), and they could perhaps get even more if they’re willing to listen to more non-TV offers from the likes of Amazon (which has already bought non-exclusive rights to sell UFC PPVs), YouTube, Twitter, Facebook, or Verizon (parent of Yahoo/AOL media unit Oath), or if they’re willing to split their package between a TV suitor and a tech suitor.

The UFC could maybe juice the bidding for their TV package further by promising better fights there, although that could weaken their pay-per-view business. They also have strong international sales, so U.S. TV isn’t the be-all and end-all for it.

But most of the options here come with some tradeoffs, and it seems like the UFC will either have to be content making much less than they initially forecast, or will have to alter their TV business model to try and get more. And this is notable as perhaps a wider look into sports rights. Yes, the rights bubble has far from burst, and people are still willing to pay big for premium programming; consider the recent Fox and ESPN Big Ten deals, or Fox’s new Thursday Night Football deal. But not every sports league is just going to see its fees go through the roof, and leagues can’t always just name their price.

This new UFC deal is still going to be an increase over what the organization was making, but it seems unlikely it will be close to what they wanted.