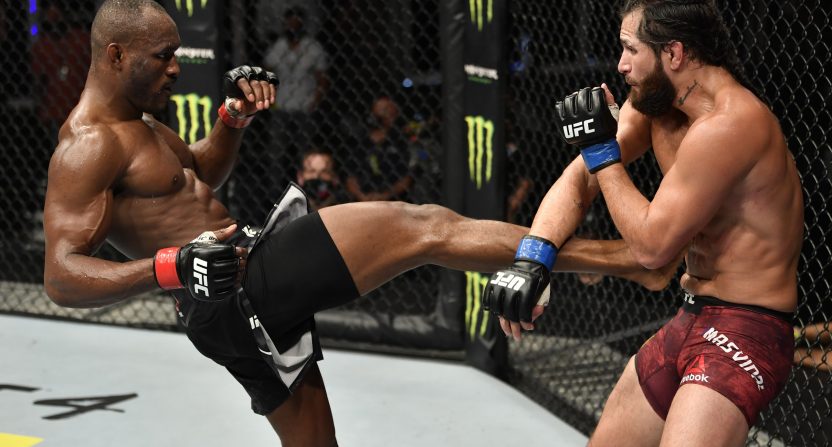 UFC 251 was headlined by a trio of title bouts, and though the main event between Kamaru Usman and Jorge Masvidal didn’t deliver in the excitement department (Usman won a dominant, fireworks-light unanimous five-round decision, dropping just one round in total across the three judges’ scorecards), the PPV was a massive hit for ESPN+.

According to The Athletic, UFC 251 totaled somewhere in the neighborhood of 1.3 million buys. That’s the highest number for a UFC PPV since UFC 229, headlined by Khabib Nurmogamedov’s dominant win over Conor McGregor, drew 2.4 million buys.

For some extra context via Tapology, there have been five other events that have drawn 1.3 million buys. Four of them have been main evented by McGregor (UFC 202 at 1.6 million, UFC 196 at 1.317 million, and UFC 205 at 1.3 million), and the only one that wasn’t came way back in 2009. Exactly 11 years before UFC 251, on July 11, 2009, UFC 100 drew a then-record 1.3 million buys for a card headlined by the Brock Lesnar-Frank Mir rematch, while the event also featured Georges St. Pierre defending his welterweight title against Thiago Alves and Dan Henderson knocking out Michael Bisping in one of the most vicious knockouts in UFC history.

(unrelated, but some guy named Jon Jones had his third UFC fight on the undercard of UFC 100. I wonder what ever happened to him).

This is great news for both the UFC and ESPN+. Back in May, UFC 249 drew a reported 700,000 buys on ESPN+, and January’s UFC 246 shined with a million buys. However, the buyrates for UFC 247 in February, UFC 248 in March, and UFC 250 in June were never publicly reported, which probably means they were nothing worth bragging about. But it’s encouraging for three of the company’s six major events of the year, including two in the midst of the pandemic stateside, to draw over 700,000 buys, especially since McGregor only was on one of those three cards.