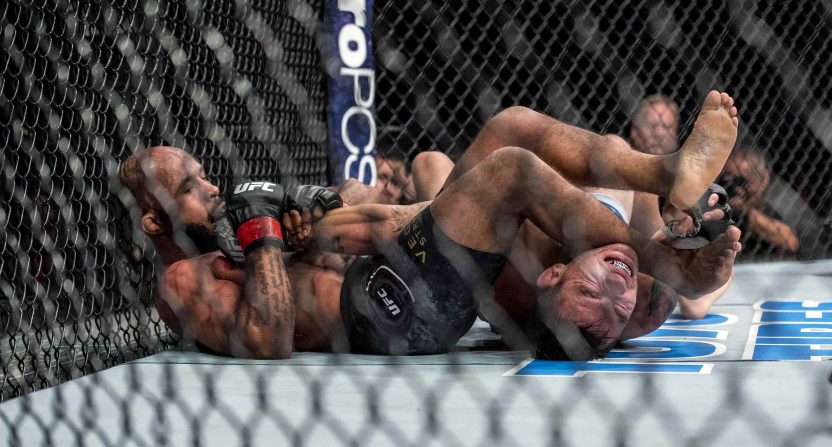 ONE Championship, the MMA promotion based in Singapore that employs former UFC champions Rich Franklin and Miesha Tate as vice presidents, has agreed to an American content deal with an unexpected partner. According to Ariel Helwani of ESPN, ONE has agreed to a three-year deal with Turner Sports, which begins in January.

Here’s more from Helwani on Turner’s entrance into the MMA atmosphere, which will include live fight cards on B/R Live and tape delayed events on TNT.

The deal, which goes into effect on Jan. 1, calls for 24 events to air live on B/R Live, Turner’s digital platform. The partnership is expected to be announced in the coming days.

In addition to the live events, Turner will air shoulder programming and taped events on TNT and there is also a reality show in the works, as well, according to sources.

Three cards are initially planned for the start of 2019, taking place on January 19th, February 22nd, and March 31st. Given that these events are all taking place in Asia (in Jakarta, Singapore, and Tokyo, respectively), they’re likely going to be taking place during the wee hours of the morning on the east coast (a nice throwback for those of us that used to watch promotions like PRIDE, DREAM, and K-1 back in the day).

We normally wouldn’t bat much of an eye towards ONE Championship, but a rush of recent signings by ONE from the UFC and Turner jumping into the MMA world have piqued our interest. In October, ONE signed former Bellator and UFC lightweight champion Eddie Alvarez. They followed that up by swapping Ben Askren for former UFC flyweight kingpin Demetrious Johnson, and two weeks ago, they outbid the UFC for the services of 22-year old Sage Northcutt, who went 6-2 with the promotion and left on a three fight win streak.

A national TV deal, especially one based on live content airing on a digital platform, in America doesn’t mean immediate success for ONE, however. Bellator’s been around for 11 years, airing on Fox Sports Net, MTV2, Spike, Paramount Network (the spiritual successor of Spike), and DAZN, and while it’s undoubtedly made strides and is the #2 MMA promotion in America, it’s still miles behind the UFC. EliteXC had cornerstone TV deals with CBS and Showtime, and folded (eventually being absorbed into Strikeforce) less than two years after the promotion’s first card. Strikeforce thrived on Showtime (and a couple of times, on CBS) following the end of EliteXC, but was eventually purchased and shut down by the UFC. The WEC served as a sister promotion to the UFC while airing on Versus for four years before being merged into the UFC. DREAM and Sengoku/World Victory Road both aired on HDNet in America and folded.

However, some promotions have planted their flags on American TV and have survived in recent years. The Pro Fight League (which was previously known as the World Series of Fighting) aired fight cards on NBCSN and Facebook this year. Combate Americas is doing decently enough on Univision. Golden Boy put on a damn pay-per-view in the last month, and (for better or worse) promoter Oscar de la Hoya wants to continue running shows in 2019.

Going back to ONE, they’ll be providing live content for Turner, likely at an hour where there isn’t much in the way of live, original content on the air. But for MMA fans, this will mark the third streaming service they need to sign up for if they want to watch all of the top promotions, along with ESPN+ (UFC) and DAZN (Bellator). That could make this a bit more of a difficult sell for fans, especially if they’re not fans of international soccer (B/R Live’s primary offering).