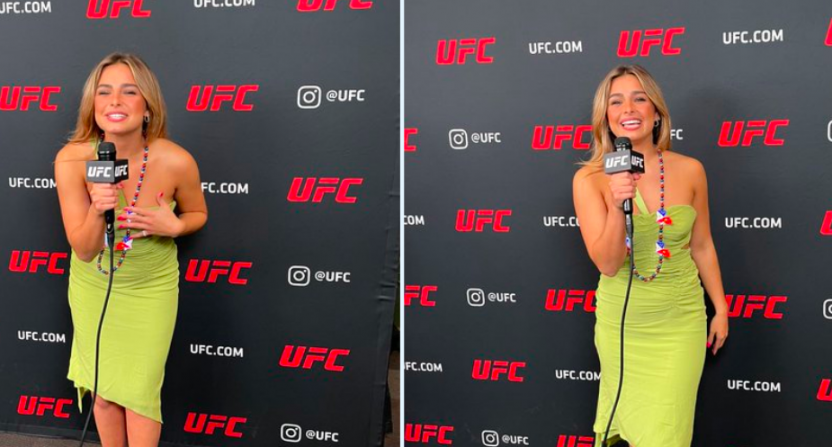 Social media influencer Addison Rae has seen her star rise ever since she showed up on TikTok, becoming one of the app’s breakout stars thanks to her dance videos and other appearances. She currently has over 81 million followers on the app and was named by Forbes as the highest-earning personality on TikTok in 2020.

Along with money, Rae has obviously been looking for ways to leverage the brightly burning fame that comes with social media before it fades. On Twitter, she made it look like one of those ways was working as a live reporter for Saturday’s UFC 264. While no official announcement was made, Rae shared photos of herself on the red carpet while holding a UFC-branded microphone, with the message “I studied broadcast journalism in college for 3 whole months to prepare for this moment” (Rae reportedly did attend LSU for a few months).

I studied broadcast journalism in college for 3 whole months to prepare for this moment pic.twitter.com/5Z95OTSVTA

The 20-year-old also shared photos and videos of herself in official UFC gear on Instagram. However, as per A.J. Perez of Front Office Sports, this was a stunt:

This was all a stunt, a source with knowledge of the situation tells @FOS. @whoisaddison was never employed by UFC, either in a full-time capacity or as a one-off for #UFC264. pic.twitter.com/sq4rL8pNs1

It’s still notable the reaction this got.  While if this had been true, it might feel like a real success story for Rae, but the flippant announcement seems to have  hit a raw nerve with many, especially journalism students and working journalists. Many of those who tweeted about it were frustrated with seeing another broadcasting gig taken by someone who might not have the education, experience, or ambition that they have, especially in a marketplace where journalism and broadcasting opportunities already seem scarce.

just imagining everyone who went to school for this and applied getting the call that addison rae got the job that’s so sickening https://t.co/UZjRGifyjV

I’ll be vulnerable here. A punch to the gut thinking about the $19,000 salary I accepted in 2019 to get my on-air start in a backwards newsroom and to put my degree to use. It’s not about her new job title (for me at least), it’s about that caption… #NOTalook https://t.co/w0xk1KpFtb

…and all it takes for Addison Rae is TikTok and three months of college to be ahead of you. https://t.co/U01hx6tgGT

To aspiring journalists devastated/frustrated over this … you will see many who land a “sweet gig” for various reasons – not always deserved. Look away & keep focused on what YOU’RE building – a career. What’s easy won’t last – and what lasts isn’t easy. Keep growing…keep going https://t.co/e1baSgxvmg

Career advice for those considering getting a full-time journalism degree: A LOT of jobs in the industry are now being taken over by influencers/celebrities/YouTubers.

It's a reality you need to deal with. https://t.co/Gtl32sQPaY

Addison Rae potentially taking a broadcasting spot from a young kid who worked her entire life for that spot bc she woke up and decided to just be there is my problem here. https://t.co/CAYhB5EzrU

While many might have assumed that UFC loved the attention that Rae brought with her, good or bad, that was apparently not the case. After the social media backlash, Rae tweeted that she was “fired.”

nvm y’all got me fired https://t.co/kHFFvHuSaM

There’s probably a discussion to be had here about whether or not Rae got especially dumped on here because she’s a young female influencer while plenty of male athletes transition over to broadcasting roles without receiving similar backlash. But that’s the kind of nuanced conversation that’s best saved for another day. At any rate, this certainly got everyone talking.