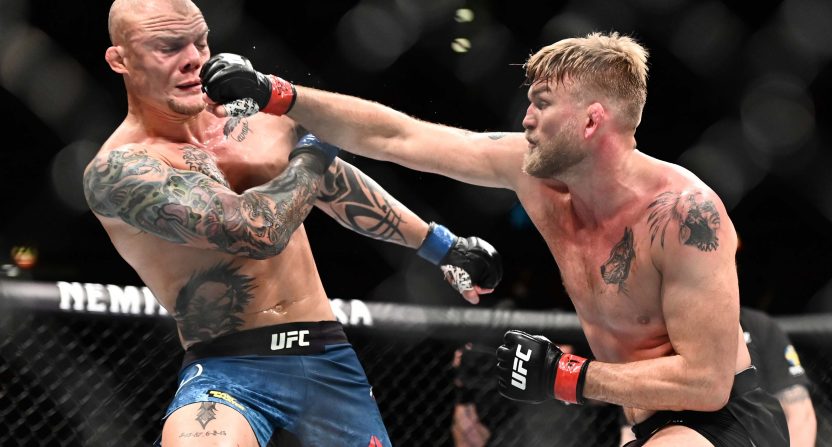 A week and a half after making The Athletic: Motorsports a thing and two weeks after expanding its WNBA coverage to every team in the league, The Athletic launched MMA coverage on Monday morning.

The staff carries a ridiculous amount of cache among MMA fans, too.

Subscribers get full access to storytelling that takes you beyond the octagon.

I typically don’t feel the need to run down the CVs of every writer The Athletic hires, since many of them all already well known, but I feel like it’s necessary to emphasize just how stacked this initial lineup is.

Fowlkes and Dundas, who co-host the wildly popular Co-Main Event Podcast (with a Patreon attached to it as well), announced to their Patreon subscribers this morning that the podcast would remain independent. In his introductory column, Gross said that his Gross Point Blank podcast would be folded under The Athletic’s umbrella.

In their introductory posts, both Stupp and Fowlkes were critical of the current MMA media landscape.

Additionally, mainstream media companies launched or gobbled up MMA sites, and to squeeze out as much revenue as possible, clicks and page views became the metrics that mattered most. Thus, salacious headlines, recaps of social-media spats, aggregation, out-of-context quotes and provocative photo galleries became the norm. For the folks who just wanted to cover MMA and tell amazing stories, it’s often been a demoralizing experience.

But there’s a lot about the MMA beat that’s changed in the last few years. You’ve noticed it. It’s happened across the entire media industry. The stories have gotten shorter, shallower. Many have operated on the premise that what you really need from MMA journalists is someone to read social media for you and then hit you with the highlights.

I don’t mean to criticize. (Well, not too much.) I get how and why it happens. When you’ve got to feed the click monster every day, you go with what works. Why write one Conor McGregor story with all the relevant info in one place when you can get more click mileage out of breaking it into three separate chunks?

The other new staffers expressed similar sentiments, along with a desire to write longer form, more in-depth stories instead of focusing on the social media sensationalism of the week.

However, while this is clearly a positive development for the MMA journalism landscape as a whole, it’s demanding even more cash from MMA fans. This fanbase has been expected to purchase pay-per-view events since the sport became a thing more than 25 years ago, but events on cable TV are becoming more and more scarce. The UFC has thrown a number of its events behind the ESPN+ paywall, and ESPN+ is now the company’s exclusive PPV provider. More Bellator events are on DAZN than are on Paramount Network. The PFL has also jumped behind the ESPN+ paywall. UFC Fight Pass, where a number of promotions stream and archive their events, still exists and costs twice as much as ESPN+. Between ESPN+, DAZN, and Fight Pass, MMA fans are looking at around $35 a month – and that doesn’t take the purchase of UFC PPV events into account.

Now, they’re also expected to shell out for an Athletic subscription for high quality MMA coverage. This isn’t some kind of MMA-exclusive deal breaker; there’s plenty of other “stuff” that comes with an Athletic subscription instead of just MMA coverage. But when a fanbase is expected to shell out money every month, nickel and diming them just a little bit more every month probably isn’t going to go over well, no matter how high quality the content is. Subscription fatigue is a real life thing, and MMA fans have been teetering on the brink for the last year-plus.

Sunday Night Baseball will be going with a two-man booth for the first time in more than half a decade.

Wild-card games drew from 26.4 million to 35.8 million viewers last year, so there could be a lot of TV benefits from this plan.

The XFL ratings saw a significant drop in Week 2, but their ratings were still pretty good. Will they be able to hold on to this new level of ratings?

The timing of this decision has rankled a significant portion of the Braves fanbase.

Sunday Night Baseball will be going with a two-man booth for the first time in more than half a decade.

Wild-card games drew from 26.4 million to 35.8 million viewers last year, so there could be a lot of TV benefits from this plan.

The XFL ratings saw a significant drop in Week 2, but their ratings were still pretty good. Will they be able to hold on to this new level of ratings?

The timing of this decision has rankled a significant portion of the Braves fanbase.