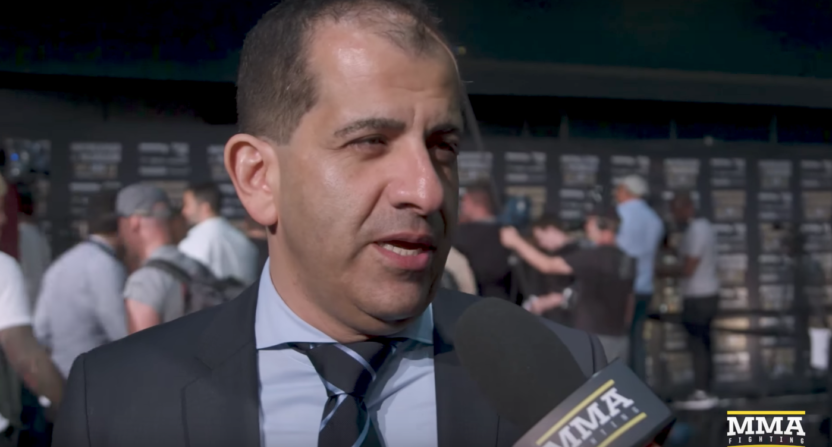 The run-up to the fight between Conor McGregor and Floyd Mayweather was always going to be chaotic. Both fighters are big personalities and willing showmen, so it is absolutely unsurprising that their promotional tour has been full of barbs, (sometimes offensive) insults and flying money.

But one guy who probably didn’t expect to be catching strays in all this was Stephen Espinoza, the executive VP of Showtime Sports, which is distributing the fight on pay-per-view.

Espinoza and Showtime have enjoyed a long and lucrative affiliation with Mayweather, leading UFC folks in McGregor’s camp to regard him with suspicion. When McGregor’s mic cut out at a recent event in Los Angeles, the fighter referred to Espinoza as “a fucking weasel,” while Espinoza denied messing with the audio.

Well on Friday, Ariel Helwani of MMAFighting.com posted an interview with Espinoza in which the executive expressed some serious exasperation with McGregor. After saying he didn’t think TV executives should be part of the story, Espinoza said,

I told you before the event my patience was running thin. I’m the last guy who is going to be get physical, but at a certain point, patience runs thin. I’ll leave it at that.

Asked whether his patience was running even thinner after Friday’s event in Brooklyn, where McGregor called him out on-stage, Espinoza replied,

“It’s definitely thinner now. Again, I’m surprised. I don’t know what to make of the fact that he’s focusing so much of his energy on someone other than Floyd. I’m not sure if he thinks he’s getting at Floyd through me. Floyd’s worked with a lot of TV execs, and he’s a loyal guy, but it’s not like he’s attacking one of his kids.”

Helwani then asked Espinoza about criticism from UFC president Dana White, who has sided with McGregor against Showtime and bashed the network for how it has promoted the fight. Espinoza responded politely at first, then slipped in a shot at White’s tendency to put himself front and center.

“Successful people are generally successful because they’re very strong-willed and have strong opinions. And Dana has come in with very strong ideas about how he likes things done, how he likes press conferences run. From our perspective, the way he runs press conferences de-emphasizes the fighter, and it emphasizes Dana, and that’s backwards. I understand that might be great for the UFC brand, but I think our goal, strategically and philosophically, is to try to place the fighters at the center of the performance. It’s a philosophical difference.”

For a guy who says TV executives shouldn’t be part of the story, Espinoza sure seems willing to engage with White and McGregor.

The McGregor-Mayweather fight is about six weeks away, and one thing is quite clear: If this fight doesn’t set pay-per-view records, it won’t be for lack of feuding in the run-up.