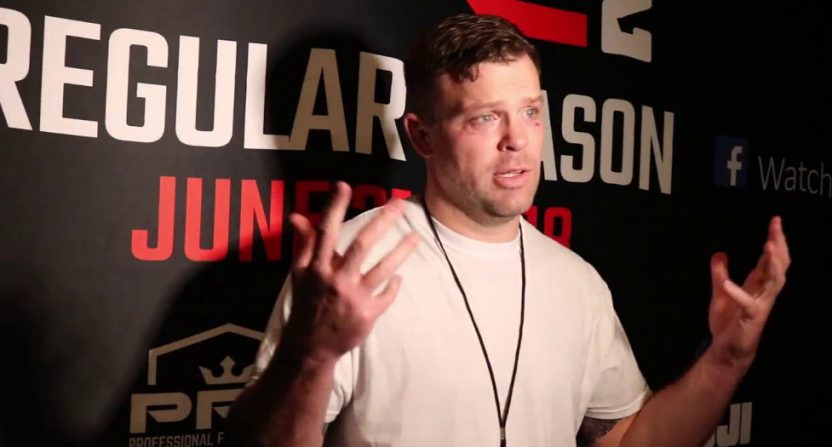 It’s pretty rare to see an analyst who’s also an active athlete, but that’s shown up a few times here and there with analysts who are injured (Greg Olsen), not playing on the particular day (Tim Howard), or even briefly coming out of retirement (Dale Earnhardt Jr.). It’s maybe even more unusual to see someone broadcast part of an event they’re also competing in, though, and that’s what Sean O’Connell did twice earlier this year in the Professional Fighters League.

O’Connell, who competed in several UFC fights between April 2014 and December 2016, signed with the PFL this year, and called preliminary fights on Facebook Watch before competing as part of the main card in PFL 2 (in Chicago in June, where he beat Ronny Markes by TKO; he’s seen above in a still from his post-fight press scrum) and PFL 7 (in Atlantic City in August, where he lost to Bazigit Atajev by TKO). He’ll be fighting in the PFL’s second of three playoff events, PFL 9, which takes place Saturday in Long Beach. Winners there must win two fights on the night, and they’ll will move on to the finals in New York City on New Year’s Eve, where a $10 million purse will be paid out across six weight classes.

Ahead of PFL 9 (which will be broadcast live on NBCSN in the U.S. beginning at 9 p.m. Eastern Saturday, and broadcast on Facebook internationally), O’Connell spoke to Awful Announcing about what it was like to call a match and then fight, what’s ahead for him on the broadcasting side, and what the PFL experience has been like so far. He said broadcasting and then fighting was a great experience.

“I loved it. It’s two things I’ve done for a long time now separately, announcing fights on local shows, announcing other sporting events. And then obviously I’ve fought for a long time now, but never had the opportunity to do it on the same night. And certainly not on such on a prominent national stage, international stage with the Facebook audience. So it was awesome, I loved it.”

O’Connell said broadcasting was a good way for him to not dwell on his upcoming fight.

“I’m the kind of guy who likes to remain distracted leading up to the fight, I don’t like to just sit there in the locker room and stew on what may or may not happen. I like to really dial in about 90 minutes before I fight, that’s when I start warming up and I really, really focus in, so it was a very pleasant way for me to occupy my thoughts and it worked out.”

In fact, he said fighting wasn’t really on his mind while he was calling matches.

“It wasn’t, actually. Maybe just cursory thoughts like ‘Oh yeah, I’ve got to do this here in a minute.’ But I was watching other people engage in their craft, our craft, and admiring strong performances, criticizing poor performances—whether that’s fair or not, because I’m going to go out there and put on a strong or poor one myself in an hour.”

O’Connell said while it’s unusual to be specifically broadcasting and fighting in the same night, that kind of mental separation is relatively common for fighters.

“It’s one of those things; if you’re a fighter, you have to compartmentalize fighting from your life. For me, it’s broadcasting or working and fighting, for others, it’s their family life and fighting, or financial struggles and fighting. Everyone in this sport has to compartmentalize and wear two hats or three hats or 10 hats, depending on what their individual lives are like. So I was fortunate enough to do something where both of those things in the same night were very public and two things that fans of this sport could focus on, but it’s really not uncommon at all for high-level mixed martial artists to have other jobs, other pursuits, other interests. And for guys who have a wife and kids, they have three or four things going on, not just two.”

He said his PFL 2 fight was particularly important, as it showed that he could handle doing both roles in one night.

“Against Ronny Markes, I went out there, slow start in the first round, but it had been pretty much a two-year layoff from professional competition before that, so ring rust was to be expected. And in the second round, I got it done and that was great. I wanted to prove to everyone that I could be good at both jobs and not just one or the other and the only way to do that was to give a good call on the prelims and then win the fight. If you don’t win the fight, people call into question whether or not should you be doing this, both things on the same night. But I won, so I proved the point.”

Analysts often have to walk a tough line when it comes to fair criticism of competitors, and that can be particularly tough for those who have competed recently themselves. It’s maybe even tougher for someone who’s still actively competing. But O’Connell said he deals with that by making sure what he says isn’t personal, and by considering how he’d react to on-broadcast criticism of his own performance.

“I think every sports broadcaster should try to keep their criticisms or analysis impersonal. People can tell me that I don’t move my head enough and I’m not a defensive enough fighter, and I can’t get offended by that because it’s just the truth, you know? When Bas [Rutten] and Randy [Couture] are watching my fight and saying ‘Sean’s got to move his head more,’ I’m not like ‘Hey, screw those guys, how dare they say something like that?’ I’m like, ‘Eh, they’re probably right.'”

“And in this sport, for people who have to have incredible confidence, there’s actually very few egos that are going to get butt-hurt over somebody in my position critiquing them. So it’s kind of nice. The culture of the sport allows people like me to wear both of these hats and not have people take it personally.”

O’Connell won’t be on the call on Saturday’s broadcast thanks to the way it’s set up, with the two fights in one night meaning there aren’t long layoffs. But he was a broadcaster before getting into fighting, doing radio shows in San Francisco and Utah (one of which helped him get into the UFC, after he surprised Dana White with a contract request mid-interview), and he’s had other media experience as a (sci-fi novel) author. He said his broadcasting stints this year have perhaps paved a way for a future career on that side. He said MMA broadcasting is an area he’s been trying to get into for a long time, and one he might transition into more fully next year.

“I don’t know that next year I’ll even be involved on the fighting side. The broadcasting side, I’ve been for years trying to parlay my success or lack thereof inside the cage into a position like the one PFL has put me in now. My first fight in the UFC, I said ‘You should also give me opportunities to work on the Fox desk or be some kind of analyst.’ And you know, those things fell on deaf ears because I wasn’t famous enough or I wasn’t pretty enough or whatever.”

“But PFL gave me this opportunity, and I think the experience has been satisfactory for both of us; I think they’re happy with my service on both ends and I’m obviously happy with what they’re doing on both ends. Moving forward, after I win this million dollars, I don’t know that I’m going to need to keep fighting. I would rather just focus on the broadcasting side of things.”

O’Connell’s been involved with many different MMA promotions over the years, from smaller early ones to the UFC to the PFL. He said he’s very appreciative of how the PFL treats its fighters, especially in comparison to the UFC.

“The PFL, I think, is a little more understanding of the realities we fighters face, and that’s a deliberate thing. The UFC knows what’s happening in fighters’ lives, they just don’t care. And that’s fine; they’re a major corporation, they’re now owned by an investment group that might not even watch the sport or care about the sport.”

“In the PFL, I have frequent contact with Ray Sefo, who’s the president of fighter relations, the big man on campus, and I’ve got regular contact with him. I’ve got regular contact with the CEO (Peter Murray), I have access to people who are the big money guys behind the sport and behind the organization. And they care, and they want to know what’s working for them, what’s working for me, what they need to do better to take care of fighters and how we can get more fans and get more people exposed to the new format and that kind of stuff.”

“The UFC is a phenomenal organization that has put mixed martial arts on the mainstream map, but somewhere along the way they forgot that the product that they are selling is the fighter, and that they have to take care of that product, and that they have to put out a good product by making sure that those people can focus on their jobs and not getting sponsors and things like that. The PFL I think is just a little more invested in their product, which is the fighters.”

O’Connell said he thinks that approach will pay off for the PFL in the long term.

“I think that’s going to prove itself out in future rosters; people are going to flock from other organizations to fight for the PFL. In a few months, there are going to be six newly-minted millionaires who won a PFL belt in a great format that’s all merit-based, that has nothing to do with your social media following or how handsome you are. It’s ‘Did you win the fights to get yourself here?’ And that’s the way the sport is. The entertainment side, everyone else can do what they want, but the sport should be the way that the PFL is running it.”

PFL 9 takes place Saturday in Long Beach, and will be broadcast live on NBCSN (in the US) and Facebook Watch (internationally) beginning at 9 p.m. Eastern.