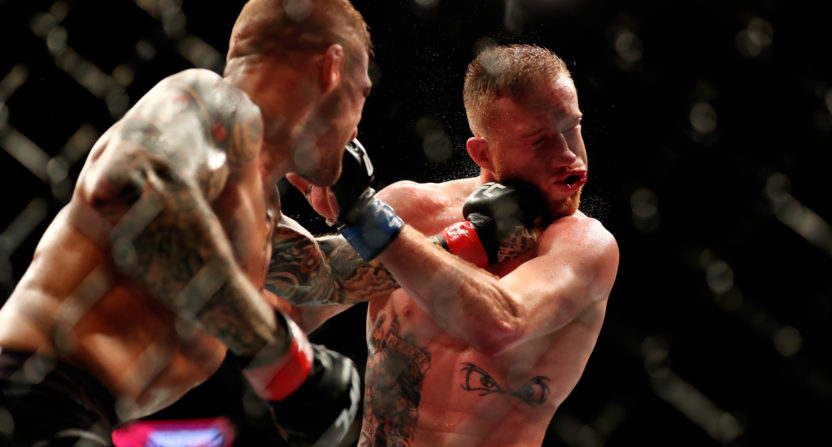 The UFC’s media rights picture may be clearing up a little bit. According to a report from Variety published on Tuesday, ESPN and Fox are talking about splitting the UFC’s TV package.

A key part of the deal from ESPN’s perspective, according to Variety, is “as many as 15 fight events” for ESPN+. The UFC would also see their media rights fee double, with ESPN reportedly kicking in at least the $120 million per year that Fox is currently paying and Fox potentially upping their cut to over $200 million.

According to sources with knowledge of the proposal, ESPN has signaled that it would be willing to pay $120-180 million per year to add the Endeavor-owned mixed martial arts league to its collection of live-event rights.

Fox, which currently pays $120 million per year UFC rights, would be willing see that number increase to a little more than $200 million. Fox’s current package includes four Saturday-night fights per year on Fox Broadcasting and a number of fight events on cabler Fox Sports 1 that has increased annually under its current agreement. A joint bid with ESPN would see Fox’s total number of events decline slightly.

It’s worth noting that this rumored bid between ESPN and Fox is quite similar to a rumored bid last week between ESPN and NBC, which also included fighter exclusivity for each network, the total number of pay-per-view events being slashed to six, and new weight classes.

But the ESPN/Fox alliance seemingly makes more sense because of their history in splitting rights, including with the Big Ten, Pac-12, and MLS. In fact, the Pac-12 deal way back in 2011 was done specifically to cut NBC out of the loop and leave it without TV rights for a BCS conference. Fox and ESPN teaming up to keep the UFC away from NBC is a logical move. It would also leave NBC with a hole in its lineup on USA if it loses WWE rights, which Fox is reportedly thirsting after.

However, there are plenty of questions coming out of this rumored deal, which were succinctly summed up by long-time MMA journalist Luke Thomas.

My initial reaction to the Variety report on the ESPN/FOX split on TV rights:

2. What does this mean for Fight Pass?

3. MMA fans have to buy another sub service?

4. What, exactly, is the value of airing on ESPN+?

This also comes on the heels of Endeavor, the UFC’s parent company, buying Neulion, the streaming company that runs UFC Fight Pass (but not ESPN+, which is run by BAMTech, owned by Disney). Why would Endeavor spend $250 million on a streaming company if it’s going to (presumably) remove events from a platform run by that company and put them on a platform run by another company?

UFC fans probably won’t be too thrilled if they’re going to need to pay for cable (FS1 events), Fight Pass, ESPN+, and PPV costs if they want to watch every event. Hell, they’re already not happy about having to pay for cable, Fight Pass, and PPVs, and even though ESPN+ is just another $5 a month, all of that adds up. Before Fight Pass existed, fans could get by with just cable and PPV costs – and even then, there weren’t as many PPV events as there are now, so fans were paying even less.

This is a difficult situation for all parties involved. If ESPN isn’t getting exclusive events (whether on ESPN+ or linear TV), why are they paying a triple digit fee? If Fox is getting fewer events, why are they paying the same or more money? If the UFC is moving live events off of Fight Pass, why did they drop nine figures on the company that runs Fight Pass (which admittedly has a massive catalog of past events) in the first place?

Until the UFC’s new TV deal is agreed signed, sealed, delivered, and announced, these questions will continue to linger, and there’s really no easy answer to any of them that will satisfy everyone.