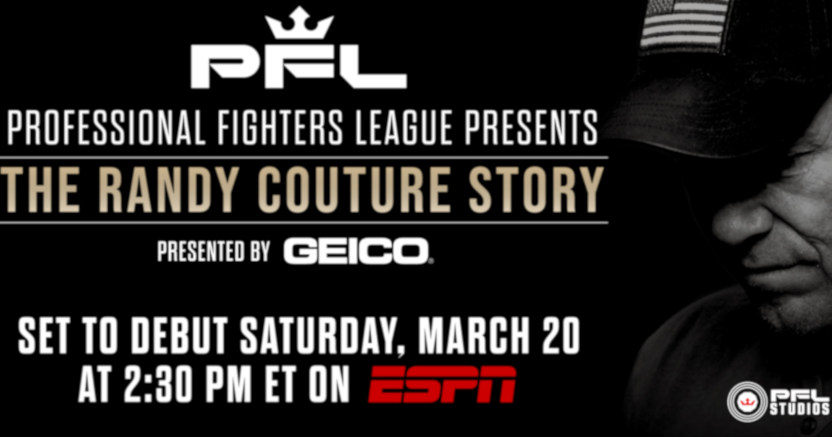 The Professional Fighters League MMA promotion cancelled their 2020 season entirely last spring due to the COVID-19 pandemic, and spent the time off not just preparing for a 2021 season, but also rolling out new studio content under their PFL Studios brand. One of the most notable projects announced there was The Randy Couture Story, a docuseries covering Couture’s career across wrestling, MMA, Hollywood, broadcasting and more. That docuseries is now set to have its first episode (of four) premiere Saturday on ESPN at 2:30 p.m. Eastern, with all episodes then available on demand on ESPN+ following that. Here’s more on that from a release:

The Professional Fighters League (PFL), the fastest growing and most innovative sports league, today announced that the first episode of its four-part documentary series, The Randy Couture Story, presented by Geico, will air on Saturday, March 20 at 2:30 pm ET on ESPN. The episodic series highlights the remarkable life of one of the greatest fighters of all time – Randy “The Natural” Couture – a six-time UFC champion and hall of famer.

…“It was a privilege for the PFL to produce “The Randy Couture Story” as he is an MMA legend, a true champion and an incredible person who inspired so many, as viewers of this series on ESPN will see.” said PFL CEO, Peter Murray. “Randy defined the sport of MMA, and we are proud to have him as part of the PFL family.”

“It’s an awesome feeling to have my own documentary series chronicling my journey as an MMA athlete and everything I’ve done outside of the cage,” said Couture. “The PFL is a global fighter-first organization and I wholeheartedly believe in the format and everything they are doing as a leader in the sport. I’ve been through so much in my life and I know how hard the PFL team has worked on this series. I can’t wait to watch it – it’s going to be special.”

Some interviewees featured in the series include former MMA star Chuck Liddell, actor Chris Pratt, Fox Sports’ Jay Glazer, and former MMA referee and commentator John McCarthy. This also follows in the wake of other long-form original programming from PFL Studios, including A Champion’s Journey (an eight-part series looking at different PFL champions’ path to titles), Fantastic Finishes (seven episodes reliving memorable knockouts and slick submissions across all six PFL weight classes), and Inside The Season (a 10-episode inside-access documentary on the 2019 PFL season).

PFL Studios is headed by PFL executive producer George Greenberg, who’s been with the promotion since their 2017 beginnings and previously spent 40 years in sports TV with Fox and ABC, winning 16 Emmys. Back in November, PFL CEO Peter Murray told AA that Greenberg and the studio division have brought a level of storytelling that’s helped to separate PFL content:

“For us, we’re a team of storytellers and marketers, and an example of that is PFL Studios, launching our dedicated longform and shortform production team. It’s led by George Greenberg, the former executive producer from Fox Sports, and before he joined the PFL, he ran production there, he was in the truck producing every UFC event when they were with Fox. This gives George an opportunity to present the sport a way it hasn’t been presented before from a production standpoint.”

There will certainly be plenty of interest in this particular docuseries, and it’s notable to see it get a first-episode premiere on linear ESPN. While many documentaries (including even some 30 for 30s) have gone straight to ESPN+, there’s still some solid reach from linear. And the hybrid distribution strategy here is interesting; it provides some exposure and a taste of the program on ESPN, but then the whole thing is immediately available for viewing on ESPN+, which alleviates some of the issues with audience drop-off with a series that takes place over weeks. And it fits with the closer integration we’re seeing between linear ESPN and ESPN+ these days, and emphasizes the advantages of both of those platforms. So we may see more content distributed this way going forward.

The timing here is notable too, as this is a good way for the PFL to put its upcoming season (which will begin on April 23 on ESPN2, ESPN Deportes, and ESPN+) on the radar. We’ll see how this docuseries works out for the PFL and for ESPN.