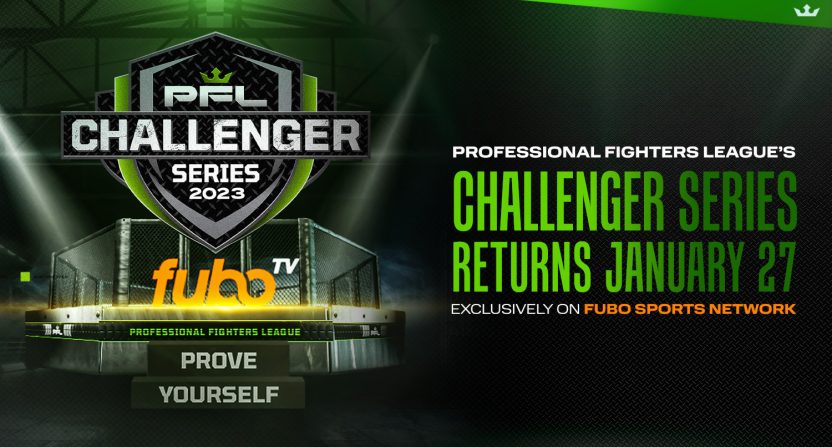 The Professional Fighters League bolstered their live event lineup significantly this year, perhaps especially with the February launch of the new PFL Challenger Series. That series, which ran on free ad-supported streaming channel Fubo Sports Network last February and March, saw fighters from around the world compete for PFL contracts. Four fights took place on each card, and one contract (either a full PFL regular season entry or a developmental contract) was awarded each night, with the contract awards determined by a panel of judges featuring both combat sports experts and celebrity guests.

One particularly notable success from the Challenger Series’ debut was Jamaican welterweight Dilano Taylor. Taylor won a contract in the Challenger Series, went on to the PFL regular season, and will be competing for welterweight gold and $1 million at the PFL World Championship Friday. And now, others will have the chance to try to follow that path. The PFL announced Wednesday the Challenger Series will return for a second eight-fight season, beginning Friday, Jan. 27 on Fubo Sports Network and airing there each Friday through March 17. Here are some quotes on that from a release:

“Professional Fighters League is the leader in creating unique, engaging competitions for MMA fans around the world and we’re thrilled to once again partner with FuboTV to be the home of the PFL Challenger Series,” said PFL CEO Peter Murray. “In just one year, Challenger Series established itself as a proving ground for future world title contenders – evident by the emergence of Dilano Taylor who looks to earn a PFL championship and $1 million winner’s purse this Friday night.”

“We’re proud to be the returning home of the PFL Challenger Series and give up and coming fighters an opportunity to get in front of our audience of engaged MMA fans,” said Pamela Duckworth, head of Fubo Networks and originals, FuboTV. “MMA and fight content continue to be wildly popular on Fubo Sports Network, drawing both audiences and sponsors to the network. As the exclusive home of the PFL Challenger series, we’re giving our audience even more of what they’re already craving.”

The Challenger Series was a significant departure for the PFL from their existing regular season fights, featuring up-and-coming fighters rather than established stars and that unique judging panel aspect. Murray told AA last November it was also a way to draw a slightly different audience than their main broadcasts and emphasize different elements on those broadcasts, including real-time data and betting:

“The PFL Challenger Series is really about pro fighters, many of whom are in the early stages of their career, who are aspiring to get to the season format or get a development deal with the PFL. …This product is going to be really a digital-focused product, a younger-skewing audience, and we’ll integrate data and betting, real-time betting within the stream. And then combine that with a panel of judges made up of icons, MMA icons, broader icons from sports, in addition to some entertainment personalities and giving fans a vote and a say on who should get the contract. That’s a real differentiator versus other properties out there.”

That mix certainly seemed to work out for the series in its first year, and Taylor’s success in the main PFL emphasized that this can be a development path as well. We’ll see how the second season of the Challenger Series goes for the PFL and for Fubo Sports Network.

[Graphic supplied by the PFL]