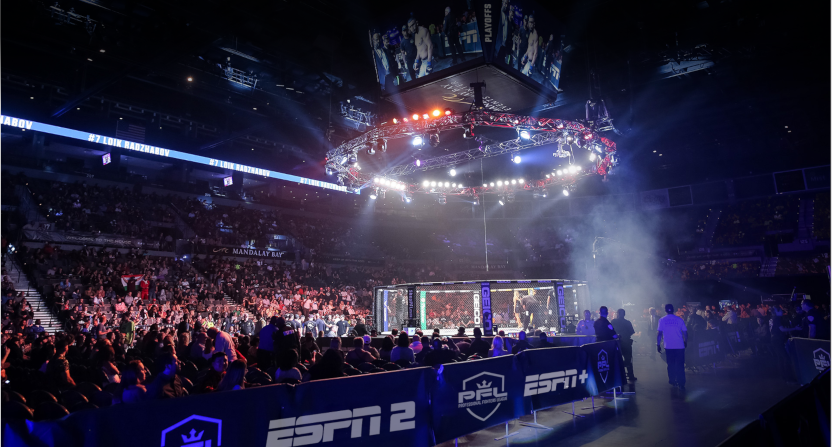 While many sports leagues have continued to put on games and events during the COVID-19 pandemic, the Professional Fighters League went a different route, and chose that route early. Back in late April, the PFL announced they were cancelling their 2020 season entirely, making plans to resume live events in 2021 but shifting their 2020 focus to studio content with the launch of PFL Studios (which PFL chairman Donn Davis discussed with AA back in June). PFL CEO Peter Murray spoke to AA recently on their studio content and their plans for 2021 (they’ve unveiled their full schedule, which begins on April 23), and he said the league’s decision to put off live events until next year and focus on studio content for now has worked out well for them.

“It was the right decision. Number one, it was safety first. We have fighters from 25 different countries, and the complexities with those fighters and the travel with their teams, it was really all about safety. And number two, it was about maintaining the integrity of our sport season format, which takes eight months to execute. It would have been impossible for us to execute.”

“What we’ve been doing in the meantime, we’ve been busier than ever. We’ve been maintaining brand visibility and growing our fanbase. We’ve launched PFL Studios, we greenlit four original episodic series on ESPN which started to air in September. We have a consistent weekly presence with new original programming promoting MMA and the PFL and our fighters.”

Murray said the PFL also launched their OTT platform (the PFL MMA app, which is free) in August, ahead of their initial schedule for it.

“We also launched our first-ever OTT platform; that was part of our pivot, and we sped that up. It was originally slated for 2021, but we sped that up. And we’re excited to be engaging fans daily around the world. We’ve unlocked our archives where we have the last two seasons of the PFL, full fights, the World Series of Fighting, that complete archive, and other content. It’s over 400 hours of content fans are engaged on.”

And he said they’ve seen significant growth from the content they’ve been putting out there, on ESPN, on social channels, and on the app.

“It’s created more interest in the PFL. There’s pent-up demand for it, and we’ve created new fans from our digital and social channels this year. We recently won an award from Cynopsis Sports Media as the league of the year in Instagram. We doubled down on content and created our own muscle to go direct to fans.”

On the distribution side, Murray said they’ve taken a wide focus, from U.S. deals  (including recent ones with streaming-TV providers WAVE.tv and fuboTV) to international ones (including deals with Eurosport and Telesport). And they’re hopeful their success with studio content will engage fans year-round, not just during their season. They’re also planning to distribute other live combat events, beginning next year.

“Beyond partnering with premier and leading sports media companies in the U.S. and in regions around the world to distribute both our live product and ancillary product, we’re also creating new partnerships to expand distribution on top of that. WAVE.tv is a good example of that. And we’re going direct to consumer day-to-day with our OTT platform.”

“And the PFL is not just an event company; we’ve now established that. We’ve expanded our content offerings beyond live events. And next year, fans can expect that we’re now a year-round content media company, and we’ll be launching a destination for combat fans. Beyond PFL live events and archival content on our OTT platform, the PFL will be distributing other live combat events year-round on its platform.”

The time off from their own live events also has the PFL team looking at ways to make their live product better when it returns in 2021. Murray said that starts with further bolstering their roster.

“In addition to that, my team’s been focused on improving the product for next season. How do you do that? First and foremost, fighters. We have a great roster already locked for 2021, but we have some select options for openings in certain weight classes to enhance the roster. I’m excited about our prospects and opportunity there.”

“That’s led by Ray Sefo, he’s our president of fighter operations. Not only do we have our own stars like Kayla Harrison and Ray Cooper, but we’ve also recruited stars from elsewhere in the sport. Rory MacDonald, the former welterweight champion at Bellator, he is yet to fight in the PFL, and fans are really looking forward to seeing how Rory competes and takes on this challenge and opportunity. The PFL is the toughest MMA organization in the world because our fighters have to fight four to five times in an eight-month window to become champion.”

Murray said they’re also focused on improving their technology, specifically when it comes to real-time data they can provide on broadcasts.

“Another differentiator beyond our true sports season format is technology. It’s a big part of driving innovation, leveraging technology in how we present the sport. In our SmartCage, it’s wired, we can measure athlete performance in real time in live fights. Last season, we measured punch speed on every fighter in every fight, and in 2021, I’m excited about the new innovation and how we’re going to expand the SmartCage’s offerings to include kick speed. Every fighter, every fight. We’ll be measuring that, and it ties to proprietary technology that we’ve developed and that we own. And it really creates a more immersive experience for fans when they’re seeing in real time a comparison of strike speed, both punching and kicking.”

“That’s valuable data for the fighters as they benchmark themselves and prepare for future fights. And it’s really advancing the sport. But also, it’s unique storytelling and context for fans. And beyond strike speed, we’re working on and we’ll be rolling out biometric data. Think of heart rate in a real-time situation, think of calories burned. And we’ll really get a sense to see how much power has been exerted, and if a fighter is gassed or not compared to the other fighter, and what that means. So we’re really excited about that.”

Rather than going to an outside company for SmartCage, the PFL developed that technology in-house. Murray said it’s important for them to be working on those products themselves, and they have the right group to do it.

“We have the expertise. We have a team at the PFL that has credibility and expertise in MMA combined with broader sports entertainment, media and technology capabilities. Our vision for the PFL is to reimagine and grow the sport and do it with distinction. And it’s all about product.”

“So, number one, we have the sport season format that’s disrupting the space and creating increased interest in the sport. We’re growing audience behind that and attracting top athletes. Number two, technology; there’s been no innovation in MMA in decades, zero, so as we look at other sports and have experience in other sports, fans expect that type of context and immersive experience. There’s nothing but white space, low-hanging fruit and opportunity, and we’re taking advantage of that.”

Murray added that they’re also focused on storytelling, which he thinks is an opportunity to further grow their audience.

“There’s no storytelling in the sport. It’s very transactional, tied to events. For us, we’re a team of storytellers and marketers, and an example of that is PFL Studios, launching our dedicated longform and shortform production team. It’s led by George Greenberg, the former executive producer from Fox Sports, and before he joined the PFL, he ran production there, he was in the truck producing every UFC event when they were with Fox. This gives George an opportunity to present the sport a way it hasn’t been presented before from a production standpoint.”

“So our live events are second-to-none, and we’re also telling stories about the athletes, very Olympic-like, during our broadcasts. And then beyond our regular-season, playoff and championship events, we’re engaging fans with stories about the PFL and about our fighters, year-round, on all platforms, linear as well as digital and social.”

Murray himself came to the PFL in early 2018 ahead of their first season, joining the league after time with Under Armour, RSE Ventures, William Morris Entertainment, the NFL and more. He said the league presented a great new opportunity for him, and he felt like there was major growth potential ahead for MMA.

“I launched it with an incredible partnership group on the board, in addition to a world-class ownership group with titans of sport, business, technology, and media. And we have a top management team with expertise. I joined to take this challenge and opportunity on because MMA is the growth sport of the next decade. 450 million fans around the world, all yearning for more quality MMA content, both live events as well as access to fighters and other content. We’re really fulfilling that demand amongst fans. It’s a huge addressable market.”

“And our thesis is very simple; there’s room for more than one leader in this sport. And in a short amount of time since launching the PFL, we’re now the number-one MMA organization in the world with global distribution, reaching 150 countries, attracting that fanbase within the 450 million fans. Our product is premium and innovative. And most importantly, we have the top athletes in the world competing in our format, in a model that’s worked for other major sports. We’ve achieved a lot of success in a short amount of time, establishing the format, growing our audience and distribution around the world, and presenting an innovative product. But we’re just getting started.”

He said the league saw significant audience growth from 2018 to 2019 with their TV events, and even without live fights this year, their studio and digital content is seeing good growth.

“Last year was a banner year for the PFL. We increased our audience by an average of 50 percent on ESPN, on linear. Our championship was up 100 percent on New Year’s Eve. And now, our digital and social audience, despite not having events, we’re growing our fanbase. And our digital engagement is up over 200 percent. That just really speaks volumes to the interest among fans around the world.”

“And on the distribution side, MMA is now a must-have in the portfolio of sports media companies because of the opportunity to bring new fans and new audiences to multi-sport platforms. It’s no longer niche, it’s must-have. And PFL is premium.”