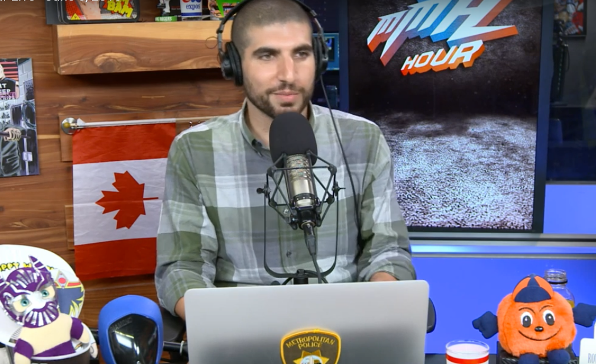 MMA reporter Ariel Helwani announced Sunday that he will be leaving ESPN on June 15. He made the announcement via his social media channels.

Wanted to let you all know that June 15 will be my last day at ESPN.

I have some very exciting news to share about my future very soon. Stay tuned for that.

This was 100% my decision. For now, I just wanted to share some thoughts on my time at ESPN: https://t.co/9rOtCliD96

He also made a ten-minute video on Instagram explaining the reason he was leaving, noting that the split was amicable.

“I want to let you know that there’s no hard feelings here. ESPN did offer me a new contract,” Helwani said. “I signed for 3 years back in 2018. They offered me a new contract. I was given the opportunity to look at what was out there for me and I found a lot of exciting opportunities and a lot of things that think the fans will really like and be pumped about, as I am as well. I’m not quite ready to announce that…I’ll tell you about that soon.”

The Syracuse grad referred to his time with ESPN as a “dream come true.”

Along with being ESPN’s top MMA reporter, Helwani also hosted the “Ariel Helwani’s MMA Show” podcast, as well as “Ariel & The Bad Guy” and “DC & Helwani” with former UFC champion Daniel Cormier. Along with his work in MMA, Helwani briefly served as a sideline reporter for NBA games, which he referred to in his Instagram video as “one of the main highlights of my time at ESPN.”

Helwani did note in his video that leaving ESPN after three years wasn’t the plan when he initially arrived.

“I’d be lying if I said I’d go there and leave three years later,” Helwani said. “But this is a crazy world, a crazy business.”

In April, the NY Post reported that ESPN and Helwani were locked in intense contract negotiations as his three-year deal was coming to a close. Per the report, the reporter was making “a little less than half a million dollars per year” and was likely looking to bump that up given his presence in the MMA community and the coverage he was doing for ESPN.

However, as we’ve seen in recent years, ESPN has no problem walking away from talent with a high price tag. They recently parted ways with longtime SportsCenter host and mega-personality Kenny Mayne and the recent rounds of layoffs have seen many big names walk out the doors in Bristol.

What’s different here is that unlike many of the people ESPN let go in recent years, Helwani is still in his prime with plenty of potential ahead. It’s hard not to consider the antagonistic relationship that UFC president Dana White has had with Helwani as a potential reason that ESPN was willing to part ways with him. Helwani was already dropped by Fox Sports due to White’s disdain for the reporter, who broke stories that the MMA organization didn’t like, and the popularity of the sport means that broadcasting rights are a big deal to sports broadcasters like ESPN.

Most notably, White referred to Helwani as a “douche” in February during the Gina Carano firing controversy, which involves Disney, ESPN’s parent company. The criticism was heightened by the fact that Helwani, who is Jewish, was responding to Carano’s comments about how being Republican in America is comparable to how the Jews were treated in Nazi Germany. While some of his ESPN co-workers came to his defense, it took ESPN three days to publicly support Helwani from the attack.

While Andrew Marchand has previously reported that Meadowlark, the new sports venture by former ESPN boss John Skipper and radio host/podcaster Dan Le Batard, has shown interest, he is now reporting that Helwani’s next stop will be with Action Network.

NEWS: Ariel Helwani is head to the Action Network, The Post has learned. w/@J_Tasch https://t.co/T2LJRAdRdg

Per Marchand, Helwani will be the betting platform’s MMA expert. He’ll also be joining some other former ESPN personalities, Darren Rovell and golf writer Jason Sobel. Marchand also notes that Helwani is “expected to also work for other entities” and that doing something with Meadowlark remains a possibility.

Action Network was acquired for $240 million by the Denmark-based Better Collective in a move meant to expand U.S. operations. Bringing in Helwani would be a big step in that direction.

UPDATE: Marchand has issued a correction, noting that while the deal isn’t actually done, it still looks likely.

I was told incorrect information by a primary source that the deal was completed. It still may get there, but nothing is signed yet.