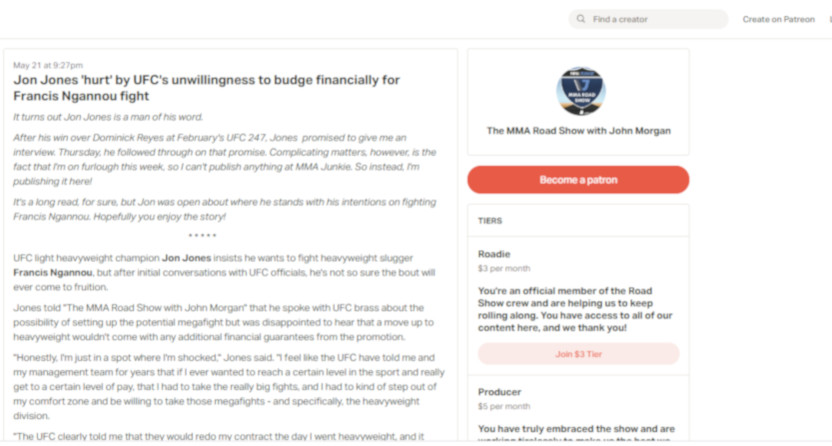 Many media organizations are facing revenue shortfalls thanks to the COVID-19 pandemic, and that’s led to a lot of layoffs and furloughs. Some of those are at USA Today parent organization Gannett, which announced week-long rolling furloughs for reporters and editors in March. One of the currently-furloughed reporters is MMA Junkie’s John Morgan, but his furlough sure came at an awkward time, as it coincided with MMA star Jon Jones finally giving him an interview that had been promised in February. So that led to Morgan publishing the interview on his MMA Road Show Patreon page (it can be read for free there). Here’s Morgan’s tweet about this:

Remember that @JonnyBones interview promise from #UFC247??? Today, he delivered.

In a weird twist of COVID-19 influenced fate, it happened while I'm furloughed from @MMAjunkie, so I can't publish it there. But you can read it on @Patreon, instead: https://t.co/7hd4a7Tzbu pic.twitter.com/N69ipJpr3X

The interview’s a notable read for MMA fans, featuring Jones going off on UFC management for not offering him a significant guarantee to move up to heavyweight and fight Francis Ngannou, which he calls “the single riskiest fight in the UFC.” It also has Jones complaining that management promised him before that they’d give him bigger deals if he moved up to heavyweight, and claiming they’re now reneging on that. (It’s not like the UFC has ever come under fire for not doing what they say they’ll do.) But the even more interesting angle here from the media side is this interview coming to a furloughed reporter, who then put it up on his own site.

While there may not be many live sports going on at the moment, there’s still a significant demand for sports content. And the heavy furloughs for sports media members aren’t necessarily the wisest long-term strategy. Claims like that of Vox Media CEO Jim Bankoff that sports is an “editorial area where short-term demand will be lower” aren’t necessarily holding up, as there’s been a lot of interest out there in well-written pieces even with no live sports, whether those are reports on various leagues’ plans to return or creative looks back at the past. A notable entry in that latter category is Chris Ballard’s final Sports Illustrated piece, on historical running figure Jim Fixx, which drew excellent traffic for SI:

The clicks and likes and comments on this story… About a runner. Who so few people know—not an A (or Z) lister. Whose tale is too nuanced to do justice in a tweet. Surprise: people like good/unique/differentiated things. Quality trumps quantity, every day, always. https://t.co/LC8usY5evO

And many furloughed or laid off people are finding ways to put out their own content and reap the rewards, whether that’s with an upcoming fiction ebook from Banner Society writers or with the variety of independent sports newsletters or with Patreon moves like what Morgan did here. And maybe that goes to show something larger. Gannett decided they didn’t want to pay Morgan to write for them this week, so they wound up missing out on a good exclusive that there’s a lot of interest in. Vox decided they didn’t want to pay several of their Banner Society writers for three months, so those writers decided to go directly to readers and got a lot of support for doing so. And several of the newsletters seem to be doing okay, at least as a stopgap, which is impressive given the overall state of the world.

There seems to still be a lot of demand for good sports content, and while monetizing that still carries challenges, it’s notable that there’s still interest in that content even after employers have decided to furlough or lay off the people producing it. And this is certainly an era where it’s more possible than it was before to make an impact outside a big corporation. And in this particular case, it’s nice to see a prominent athlete like Jones give an interview to a writer even while that writer is furloughed.

Of course, that doesn’t mean that every furloughed or laid-off writer is going to be able to make it on their own, and there are certainly some challenges to taking that path as well. But it’s notable to see some big stuff, like Morgan’s Jones interview, coming from people media corporations have decided weren’t worth employing for a while. What those people are putting out is still valuable to many readers, and this interview is the latest case of that.