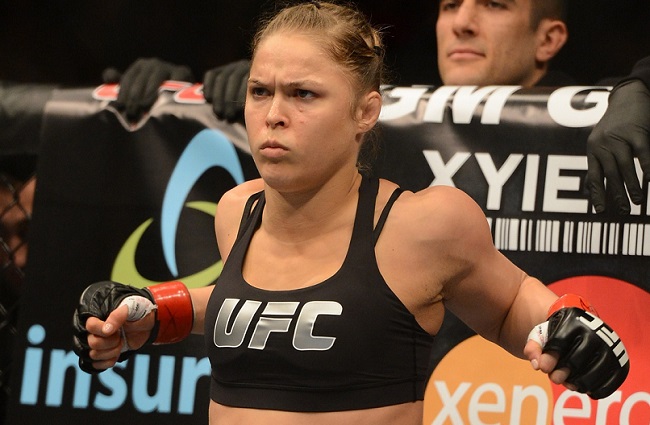 There have been plenty of people criticizing Ronda Rousey following her UFC 207 loss to Amanda Nunes Friday, but saying her rise and popularity was a “rig job” thanks to a “liberal agenda” from “establishment media”? Those are some bold takes, and they just so happen to come from our This Week In Hot Takes overall standings leaders, Fox Sports’ Jason Whitlock and Clay Travis. Let’s start with Whitlock, the failed Undefeated editor who’s now the co-host of FS1’s Speak For Yourself:

Face you make when you win the popular vote, but the Russians hacked the electoral college. pic.twitter.com/g7v2o68NfT

Hey, jackwagon, I don't believe in the Russian hacks. It's a joke. https://t.co/QxsJAEfAT3

Perhaps Whitlock is cognizant of SFY’s low ratings and is angling to replace Megyn Kelly at Fox News? As for Travis, the controversial Fox Sports Radio morning host/Outkick The Coverage writer? He goes even beyond establishment media to blame a “feminist movement” and a “liberal agenda”:

Ronda Rousey's career was a media-driven feminist movement that was exposed as a complete fraud.
— @ClayTravis. https://t.co/dIuhNlrAKO pic.twitter.com/9ybNMfBkfp

Here’s the actual segment, if you can stomach listening to 3:30 of Travis ranting about Rousey:

“There were a ton of people in the sports media who wanted Ronda Rousey to be good because it represented their belief that women are better than men.” What does that even mean? Rousey wasn’t fighting men, and it’s unclear why her loss to another woman has anything to do with a “liberal agenda.” It’s also worth noting that the UFC has significant control over which fighters are promoted and given headline fights, and few would say they’re an ultra-liberal organization; UFC president Dana White even spoke in support of Donald Trump at the Republican National Convention this year.

There were plenty of people promoting Rousey externally too, of course, but Fox was one of the most significant. They hold the UFC rights and did a ton to hype up Rousey’s fights, plus had her as a guest on their studio programming. Oh, and after one of those appearances back in 2015 where Travis talked to Rousey, he was singing a very different tune about her:

Let’s explore that 2015 piece from Travis in more detail:

I think Rousey would win. I really do think, she would beat Floyd Mayweather’s ass. (Chances are, many of you feel the exact opposite way. Which is why this fight needs to happen. When was the last time that we entered a big fight with relatively even odds?)

Ever since Ronda Rousey put me in an arm bar in the Fox Sports green room and chose not to break my arm, I’ve loved her. So there I was on Saturday night, buying my first ever UFC fight on pay-per-view. Next thing you know you find yourself awake well after midnight watching all these guys fight each other, rooting for them to beat each other’s asses as fast as possible, so you can get to the main event, we all wanted to see Ronda fight.

Thirty four seconds after it began her fight was over, and I felt like I’d seen the ghost of Mike Tyson.

So, going by that, Clay Travis is himself one of those liberal agenda-driven feminists who created the “fraudulent” Rousey, no?

Fox has made no secret of their continued desire to embrace debate despite how far they trail ESPN in the ratings, but it’s interesting to see some of their personalities making their hot takes more and more explicitly political. It’s almost as if Whitlock and Travis are employed as in-house provocateurs, tasked with applying right-wing takes and analogies to everything to see what will get traction, regardless of if there’s any actual merit or connection. See also Whitlock’s thoughts on cyberhumans and culture wars, for example.  (For what it’s worth, FS1’s best-rated debated show in Undisputed has largely stayed out of the political waters.)

As we’ve seen with the rise of media outlets like Breitbart and the traction fake news has gotten on social media, there is enough distrust of mainstream media that stories and media companies that piggyback on the back of “liberal” or “PC” narratives can thrive. That said, when you see the amount of mental gymnastics required to make some of these narratives work, you wonder if Fox or any national sports outlet will find much success playing this game.