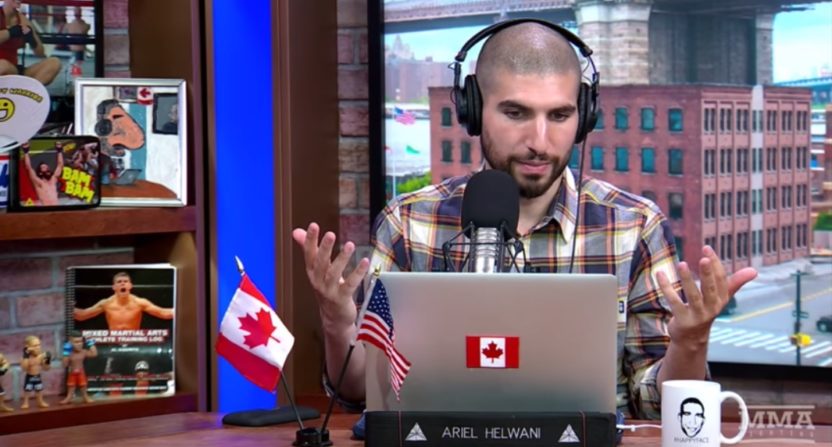 Today, a new report (also from Andrew Marchand at the New York Post) includes the fact that Helwani was offered a new deal to remain at ESPN, but that he would have had to take a pay cut to do so.

But, where ESPN’s business is in relation to retaining many of its on-air personalities, Helwani was worth enough to offer a pay cut. Helwani, who was in the final year of his three-year rookie contract with ESPN, made a salary that approached $500,000.

ESPN initially offered a 10-percent reduction in pay and followed up with a five-percent cut, according to sources. ESPN and Helwani said he could have stayed, but really, how could he in the prime of his career with gambling companies doling out money left and right?

Obviously there was no way Helwani would be staying at even just a flat rate, much less a cut of any number. So, why would ESPN be unwilling to even try to compete with outside opportunities in this case? Helwani is a big name in MMA reporting, and his social following is such that he brings his own audience with him, to a degree. He’s a valuable asset, in a sport that is a big source of ESPN+ subscribers.

For one thing, UFC boss Dana White has never liked Helwani. Marchand’s reporting is clear to note that wasn’t a factor, and that both ESPN and Helwani would have been open to him staying on. It wasn’t a force out at the behest of a rights partner. But it probably didn’t help incentivize ESPN to offer what it would have taken to keep Helwani in-house.

That rights deal is another big factor, too; for the company as a whole, ESPN+ is a huge deal going forward. UFC is a big part of that, and as such the revenue driven in the form of subscription fees matters a lot more to ESPN than whatever traffic Helwani might bring to digital spaces. ESPN knows Helwani will be going somewhere else, and taking his audience with him, but he’ll still be covering the UFC, and if his audience wants to watch, they’ll still have to subscribe to ESPN+. Having Ariel Helwani covering the sport is still good for ESPN, whether they’re paying him to do it or not.

For Helwani, the benefit is obvious: the money is going to be a lot more, even if he’s no longer working for just one centralized company.

Helwani should do just fine outside of ESPN’s universe and may even top a million. He has had significant talks with the gambling site Action Network. There is an obvious link with Meadowlark, from his relationship with Dan Le Batard and company, dating back to both formerly receiving checks with Mickey Mouse on it.

Helwani will likely end up with a few deals that are with or supported by sports betting platforms.

Taking these factors into account, it becomes more obvious why ESPN would be okay letting Helwani walk, and why Helwani would be secure in testing the waters.

It is, though, something to monitor, especially in the wake of Kenny Mayne also being offered a pay cut after decades of service.