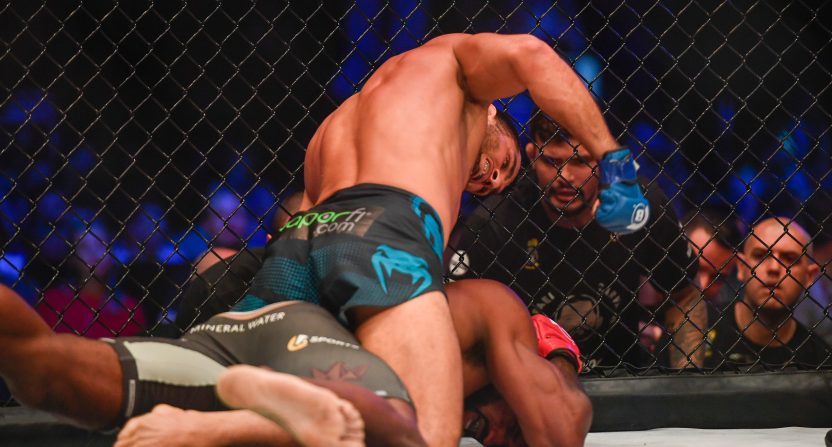 Sports streaming service DAZN (pronounced DA-ZONE) and the Viacom-owned MMA outfit Bellator reached agreement on a five-year deal worth well into nine figures to broadcast 22 events per year on an OTT platform looking to make further gains in the U.S. prior to its American launch in September, DAZN announced on Tuesday.

Combined with last month’s eight-year, $1 billion deal DAZN reached with Matchroom to show 32 boxing cards per year on the platform, DAZN will now prepare to offer a comprehensive monthly subscription streaming fight package to an American audience, according to Juan Delgado, the CEO of Perform, DAZN’s parent company. Delgado spoke at length with Awful Announcing prior to the Bellator deal being made public.

Though Delgado wasn’t exactly sure how much the combined Bellator-Matchroom package would cost, he said it would be accessible and less than $200 per year. During each year of the agreement, 15 events will be broadcast on Viacom’s Paramount Network and simulcast on DAZN, while seven cards would be exclusive to DAZN. The first fight card of the agreement is a big one on Sept. 29, when MMA legends Rampage Jackson and Wanderlei Silva and champions Rory MacDonald and Gegard Mousasi lead a star-studded card at the SAP Center in San Jose.

DAZN’s goal for this fight package, per Delgado, is to “create a schedule where hopefully at least at the back end of this year, you’ll have a live fight every week leading up to Christmas.”

This announcement is a big deal for Bellator as well, and is predicated on “supercharging the franchise,” Delgado said. “We hope with this partnership, this investment, they are actually going to be a very clear competitor to UFC in terms of acquiring talent, in terms of the quality of fight cards they put together, and ultimately the fan base they build around the franchise.”

Trying to align with Viacom, Delgado wouldn’t disclose exactly how much the five-year deal was for, differing from disclosing the Matchroom deal. Delgado would also neither confirm nor deny if this deal included an equity stake for DAZN in Bellator.

“The investment will enable us to continue expanding our roster with free agents that make sense, so we can put on PPV-worthy fight cards that fans want to see,” Bellator President Scott Coker said in a press release. “Plus, on DAZN’s worldwide platform, our fights will be seen live for the first time to new audiences around the globe.”

A major selling point for DAZN in its first year with Bellator will be a continuation of the outfit’s Grand Prix format, a bracket style tournament to determine a champion. The current focus is on the heavyweight division, but the Sept. 29 event will commence Bellator and DAZN’s Grand Prix featuring welterweights, which Delgado thinks “will have the most interesting storylines and the most fan engagement.”

The real heavyweights of MMA, UFC, recently made a streaming-centric rights deal of its own with ESPN, the timing of which is curiously similar to the DAZN-Bellator announcement. Delgado said that was purely coincidental. With DAZN operating in Canada, Japan, Germany, Austria, and Switzerland and expanding to the U.S. and Italy this year, Delgado said that they’re serious rights bidders around the world, so naturally there were talks with UFC so some extent. But Perform and DAZN found Bellator to be the best fit, according to Delgado.

“We find Bellator to be an efficient set of rights, to not say anything sort of detrimental about our friends at Endeavor or IMG,” Delgado said, “it just happens to be that we were in parallel conversations and Bellator was willing to play ball. They got behind our vision that we’ve laid out in other markets and we’re laying out in the U.S. with DAZN and we got a deal done.”

Unlike UFC, though, DAZN isn’t interested in the linear programming it provides with Fox Sports and eventually ESPN. There will be no live weigh-ins or Ultimate Fighter type shows, no pre and post-match shows, and no fighter-driven reality content.

“This deal is about live fights,” Delgado said.

What DAZN will focus on, per Delgado, is a 24/7-like program leading up to some of its’ major fights that’s more geared toward mobile and social, and far shorter than a typical 22-minute traditional TV window.

“You have to cater to fans’ consumption patterns, which are now on their phone, mostly on the move, very short attention spans,” Delgado said.

DAZN likes to call itself “the Netflix of sports” for the many rights deals it’s made abroad, including rights to NFL Sunday Ticket and Red Zone in Canada and NBA rights in Germany, and DAZN’s U.S. fight package is the first step in becoming a player here. Delgado said that they’ll hopefully announce other verticals soon, but saw an opportunity to make its entry domestically through fight sports. Those allow you to build a subscriber base “to potentially, eventually go after some of the bigger rights packages,” Delgado said, adding that having relationships with the four major sports in the U.S. can only help down the line.

“Obviously in the U.S. it’s a different ballgame with the cost of the right as well as the audience that you’re looking to address,” Delgado said. “You just have to make the equation work.”

Delgado said that he wasn’t sure who would broadcast the Bellator matches starting in September, but likes the work Mike Goldberg is currently doing for Bellator on Paramount.

“We won’t reinvent sports broadcasting, but we will reinvent the way it’s distributed,” Delgado said.