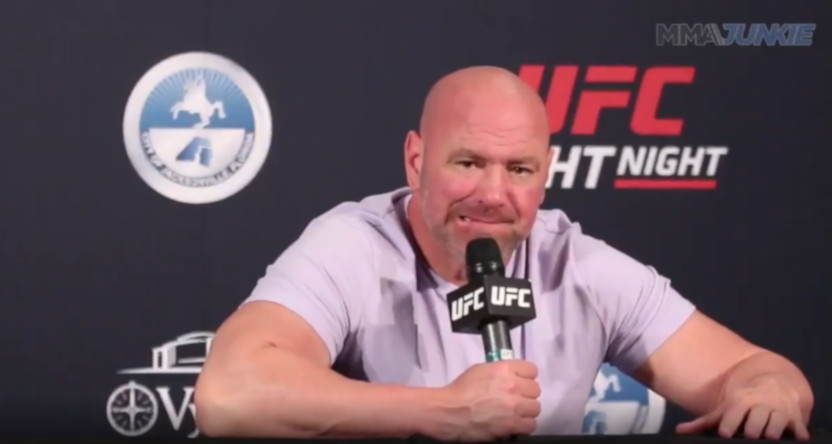 There’s been a long history between veteran MMA journalist Ariel Helwani and UFC president Dana White, including apparent UFC pressure behind Fox pushing Helwani out in 2016, an attempted for-life ban of Helwani later in 2016 (which was eventually reversed), the formation of the MMAJA in 2017 to provide a formal group to push back on UFC demands (with Helwani as vice president), and White (seen above in May 2020) reportedly applying pressure to get Helwani kicked off the Mayweather-McGregor press tour later that year. Since then, Helwani has joined ESPN (in 2018) and discussed how they “had his back” in a way that Fox didn’t. But ESPN is still a UFC rights partner, and White (who’s still the UFC president even after their 2016 sale) has continued to take pokes at all sorts of journalists, including Helwani. And that went to a particularly interesting level this week with former UFC star turned actor Gina Carano getting fired after posting antisemitic memes (there’s good reason for using that term without a hyphen), and with White defending her and taking a shot at Helwani (who is Jewish) for his coverage of that:

Here's Dana White calling Ariel Helwani – a Jewish man – a "douche" for having an opinion on Carano's repeated, and very public anti-semitism.

Defending MMA (& pro wrestling for that matter) has always been an uphill battle but these last few years have been incredibly trying. pic.twitter.com/DWnmitFCxH

This is a ridiculous comment from White, especially considering the substance of the “mistake” Carano made (she shared an antisemitic Monopoly meme in December, made posts comparing the Holocaust to political dissent today, and tweeted about debunked election conspiracy theories). It’s absolutely absurd for the president of a professional sports organization to defend that. But that fits in with a long history of people tolerating White’s unprofessional behavior, so it can’t be said that it’s too surprising. Still, this particular comment was especially bad, and that drew flak from even the likes of former ESPN host Dan Le Batard:

If @ESPN is interested in journalism, it can ask some questions here of bully and corporate partner @danawhite. There is certainly a douche here. But it ain’t the journalist @arielhelwani. Pick a side, ESPN. Quiet is complicit. — Dan https://t.co/hPLzHI8v1K

There are of course a few points of context to consider here. First, Helwani has appeared on Le Batard’s show before, and was remarkably cool even after Le Batard unnecessarily called MMA “the damn sewer.” (And those comments are worth consideration on their own; it’s not like Le Batard was promoting the UFC or friendly with White, and some of his comments about the sport have been unnecessarily antagonistic.) Beyond that, Le Batard just went through a very public divorce from ESPN, and it’s a lot easier to criticize a giant corporate entity when you’re on the outside. But none of that obliviates Le Batard’s larger point about White being the particular “douche” in this scenario, and Le Batard is quite right that ESPN has long been too eager to overlook problems when they come from a rights partner.

Look, overall, none of this probably means too much in the end. But this flare-up is interesting, especially as a further revelation of how flawed White is as the public face of the UFC. There was zero incentive for him to contribute anything to Carano’s defense; she is not a current UFC fighter, and no one really expects to ever see her in competitive MMA again. But he still decided to use the discussion around her as a reason to take a shot at Helwani, and that’s an awful look for the man who’s the main face of a supposedly-professional sports league. Nothing here is likely to lead to any change, but this saga is a good illustration of just who White is; he’s not someone making smart business decisions for the UFC, and he’s not someone acting like a reasonable head of a credible professional sports league, but he is someone who’s willing to carry petty grievances forever and who’s willing to waste his public capital defending former UFC-affiliated fighters against reasonable media coverage. And UFC owner Endeavor should consider very carefully if it’s still to their benefit to have a PR liability like White representing them.