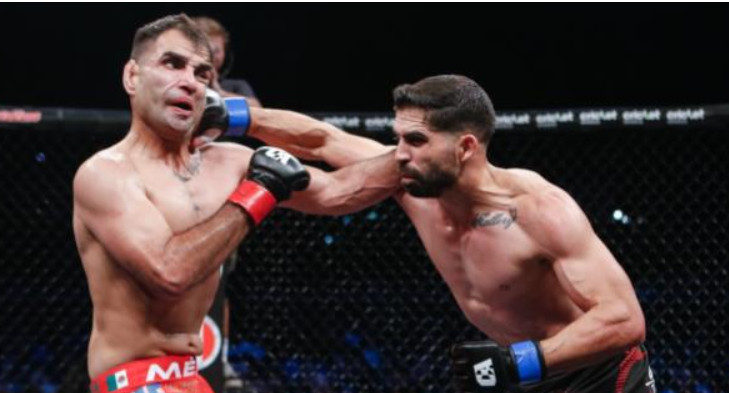 Plenty of leagues have been working on their return plans, and MMA promotion Combate Americas is the latest to announce theirs. The promotion announced Tuesday they plan to resume holding fights with an event Saturday, August 28. That event will  held at a closed-set studio in Miami and will be headlined by the Combate Americas world flyweight (125 pounds) championship contest between Juan Puerta and David Duran (seen at right above in a previous Combate Americas fight).

Combate Americas also has announced that they’ll be holding subsequent fights in that Miami studio on Sept. 11 and Sept. 25. And while there won’t be fans in attendance at these events, the promotion is adding some new interactive elements to their broadcasts. As per a release, those broadcasts “will feature on-camera interactions with a host of different celebrities to be announced soon” and “will also include fan polling and voting, as well as a social media ticker on-screen.”  Here are more details from a release:

Combate Americas today announced that it will return to live television with a sports industry-first, interactive new Mixed Martial Arts (MMA) fight series from a state-of-the-art closed set in Miami, Fla. on Friday nights, beginning August 28, and continuing with two special events on Sept. 11 and Sept. 25 in celebration of Hispanic Heritage Month.

…“As live sports return to television, Combate Americas is going to utilize this closed set studio series to deliver something that fans have never seen before and that will bring them closer than ever to the action from their screens,” said Combate Americas CEO Campbell McLaren.

Safety precautions are obviously a concern for any resuming league, and we’ve seen some different approaches to that from promotions, including the UFC and Top Rank. The Combate Americas release outlines that they’ve hired a dedicated physician “to administer COVID-19 testing of all athletes, officials and staff prior to the show and to supervise the health of all personnel on-site in Miami,” that their Los Angeles-based staff will undergo COVID-19 testing before heading to Miami for this, and that “All athletes and their respective corner people as well as all Combate Americas staff and officials will undergo both COVID-19 and antibody testing in Miami, in accordance with the new Florida State Boxing Commission requirements.” We’ll see how this return to action goes for them.