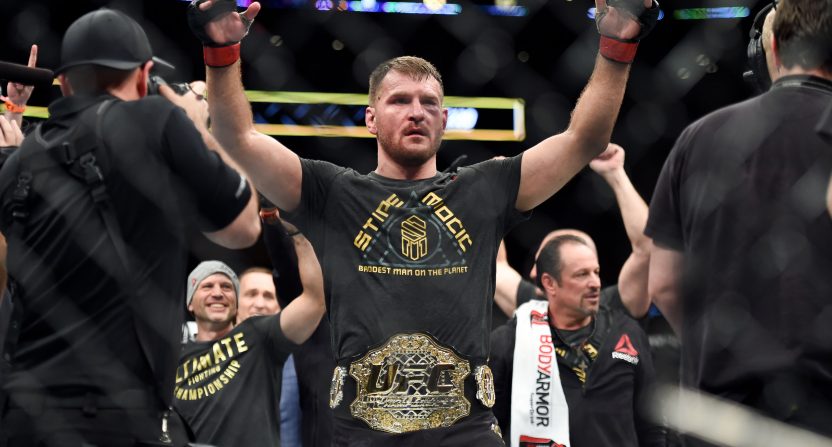 On Wednesday, the UFC reportedly agreed to a five-year, $1.5 billion deal with ESPN that shifts all of its rights, both linear and digital, to the Worldwide Leader. The agreement represents the rights fees bounty that Endeavor had been seeking over the last year, and will undoubtedly be a good thing for the UFC.

But with that being said, there are some questions that need answering with the deal still more than half a year from starting.

1. When are these events going to be airing?
The TV deal between the UFC and ESPN reportedly contains 12 PPV prelim events per year (which typically last around two hours). UFC PPV events take place on Saturdays. This creates one hell of a scheduling conflict with ESPN, which is overflowing with college football and basketball rights. UFC PPV prelim events typically start around 8 PM EST on Saturday, right around the time that the top college football and basketball games are starting.

Premium games aren’t being shifted off of ESPN or ABC, and I doubt they would be bumped off of ESPN2 either. So…the UFC prelims on ESPNEWS in the fall? That’s hardly encouraging, especially given the uncertain future of the network. But if either ESPNEWS or ESPNU is rebranded, perhaps into the ACC Network, that would theoretically fill up a two hour slot on ESPN2 for prelims before a 10 PM west coast game.

The Fight Night events, which will number ten per year, are a bit more flexible. Though they typically air on Saturday nights, they’ve also aired on Sunday nights and, most famously during the Spike era, on weeknights. The same Saturday conflicts will still exist from September through early March, and I doubt ESPN would want to go head to head with Sunday Night Football in the fall. Maybe this could lead to the ESPN+ exclusive events (20, with five more joining the previously announced 15 per year) mainly taking place during the fall and winter, and the events airing on linear TV coming in the spring and summer.

2. What’s going to happen to UFC Fight Pass?
When the ESPN+/UFC deal was announced, my first thought immediately went to Fight Pass, because that agreement gave ESPN rights to UFC’s library. With ESPN now taking over the entire package, it would make a whole lot of sense to fold Fight Pass into the ESPN/ESPN+/BAMTech family. Of course, it’s easier said than done, given that Neulion powers Fight Pass…but then again, Endeavor (the UFC’s parent company) bought Neulion earlier this year and can do whatever the hell they want with it, which could include flipping it to BAMTech and folding Fight Pass into their portfolio.

Fight Pass will no longer be a necessity for UFC fans, with all of their exclusive streaming events moving over to ESPN+. With the service also acquiring UFC’s fight library, Fight Pass will be limited to streams of non-UFC MMA events (Invicta FC, etc) and (I assume) the fight libraries of defunct companies like PRIDE and WEC. This would make Fight Pass more of a luxury item rather than an essential one for American fans, but the loss in subscription revenue there would be more than balanced out by UFC’s new rights fees from ESPN.

3. How is Fox Sports going to fill out their schedule?
A somewhat underrated part of the UFC heading to ESPN is the holes that it will create on Fox’s schedule. FS2 essentially exists as a vehicle to air reruns of UFC fights and soccer. FS1 airs pre and post fight coverage, fight nights, prelims, and studio shows. That’s a whole lot of real estate that Fox is losing, combined with their loss of the Champions League and Europa League to Turner. Adding WWE Smackdown (which is expected to air on Fox’s broadcast network) will be a boost overall, but it’s only two hours of content per week.

I don’t know what content Fox Sports will use to fill these newfound programming holes. They could experiment with new studio shows in the vein of First Things First and Undisputed. They could fill FS2’s airwaves with college football and college basketball instead of the UFC. Hell, they could also just air reruns of their daily shows in vacant windows, but none of those options are likely going to bring the decent (at worst) viewership that UFC content brought in.

On the bright side, if they do manage to unload their regional sports networks this year to either Disney or Comcast, filling airtime on those networks during the day won’t be their problem. It seems like Fox Sports West airs infomercials, Champions League replays, or UFC replays during the day every day.

4. Will the UFC cede control of the production to ESPN?
This is a big one – is the UFC going to let ESPN’s “people” like Brett Okamoto, Chael Sonnen, and newly-minted reporter Ariel Helwani pop up on broadcasts? Will broadcasters like Jon Anik, Joe Rogan, and Jimmy Smith still be calling fights, or are they going to be replaced with ESPN’s hand-picked choices? This was reportedly a major sticking point in the past with the UFC, which wanted to retain control.

5. Where will the UFC rank among ESPN’s properties?
This final question is a largely hypothetical one that everyone will have a different opinion on – among ESPN’s numerous partners, where does the UFC rank? At a press conference unveiling FS1 five years ago, network executives talked about the “seven pillars” the network would be built around, one of which was the UFC (another was the Champions League which, as mentioned earlier, is leaving for Turner this fall).

Will the UFC be one of ESPN’s pillars, or will it merely be another cog in the machine? Like FS1 in 2013, a large chunk of ESPN’s programming is built around college football and college basketball. ESPN also relies a great deal on MLB and the NFL (and unlike FS1, airs a weekly live game in Monday Night Football), and it also fills plenty of airtime with the NBA and less popular college sports like baseball, softball, and lacrosse. ESPN has invested ten figures in rights fees to broadcast the UFC, which seems to indicate that they view it as cornerstone programming.

And maybe ESPN is looking towards the future with this deal, given the relative uncertainty about ESPN’s Monday Night Football deal and their MLB deal that is seemingly becoming less and less of a focus for the company. Then again, MMA has been America’s Second Most Popular Sport Of The Future since 1993 (according to Dana White, at least), and it hasn’t been able to break through to the degree that many expected. Maybe moving to ESPN will be the next step necessary for the sports to progress. Or maybe it’ll continue to trudge along at its current pace, providing strong live content and viewership but not threatening the NBA, MLB, college football, or college basketball, let alone the NFL.