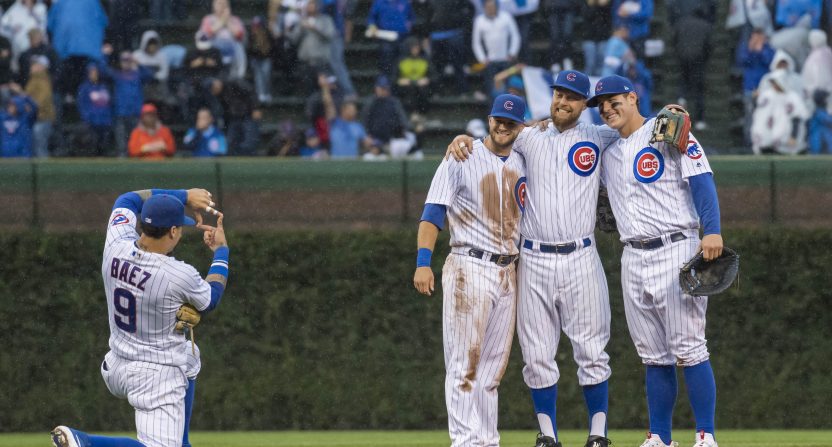 The 2018 MLB Postseason starts in earnest on Tuesday with the NL Wild Card game on ESPN, though it sort of starts on Monday with a pair of tiebreaker games in the National League.

On Monday, TBS and ESPN announced their broadcasters for the two Wild Card games, as well as the two Monday tiebreakers.

We’ll start off with Monday.

The American League playoff matchups are set as well, with the Cleveland Indians taking on the Houston Astros in one ALDS matchup and the winner of the A’s-Yankees Wild Card game taking on the Boston Red Sox in the other.

The Indians-Astros series on TBS will be called by Don Orsillo, Dennis Eckersley, and reporter Hazel Mae.

The Wild Card-Red Sox series on TBS will be called by Brian Anderson, Ron Darling, and reporter Lauren Shehadi.

Studio coverage for Turner this season will be once again provided by host Casey Stern and analysts Pedro Martinez, Jimmy Rollins, and Gary Sheffield.

Long-time Turner face Ernie Johnson will not be part of Turner’s coverage this year, and he recorded a video explaining why – he has blood clots in both of his legs and has been advised not to fly.

A message from @TurnerSportsEJ on his absence from the upcoming MLB Postseason pic.twitter.com/fIZ6NFLXdi

Joe Simpson, another long-time Turner analyst, will also not be part of the coverage. Turner is mum on why Simpson is not a part of their coverage, but even discounting the pair of controversies he was involved in this season (neither of which involved an American League team), his inclusion in Turner’s coverage always seemed like a weird fit, given that he didn’t work any regular season games for the network and always seemed like the third wheel in the broadcast booth.

As for Fox Sports, airing the NLDS, NLCS, and World Series, and MLB Network, airing a pair of NLDS games, nothing has been officially announced yet by either network. One NLDS series will be called by Joe Davis, John Smoltz, Ken Rosenthal, and Tom Verducci (as confirmed on Twitter by Davis), with Joe Buck replacing Davis for the NLCS and World Series. The other series is expected to be called by AJ Pierzynski, David Cone, and JP Morosi. You’ll notice there’s not a play by play broadcaster tied to that booth yet, because, quite frankly, we don’t know who it will be. We do know that it will not be Kenny Albert, who will be working the NFL next weekend, and that it’s not expected to be Matt Vasgersian, on MLB International duty this year. That leaves the most likely play by play announcer as Aaron Goldsmith, who has called MLB and college football this year for Fox.

MLB Network has also not confirmed their broadcasters for their two games, though it’s expected Bob Costas will be on the call for both, joined by Jim Kaat for one game and John Smoltz for the other.