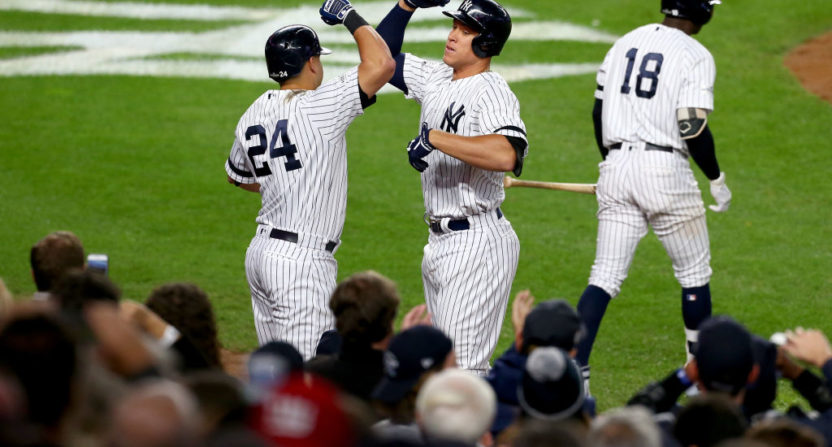 For a regional sports network built around live rights to local teams, success is often dictated largely by factors no TV executive can control. Is the team good? Are the players exciting? Has the front office cultivated trust with local fans? A beloved winning team can make a lot of suits look good, and a mediocre one can cause a lot of headaches at network offices.

So in discussing the massive ratings increase for YES Network’s Yankees coverage in 2017, we must first credit Aaron Judge, Gary Sanchez and the men in pinstripes. It was they who improved the Yankees from 84 wins to 91 and lifted the franchise to its first playoff series victory since 2012. The No. 1 reason that viewership for Yankee games on YES drew their best ratings in five years was a team full of promising young stars tearing though the American League.

But YES president Jon Litner says the network deserves some credit, too. Litner told Awful Announcing last week that the booming ratings were a product of not only the Yankees’ play but also the network’s ability to capitalize on it.

The obvious first step for YES was to resolve its dispute with Comcast, which had kept about 900,000 subscribers in Connecticut, New Jersey and Pennsylvania from watching the Yankees in 2016. By the time Litner was hired from NBC Sports last September, the dispute had dragged on longer than expected and resulted in the ultimate indignity: For the first time ever, YES Yankees telecasts had been beaten in the ratings by SNY’s Mets broadcasts. YES and Comcast finally reached an agreement in January, thanks in part to intervention from YES’ parent company, 21st Century Fox, restoring the network to most tri-state homes.

With Comcast back in the fold, YES was positioned for a hefty ratings increase. The next step was to build a promotional strategy around the strength of the Yankees organization: loads of young talent in the majors and high-minors. YES decided before the season to emphasize the Yankees’ youth as much as possible — in its marketing, its programming and its digital presence. No one expected big things from the so-called Baby Bombers in 2017, but the core of a future contender was coalescing, and fans were finding their energy.

“We really wanted to make sure the YES Network was pivoting to take advantage of this young team,” Litner said, “and to make sure what we were saying to our audience and how we were talking about the team was consistent with the direction that Yankee management was going with the team.”

In April, YES launched Homegrown: The Path to Pinstripes, a series profiling promising players at Triple-A Scranton/Wilkes-Barre. The series, says Litner, “humanized, personalized and connected these young kids to the New York audience,” which paid off when Jordan Montgomery, Clint Frazier and others were summoned from Scranton to the major league team.

.@_tylerwade has all the leather and knows how to use it.

New episode of Homegrown: The Path To Pinstripes airs Wednesday at midnight. pic.twitter.com/pfwoid4f5l

YES also began scheming to attract younger viewers. They debuted an ad campaign featuring broadcasters doing yoga. The result was goofy but also, as Litner points out, playful, fun and different. They stepped up their social media presence, broadcasting production meetings on Facebook Live and producing digital bobbleheads and Movie Poster Mondays, with an emphasis on young stars. They encouraged fans to stream games on Fox Sports Go and saw a viewership increase there, as well as a dramatic spike in video views across their social media accounts and YESNetwork.com.

One way or another, YES experienced a giant ratings boost in 2017. The network’s 3.57 average household rating for Yankees games was its best since 2012, up 57 percent from 2016 and up 29 percent from 2015, the last year Comcast had been carrying the channel. Primetime telecasts bested all broadcast and cable networks in the New York designated market area. Pre-game coverage reached a six-year high, post-game coverage reached a seven-year high, and Yankees Batting Practice Today (which kept a camera on Judge for entire shows) posted its best rating since its 2006 inception.

It is, of course, impossible to know how much of this success owed to YES’ strategy, as opposed to the return of Comcast and the Yankees’ on-field results. Most likely, the promotional campaigns and social media gimmicks helped only at the margins. But with the team expected to be at least as good in 2018 as it was in 2017, exactly where the audience came from hardly matters. YES has been the most-watched regional sports network for most of the past decade and a half, and with its ratings slump in the rear-view mirror one way or another, that status appears safe.