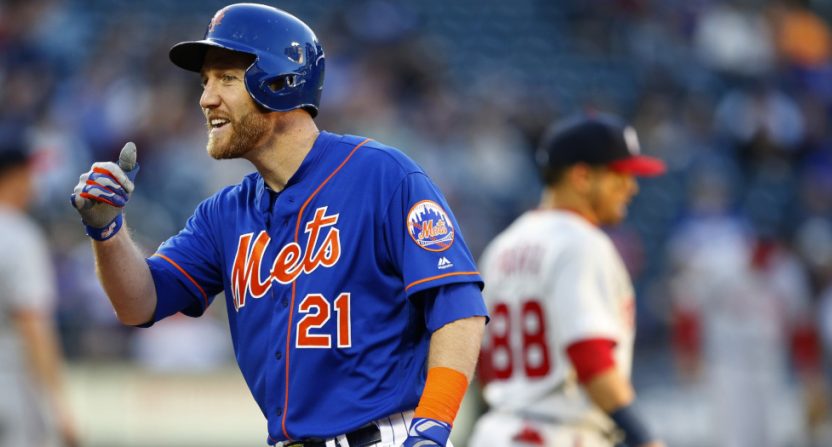 Back in February, Andrew Marchand of The New York Post wrote that Yahoo was launching a premium Mets’ app, then dubbed “The Queens Baseball Club.” The app even then was proposed as something that could be extended to other teams, with Marchand writing that it would “cover teams, while attempting to form a community, with what it says will be insider experiences for fans.” But while Yahoo hired writers (Mike Mazzeo, Wallace Matthews, Matt Ehalt, and Gerard Gilberto), the launch date of March 28 (Opening Day) came and went with no app. Now, almost two months later, Bob Raissman of The New York Daily News has a piece on why the app (now dubbed “The Flushing Meadows Baseball Club”) hasn’t launched yet. As per Raissman, the new launch date is early June (likely by June 10), and the delay is about negotiations with MLB and other clubs:

Verizon/Yahoo has signed the Mets to a three-year deal worth $3 million. If the app is not up and running by July, Verizon pays a lesser rights fee to the Mets. Though, obviously, the site is still on the hook for the writers’ full salaries, whether or not they’re put to work on a functioning app. But the immediate financial elements of the deal were not the sticking point that has delayed the launch.

That issue appears to be the “future” revenue made in the deal. The Mets acted as an independent operator in this deal, going outside the MLB umbrella. Either MLB bean counters didn’t pay attention to what the Mets were negotiating or they were blindsided.

Would anyone be surprised if MLB will now also get a piece of the action?

There are a couple of highly-unusual elements to this deal. First, this is an app that’s partly revolving around media coverage of the Mets, but it’s paying a fee to the Mets. That obviously happens with TV and radio outlets that pay for broadcast rights of the actual game, but you don’t usually see that with any other media outlet. (Except for outlets that have an actual sponsorship deal with the club in question, but those kinds of deals tend to be for advertising of some sort, and they’re usually significantly separated from the outlet’s actual journalists and coverage.)

Now, that payment can be seen as for the “insider experiences” portion of this. That’s supposed to include things like access to batting practice, press conferences and Q+As, and it should help differentiate Yahoo’s offering from the newspapers and websites covering the team. And it doesn’t necessarily mean that this will all be positive coverage, either; Raissman notes that some of the writers’ pieces initially intended for this app have been published on Yahoo’s main website, and that they’ve seemed appropriately critical when necessary. But it’s still interesting to see a media organization pay money to a team in a deal that isn’t either for broadcast rights or sponsorship.

It’s also interesting that the Mets negotiated this without MLB’s involvement, and that MLB apparently not only wasn’t happy with that, but also seemingly held up the whole thing to get other teams “involved in a similar digital platform.” There are obviously some areas where clubs surrender the ability to make particular deals to the league (national broadcast rights, for example), but it isn’t immediately apparent why this wasn’t a local deal that the Mets could do without MLB involvement, or why the Mets’ app launch was held up by MLB trying to set something up for other teams.

At any rate, this app is now launching almost three months into the season instead of on Opening Day, and a number of talented writers have been covering the team for months without their work appearing where it was initially set to go (with Raissman writing that many of their pieces were “filed into the Ozone”). That seems suboptimal, especially considering that this is only a three-year deal; it’s now a 2.75-year deal. And whatever happened here brings up thoughts of the various calamities that have befallen the Mets in recent years. Maybe the curse now extends to media deals with them too.