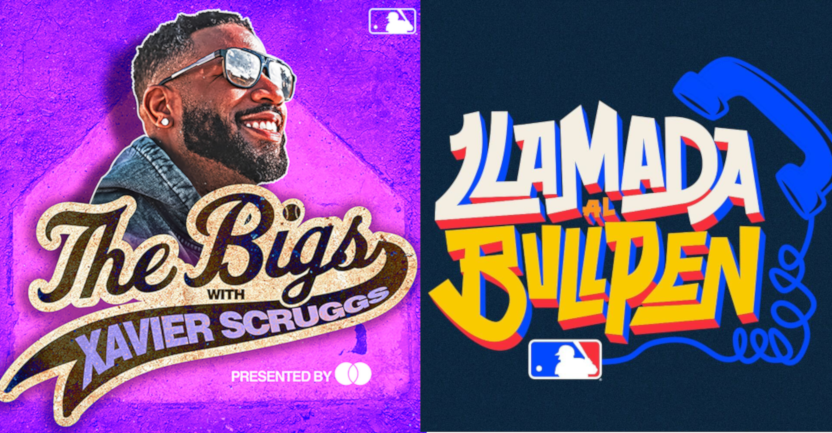 Major League Baseball has announced that they’re putting out two new podcasts, “The Bigs” and “Llamada al Bullpen.” In English-language podcast “The Bigs,” former Cardinals’ and Marlins’ player and current ESPN/Sirius XM broadcaster and Cardinals’ Diversity, Equity and Inclusion consultant Xavier Scruggs interviews current players one-on-one, talking not just about their on-field play but also about how they got there and who’s supporting them. It will premiere June 16 with an interview with Cardinals’ pitcher Jack Flaherty. In the relaunch of podcast “Llamada al Bullpen,” journalists Daniel Alfonso and Amanda Rivera interview top Latino players in Spanish and help fans get to know them beyond the field. Scruggs spoke to Awful Announcing Sunday about “The Bigs,” and said this podcast provides a great platform to elevate players’ personal stories.

“For me, as a player, I always wanted to give people a look into what goes on behind the scenes. Obviously a lot of fans and supporters of baseball know people on the field and know what they can do talent-wise, but I wanted to give people a look at what it’s like behind the scenes, what goes into everything before the game, what goes into everything after the game. And really for me, I’ve understood how my platform and influence can really affect people positively in this game of baseball.”

He said his experience as a player helps him connect with the interviewees, and helps bring out interesting angles that aren’t always discussed.

“So when me and MLB first started talking about this opportunity, I was juiced, I was excited about it because for me, I had started my own podcast and I was doing that, trying to give people an inside look into the sports industry and what it takes to be successful, all the little things that go on behind the scenes that people don’t see.”

“So for me to get the opportunity to put other people on the platform, other players, and do it from a player-to-player perspective, someone that’s been through it, I kind of had a good idea how to hit those little nuances that a lot of people don’t hear about. And I felt like I was the right person to kind of bring those to the surface. Throughout my whole time in this game, the one thing I really tried to do was develop genuine relationships, and now I have the opportunity to put those relationships on a platform and people can get a real good look into everything that’s around the game of baseball.”

In addition to his MLB career, Scruggs also played professionally in Korea and Mexico. He said that global experience is also helpful when it comes to connecting with players from different backgrounds.

“Absolutely. I think for me, my whole career, it’s been about changing perspective, seeing the game and seeing the world from a different point of view, from other people’s shoes. When you talk about the diversity initiatives that MLB has, that was a perfect opportunity for me to say ‘Hey, I’ve been through all these different opportunities, I’ve celebrated them, I’ve had great experiences, now why not bring this to the forefront with MLB and be able to show how I relate to some of these guys, not just American players but Dominican players, Asian players, Latino players?’ It doesn’t matter.”

“Being able to celebrate differences was a big initiative for MLB and myself when going about this podcast. We didn’t want it to be another podcast where you just do interviews, because that’s what we get all day, a lot of bits and pieces of interviews. For me, it was about being conversational, learning about people’s backgrounds, learning about experiences that they have been through that have affected them on and off the field and have brought them success on and off the field.”

Like many athletes, MLB players are already doing a lot of media appearances. Scruggs said he wanted to make this podcast a welcoming place for them, and one that didn’t feel like a standard media session, and he said doing this audio-only was helpful there.

“As athletes you get so bogged down with interviews and with questions all the time. For me, it was important to stress to the players, some who I had relationships with, some who I didn’t, that ‘I want you to be comfortable. I don’t want you to do this at the field in the interview room or in the Zoom room. I want you to be able to be at home, relaxed, be in your own comfort, and just have a conversation with me.’ One of the big things was we didn’t have to run it through Zoom, we didn’t have to do it with video, so these guys didn’t have to feel uncomfortable, they didn’t have to show their face. It was almost like me just calling them like ‘Hey, let’s just talk a little bit. Let’s learn about one another, let’s conversate.'”

Scruggs said while podcasting’s a crowded field, he thinks The Bigs will stand out because of its focus on players’ backgrounds, experiences, and support systems.

“For me, I feel like a lot of baseball and sports podcasts, a lot of them are either 1. informational about what’s going on on the field or 2. in kind of a joking style of ‘Let’s make fun of what happens on and off the field.’ But for me, it was more about highlighting these players’ experiences and some of the struggles and obstacles that they’ve been through and what’s brought them to where they’re at today.”

“One thing that all the players talked about was their support system. That was one area I really wanted to highlight, because a lot of times in sports, we don’t get to talk about the support system, whether it be a wife, a girlfriend, a family member. We don’t understand sometimes how much sacrifice those people put into the games. So for me, it was important to highlight those things as well and do it in a way where the player feels comfortable.”

Scruggs said one of his favorite interviews so far came with Albert Pujols, who had meant a lot to him during his playing career.

“I came up in the Cardinals’ organization, so getting to sit down with Albert Pujols, future Hall of Famer, that was like my fangirl moment. It was just me smiling, I almost couldn’t get some of the questions out, couldn’t get some of my statements out, just because I was thinking ‘Man, I’m sitting down and talking with someone that I’ve looked up to for so long, in my career, in this game of baseball, who I’m still looking up to.’ And the funny thing was, he didn’t even want to talk about himself!”

“And that’s something a lot of people know about Albert, he loves to deflect off of himself. For to me, I had to really kind of stick to my job and try and get to an inside look at Albert, get him to tell me his thoughts and feelings going into the (2011) World Series with the Cardinals, getting a free-agent deal signed with the Angels, ‘I need to know some of those thoughts that were going through your head.’ So for me, it was tough to focus, but at the same time, that was important for me, and one of those moments that just stood out.”

Scruggs said talking with the Orioles’ Trey Mancini was also remarkable, as they discussed Mancini’s 2020 colon cancer diagnosis and battle through that.

“All these interviews have been amazing, but sitting down with Trey Mancini and just hearing kind of his thought process as to what he went through last year after diagnosis, going through the cancer treatment and all of that stuff, that was an eye-opening experience for me. He was another guy who deflected; it was more important for him to make sure his family was comforted. He cared more about his family and his girlfriend Sara [Perlman] more than him going through the treatment. So for me, it was an eye-opening experience to say ‘Man, look at this guy going through something so tough, and he cares more about the people around him than himself.'”

“The Bigs” has a 10-episode season launching on June 16, with other interviewees for this season including Tim Anderson, Kolten Wong,
David Price, and Brett Phillips. And Scruggs said he thinks there are a lot more stories to tell going forward.

“We’re just touching the surface with this podcast. We’re actually getting an inside look into how players think, on and off the field, and a good thing is MLB is highlighting all of those experiences, all of those opportunities for the players to have this platform. A lot of times, players in this game feel like maybe they aren’t celebrated the way they should be in the media. From a player-to-player perspective, that’s what we wanted to do with this, we wanted to highlight all of these special moments, we wanted to give the players the ultimate platform.”

“And we wanted to be a light and a positive look on all the things these athletes go through. A lot of times it can be so stressful, training to go through a 162-game season. But if we continue to highlight the great things that these players are doing in and out of the game, and the diversity within this game, man, the sky’s the limit.”