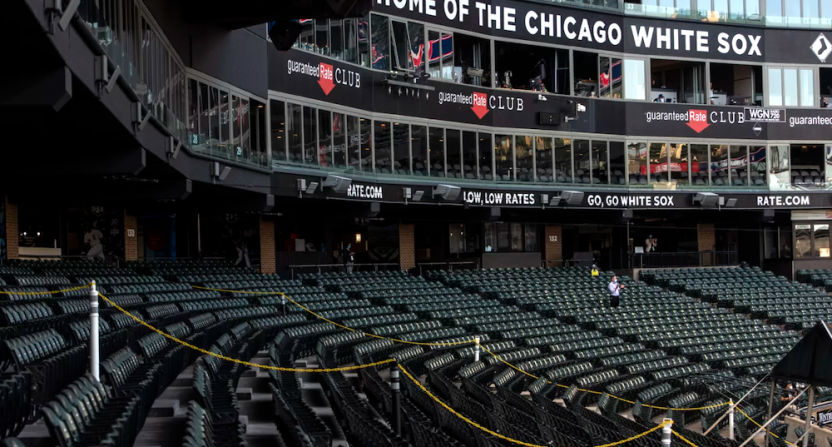 The St. Louis Cardinals returned to play an actual Major League Baseball game Saturday after having their previous 18 games postponed due to a COVID-19 outbreak among 18 players and coaches. Having played only five games thus far in 2020, the Cards resumed their season at Guaranteed Rate Field against the Chicago White Sox for a three-game set, which included a doubleheader Saturday.

However, because of the outbreak among the Cardinals and Chicago mayor Lori Lightfoot putting Missouri on a list of states from which travelers to the city must quarantine for 14 days, reporters who cover St. Louis were not allowed in the White Sox’s ballpark.

Included among that group were Cubs beat writers Paul Sullivan of the Chicago Tribune and ESPN’s Jesse Rogers, both of whom had traveled to St. Louis on Aug. 7 to cover a series with the Cardinals that was eventually postponed.

The Chicago chapter of the Baseball Writers Association of America spoke out against this on Twitter, while also criticizing MLB for not stepping to force the White Sox to change its stance.

The Cardinals will attempt to begin their star-crossed season again Saturday at White Sox Park, followed by a 5-game series at Wrigley. The Sox are not credentialing St. Louis media to chronicle this historic event. MLB will not step in. Shameful.

Yet according to St. Louis Post-Dispatch reporter Derrick Goold, MLB did attempt to intervene but the White Sox refused to budge on its policy.

Some background in the below tweet. MLB did offer considerable help; Sox still declined. So the challenge for me will be to provide coverage of the remarkable moment in #stlcards  history with the same clarity, same details, but not the same view.

Goold still filed game stories for Saturday’s doubleheader from Chicago, despite not being allowed in the ballpark. If you read the gamer, it’s an old-school recap of key events that impacted the outcome. But you might notice that Goold didn’t get any quotes from players or managers. (Presumably, he would’ve had access to Zoom interviews from the press box.)

As he wrote in a column for the Tribune, Sullivan contended that he was an “essential worker” who should be allowed access to the ballpark, as has been the case with other MLB clubs such as the New York Yankees and Cincinnati Reds.

“It should also be noted as a Tribune reporter, I’m granted ‘essential worker’ status in Illinois during the coronavirus emergency, a designation the Sox conveniently ignored.

“MLB refused to intervene on behalf of the Baseball Writers Association of America, while acknowledging another reporter from a state on the quarantine list had been credentialed by the Sox earlier. The BBWAA also was toothless, and even the president (uh, me) was of no use.”

Speaking to White Sox vice president of communications Scott Reifert, The Athletic’s Jon Greenberg learned that the Tribune, Post-Dispatch, and ESPN were allowed to send stringers or reporters who weren’t affected by the team’s policy to the ballpark to cover the game.

Ultimately, however, MLB is leaving it up to the individual teams on how to interpret and enforce COVID-19 policies regarding press access. The Reds, for example, are putting visiting reporters in an auxiliary press box. The Cubs have stationed out-of-town media at quarantine tables placed in upper-deck concourses.

For reporters covering a Cardinals team dealing with a historic circumstance — playing after more than two weeks off and facing a possible 55 games in 45 days to make up postponements — being prohibited from the ballpark was unfortunate for their readership. But as we hear constantly nowadays, these are unprecedented times and making a call that errs on the side of safety has to be considered well-intentioned.