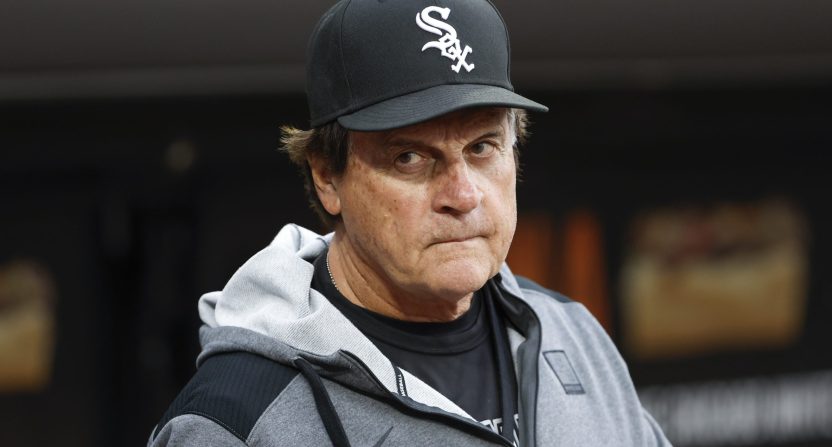 It’s truly disappointing to have to relay this news here, because there are few things more fun to speculate about than a sports-related conspiracy theory.

But, as with most conspiracy theories, the truth ends up being somewhat disappointing. If you missed it, the White Sox and Dodgers played a very eventful game last week, with a horribly blown strike call coming before Tony La Russa’s indefensible decision to intentionally walk a batter with two strikes, which led directly into a Max Muncy homer.

Viewers hoping to relive the sequence (or perhaps DVR it for posterity) noticed that on the NBC Chicago replay later that night, the relevant moments of hilarity were missing. It wasn’t too big of a stretch to assume that the White Sox had that sequence cut from the replay out of embarrassment or, perhaps, even on the orders of La Russa himself. (Though that would require Tony La Russa to be a lot more aware of, well, anything than he seems capable of at this point in time.)

Here’s what our Joe Lucia wrote then on the decision:

Viewing the replay of the game, we also confirmed that the missed call incident in the second inning was cut. However, both halves of the scoreless second also fell by the wayside, so it was less glaring.

I get it. The game yesterday went 4:13, and aired in a three-hour window on Friday. Some parts had to be cut. But the top of the sixth inning was a pivotal part of the game – the Dodgers scored four runs to put the game completely out of reach. The cut is even more glaring when you realize that the entire top of the sixth wasn’t cut – the broadcast came back for Reynaldo Lopez’s inning ending strikeout of Will Smith!

I’m not going to sit here and claim that NBC Sports Chicago was trying to protect La Russa or the team, but it sure was weird for them to cut out that significant part of the game.

Today, Sun-Times scribe Jeff Agrest reported that the decision to cut the aforementioned newsworthy moments came not from anyone affiliated with the team or NBC Chicago, but instead with the outside vendor contracted to cut games down to fit into a replay broadcast window.

Regarding NBC Sports Chicago's edited #WhiteSox replay (1/5):
The decision to remove the portion of the game in question was made by an unaffiliated person from a vendor in New Jersey. The editor wasn't aware of what happened in the inning that was cut.

Granted, NBCSCH could have told the editor not to remove that part, but it had no reason to believe such a request was necessary. The network learned something, to be sure.

Agrest noted that the network has a history of not going out of their way to protect the team (which I can anecdotally confirm, as a neutral observer having spent most of my life in the greater Chicago media market):

Bottom line: There was no conspiracy or cover-up to try to protect the #WhiteSox.

So no coverup. That’s unfortunate, as it would have been hilarious. As with most things it’s more just a simple mistake, albeit one that should have been avoided. Some of Agrest’s replies remain convinced it was a setup, but let’s be honest: people have been complaining about the editorial choices on game replays for a long time now. It was old enough to be something I remember Bill Simmons bemoaning (which means it dates back to an era in which Bill Simmons regularly wrote things and, even further, back to when I regularly read what he wrote.)

Spare a thought for the vendor editor, though. It’s not like they have the ability to spend hours going through the entirety of a game and crafting a satisfying narrative arc. Yes, there was enough action that inning to warrant its inclusion, but let’s be honest, it was also a Dodgers-White Sox weekday game in early June. The odds of anyone being rabidly interested in watching a replay for that had to be low, and it’s not like this was the only thing that editor was trying to get done that day.

Fortunately for anyone looking for other ways to bash the White Sox going forward, Tony La Russa is still the manager. You won’t be lacking in material.