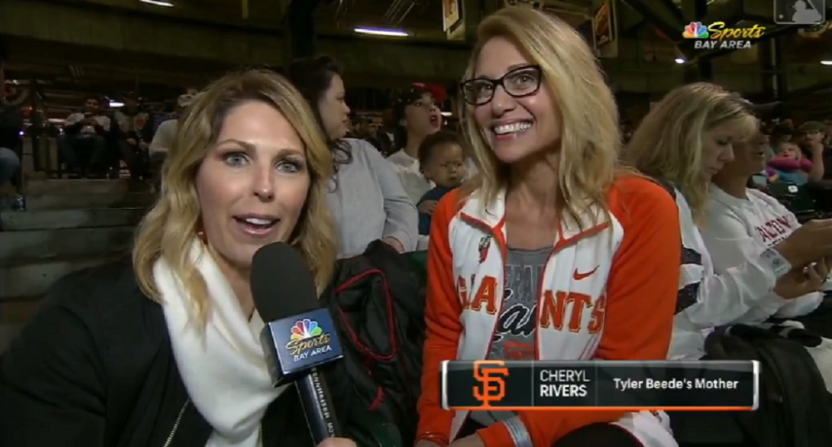 The San Francisco Giants called up pitching prospect Tyler Beede to start Tuesday night’s game against the Arizona Diamondbacks. It was the former (two–time) first-round pick’s MLB debut, so naturally his mother wanted to be in attendance at AT&T Park for the big night.

And in the bottom of the third inning, NBC Sports Bay Area’s Amy Gutierrez interviewed Beede’s mom, Cheryl Rivers. While I’ve even written on this site about how much I generally despise in-game MLB interviews, this one was awesome.

Rivers explained how she was getting ready to travel to Sacramento to watch Beede pitch in Triple-A, when he randomly called her with the news of the big-league promotion.

“He said, ‘Well, you have hotel reservations?’

He said, ‘Well, can you cancel those reservations?’

And he said, ‘Because your son just got called up to the big leagues.’

I cried, I screamed, I got covered in goosebumps. It was a feeling that I’ve never had before. Just really something special.”

Well, it only got better later in the interview. While Rivers was still talking, the PA announcer said Beede’s name as he approached the plate for his first-major league at-bat. Gutierrez pointed up at the press box acknowledging the announcement of Beede’s name, and Rivers said, “Oh, and he’s batting! Can I watch this?”

Heck yeah, you can watch your son take his first major-league at-bat.