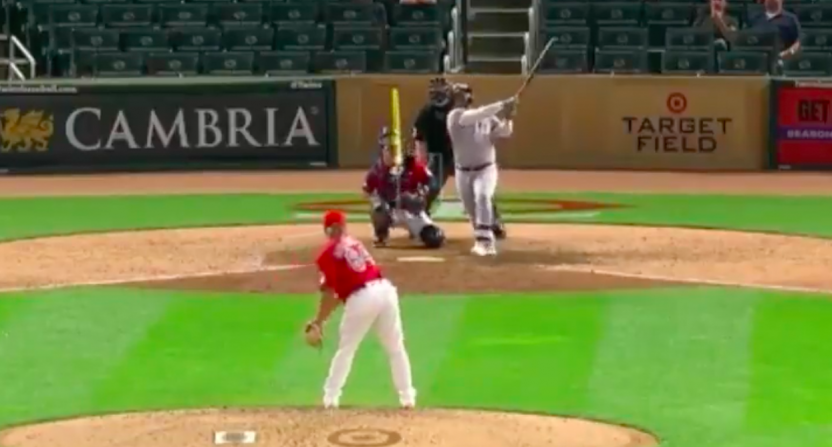 Ah, baseball’s unwritten rules. Will we ever free of your tyranny? We thought those days might be over when even Major League Baseball itself put an ad campaign together effectively rendering them moot. Three years later, however, we’re still dealing with them.

On Monday night, the Chicago White Sox did what they’ve been doing all season long…beating up the Minnesota Twins. Trailing 15-4 in the top of the 9th inning, the Twins sent catcher Willians Astudillo to the mound. Their fifth pitcher on the evening, the team clearly decided to consider this game a lost cause and go with a position player instead of wasting an inning from someone on their staff. Fair enough. With two outs, Astudillo was facing Yermin Mercedes when he got behind 3-0 on the count. Assuming that Mercedes would let the next pitch go, Astudillo effectively threw an eephus pitch, which Mercedes promptly clocked into centerfield for a solo home run.

After a little bit of bemused chuckling, the Twins broadcast went silent as Mercedes circled the bases. As he reached home plate, play-by-play announcer Dick Bremer asked the question, “Does it matter that he swung on 3 and 0?” His booth partner, Roy Smalley, responded by saying “I don’t like it….at 15-4, I don’t like it. You’re gonna get the same pitch after this.” Smalley punctuated the moment by noting the pitch was “47 miles per hour.”

Yermín Mercedes is the first #WhiteSox player to homer off a position player pitcher since Minnie Miñoso off Bobby Kline on August 27, 1955

J.C. Martin homered off Willie Smith on May 10, 1964 but Smith was a 2-way player (15 pitching appearances that season)

The unwritten rule in question here is that you should never swing at a 3 and 0 pitch, especially when the game is effectively over. But that puts the onus on Mercedes to lay down in this at-bat because the Twins have already done so. While you could make the case that the White Sox didn’t need the home run and it simply added insult to injury, the onus ultimately isn’t on them here. The Twins are the ones who quit. The Twins are the ones who sent a position player out to pitch. The Twins are the ones who put a meatball over the plate for a guy hitting .358 with six home runs in 35 games and still trying to prove himself in the big leagues.

While this metaphor might be more apt if the AL Central rival Detroit were involved, you can’t get mad at a tiger for being a tiger.

Plenty of folks on social media seemed to agree.

Just heard the Twins broadcasters ask, “is it ok to swing 3-0 vs a position player throwing 47 in a blowout?” Hell yes! Fix that pen. Stop wondering if Yermin did something wrong. You didn’t YM! pic.twitter.com/OKQAq8IMts

This is a mockery of baseball.

I mean, people are paying to watch this game and the Twins are using a position player to pitch. It’s sad https://t.co/4RYloNjaOu

Mercedes is making league minimum for the first time in his career at age 28 he should pad his stats as hard as he can not his fault the Twins wanted to forfeit https://t.co/q5emqjhopC

Pffft. Roy Smalley didn’t like it. Well, I don’t like position players getting cute on the mound in big league ballgames. Wear it. https://t.co/LmJWzaueiy

A good way for the Minnesota Twins and their broadcasters to avoid this situation in the future is to not let the White Sox score 15 runs. Another way would be to not put position players in as pitchers. These are merely suggestions but hopefully, they will help you to avoid any further problems with baseball’s unwritten rules.

And hey, to be fair, it’s not like Astudillo was that bad, all things considered.

Willians Astudillo has a 4.50 ERA, which is as good or better than 12 of the 19 actual pitchers who've appeared in a game for the #MNTwins this season.