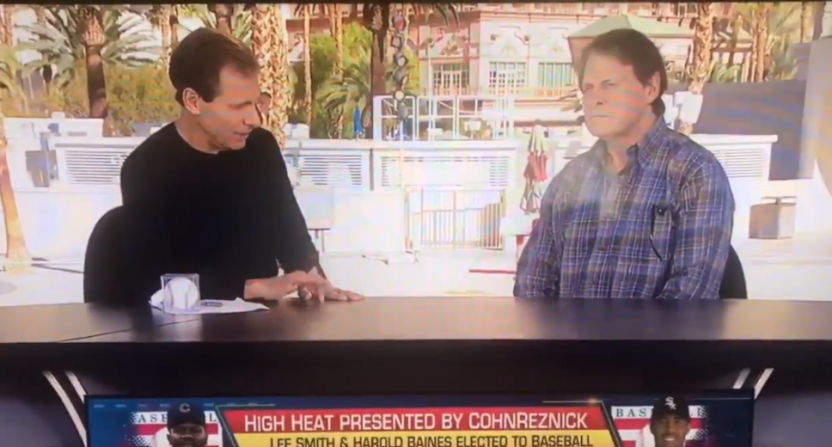 The selection of Harold Baines to the Baseball Hall of Fame by the Today’s Game Committee has sparked a whole lot of criticism, including many pointing out the realms of players with better stats. But three of that committee’s 16 members have significant connections to Baines; Chicago White Sox owner Jerry Reinsdorf (Baines played there from 1980-89 and again in a couple of later stints), long-time general manager Pat Gillick (who traded for Baines while with the Baltimore Orioles in 1997), and long-time manager Tony La Russa (who managed Baines with both the White Sox and the Oakland Athletics).

Behold Tony La Russa beclowning himself by going on MLB Network and saying that the arguments against Harold Baines being in the Hall of Fame are “weak-ass superficial bullshit.” I would gladly have that confrontation/debate with someone whose best argument is game-winning RBIs. pic.twitter.com/Wa2hRzdxhE

Russo: “You put in the Hall of Fame someone everyone in America thinks is not a Hall of Famer, that’s going to make people think, yeah, there’s a lot of, Tony, Tony, trust me, I deal with them all the time. Most people think this is a thing…”

La Russa: “You know what, I would love to get into a confrontation/debate where we pull out the stuff that we looked at and you tell me that weak-ass superficial bullshit that you looked at, and I guarantee you…”

La Russa: “Well, Steve Garvey should be there too then. Harold Baines is a Hall of Famer. It’s a shame that now he’s being looked at as not great.”

La Russa: “Because longevity, excellence over time…in the 80s and 90s, almost every one of the offensive stats that people trust, he was in the top four or five. For 20 years. He drove in 100 runs late in his career, he drove them in early, game-winning RBIs, he’s up there with the best of them. He had a very distinguished career.”

Game-winning RBIs, eh? Let’s explore just how good and common of a stat that is. From Baseball Reference:

The Game-winning run batted in, also known as the game-winning RBI and abbreviated GWRBI, was an official baseball statistic from 1981 to 1989. The GWRBI was awarded to the player credited with an RBIon the difference-making run in a game; this is the run which gives a team the lead in a game which it never relinquishes afterwards.

The idea behind the statistic was to recognize players who were good clutch hitters and who would perform particularly well when the game as on the line. In effect, however, the statistic demonstrated that the GWRBI was quite random, and that there were no players who were singularly adept at driving in the particular – and rather arbitrary – run singled out by the statistic. The GWRBI was thus a unique feature of baseball in the 1980s and was quietly discontinued at the end of the decade, with Keith Hernandez and Eddie Murray as the leading compilers in each league.

A statistic only used in the 80s that MLB itself went away from. That’s a real good way to make your case, Tony, especially when you’re calling the many good arguments against Baines’ induction “weak-ass superficial bullshit.” But sure, let’s see this debate. If this segment’s anything to go on, La Russa doesn’t exactly have a great case to make for Baines.