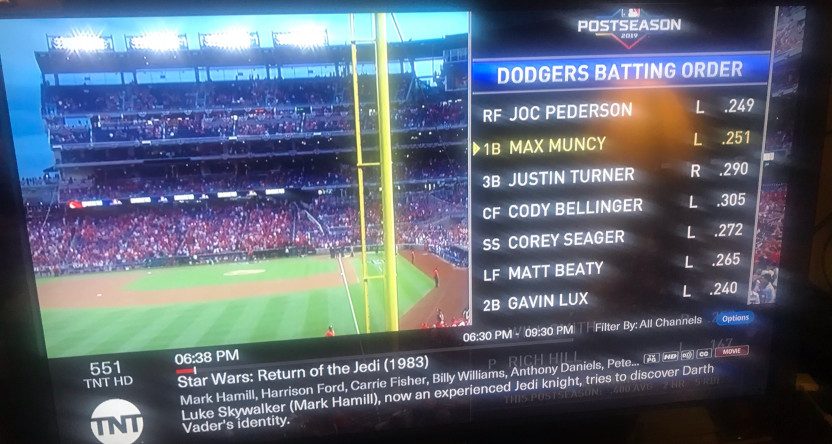 Sports events sometimes run longer than scheduled or wind up on alternate channels, and that can lead to some funny complaints from viewers expecting to see something else. We’ve seen this before with things like college basketball running into golf or college football games being sent to Fox Business Network, but a particularly humorous one happened Monday with TNT. Turner’s plan was to show both National League Division Series games back to back on TBS, with Braves-Cardinals starting at 3 p.m. ET and Dodgers-Nationals beginning at 6:40 p.m. ET. However, Braves-Cardinals ran long, with the Cardinals eventually winning 5-4 in the 10th inning at around 7:15 p.m. Eastern.

You’d think that wouldn’t be a huge problem, as Turner has another high-distribution channel in TNT, and they were able to start Dodgers-Nationals there (including the pre-game show). But that led to a lot of complaints from those who were expecting to watch other programming on TNT at that point; a marathon of the original Star Wars trilogy, including 1977’s A New Hope (on the West Coast feed) and 1983’s Return of the Jedi (on the East Coast Feed). Here are some of those complaints:

Was enjoying my afternoon, watching Star Wars and a fucking baseball game interrupts for its seasonal bullshit. How many sports channels are there that you have to interrupt normal channels?

Fuck you, @MLB and @tntdrama.

Whyyyyy would you completely preempt a Star Wars marathon for baseball, @tntdrama? Why even schedule a movie if you’re not going to show the whole thing? Grumble.

Guess I’m not watching the last 15 minutes of #StarWars A New Hope since @tntdrama decided to replace it with a baseball game.

So @tntdrama has decided to deliberately interrupt their regular programming – in this case, THE LAST FIFTEEN MINUTES OF THE ORIGINAL #STARWARS – with a baseball game PREGAME SHOW. Extremely bad form, TNT.

@tntdrama how long is MLB gonna be on? tryna watch the rest of star wars a new hope. makin it sound like it was gonna be some highlights 'we'll return to regularly scheduled showing after this' then make it out like you forgot star wars was even on. wtf?

Thanks @tntdrama for interrupting Star Wars: ROTJ for stupid baseball. If people wanted to watch baseball, they could literally flip to TBS.

But this then escalated further, with people then tweeting “spoilers” (for A New Hope and Return of the Jedi, movies that are 42 and 36 years old respectively) at those complaining:

The Second Death Star gets blown up. There.

And the circle of complaining really became complete with this person who was upset that the Star Wars marathon interrupted their Supernatural reruns:

@tntdrama I only got 3 hours of #Supernatural instead of 4 hours because of a Star Wars Marathon?! #TNTRewatch #SPNFamily

So whatever you show, someone will be mad at you. But we’re going to venture that the audience for live postseason baseball is somewhat higher than for reruns of a 36-year-old movie, so this was probably a smart overall move by Turner.

With Braves-Cardinals now over, Dodgers-Nationals is now airing on TBS, and Return of the Jedi is airing on TNT’s East Coast feed. A New Hope has wrapped up on the West Coast feed, which is now airing The Empire Strikes Back. This concludes your regular programming update on basic cable airings of four-decade-old movies.

[Photo from Dave McGrath on Twitter; hat tip to Joe Wright for finding this]

UFC 246 is in Las Vegas on Saturday night, with Conor McGregor and Donald “Cowboy” Cerrone set for...

It's not yet March, despite what this moment and Jon Rothstein's tweets may tell you.

So that could have gone better, Tom.

Brady confirmed to The Daily Beast that he has had talks with G/O Media, but added "Not really seeking an industry job at the moment; my focus is on continuing to build my consulting business."

UFC 246 is in Las Vegas on Saturday night, with Conor McGregor and Donald “Cowboy” Cerrone set for...

It's not yet March, despite what this moment and Jon Rothstein's tweets may tell you.

So that could have gone better, Tom.

Brady confirmed to The Daily Beast that he has had talks with G/O Media, but added "Not really seeking an industry job at the moment; my focus is on continuing to build my consulting business."