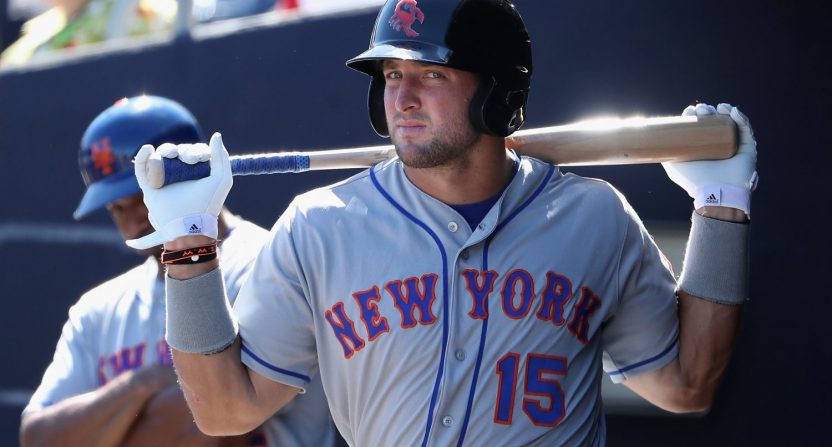 As it stands, Tim Tebow is a very bad professional baseball player. He’s hitting .218 in 55 at-bats for the low-Single-A Columbia Fireflies, who are affiliated with the New York Mets.

That’s not exactly the kind of batting average that’s going to help you advance up the ranks of the minor leagues.

But even if Tebow isn’t helping the Fireflies win, he is, to this point, helping the team’s bottom line.

According to the Post & Courier, Tebow is helping the team boost its attendance to the tune of 2,000 fans per game so far, not to mention the additional merchandise he’s helping to sell.

“Even though we know Tim Tebow’s college record and what he did to the Gamecocks when he came to Williams-Brice, there’s not this, ‘I’m not going to see Tim Tebow play because I hate Tim Tebow.’ It’s nothing that’s stopping people from coming out to see him play,” said Fireflies President John Katz. “I think, overwhelmingly, people want to see him succeed.”

That appears to be the case in Columbia, which entering this week led the SAL in average attendance at 5,787 per game — 2,000 a night more than last year, the Fireflies’ inaugural season. That appears the case on the road, where Tebow has played before sellout crowds in cities like Augusta and Rome, Ga.

It’s apparent in the fans who’ve turned out in Florida, Broncos or even Jets jerseys and crowd for one of the hundreds of autographs he signs each week.

Minor League Baseball players tend to be pretty interchangeable to fans, and attendance boosts are most common when a Major League player is on a rehab assignment, or a team drafts a big name (I can’t tell you how many Quad City River Bandits games I went to as a kid to watch Joe Mauer). Tebow is a unique player who has helped the Firelies draw big crowds each night, even though he isn’t a great player.

With 70 home games total this season, there’s a chance the attendance could slip, as fans might get Tebow fatigue. As of now, fans have only had a few opportunities to see him. However, for now, Tebow is inarguably having an effect on attendance throughout the South Atlantic League, meaning all of those clubs are certainly rooting for him to do well.