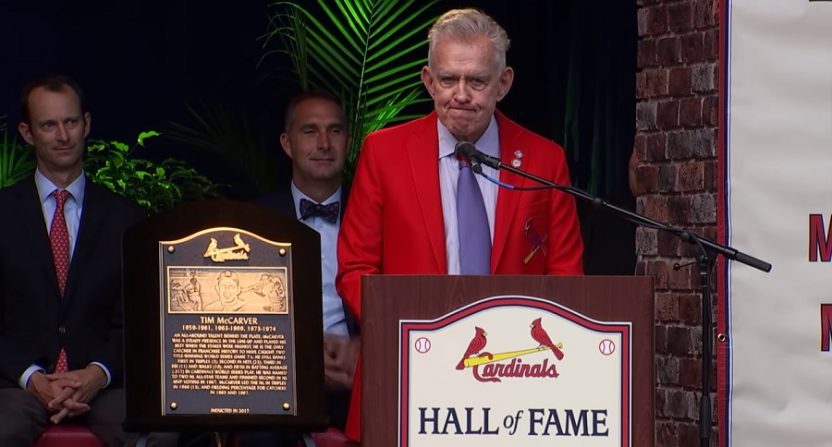 When Tim McCarver left Fox Sports after the 2013 World Series, he didn’t leave the broadcasting world. Instead, he went back to the local level, and became a part-time analysts for Cardinals broadcasts on Fox Sports Midwest (and later, Bally Sports Midwest).

But in recent years, McCarver’s future as a broadcaster has been in doubt. At the end of 2018, he expressed indecision about returning to the booth for the 2019 season. McCarver opted out of the 2020 season following advice from his doctor, and didn’t return in 2021 as the pandemic continued.

McCarver won’t be returning in 2022, and he’s calling it a wrap on his broadcasting career, per Dan Caesar of the St. Louis Post-Dispatch.

It’s now official. One of the legendary careers in baseball broadcasting — all of sportscasting, for that matter — has ended. Tim McCarver, who was the television analyst for more World Series than anyone — 24 — and a fixture on the air for decades, is retired from the business.

The acknowledgement by McCarver, who spent the final six years of his unparalleled run in the booth covering the Cardinals for what now is Bally Sports Midwest, comes three seasons after he called his last game. In the interim, he had been in limbo during the height of the coronavirus pandemic.

“I think I’m happy about it,” he said of putting down the microphone. “I think that’s the best.”

It’s a shame that McCarver didn’t get a chance to say goodbye to Cardinals fans on the air, but maybe that will be rectified at some point during the 2022 season.

The Cardinals will also be paring down their broadcast booth a bit this season. Dan McLaughlin returns as the team’s play by play broadcaster, with Jim Edmonds and Brad Thompson rotating as analysts. Rick Ankiel, Ricky Horton, and Al Hrabosky were all in the analyst rotation last season, and will be in different roles this year. Horton will move to radio, replacing the retired Mike Shannon, in addition to pregame and postgame studio work. Ankiel and Hrabosky will both have roles in pregame and postgame shows.