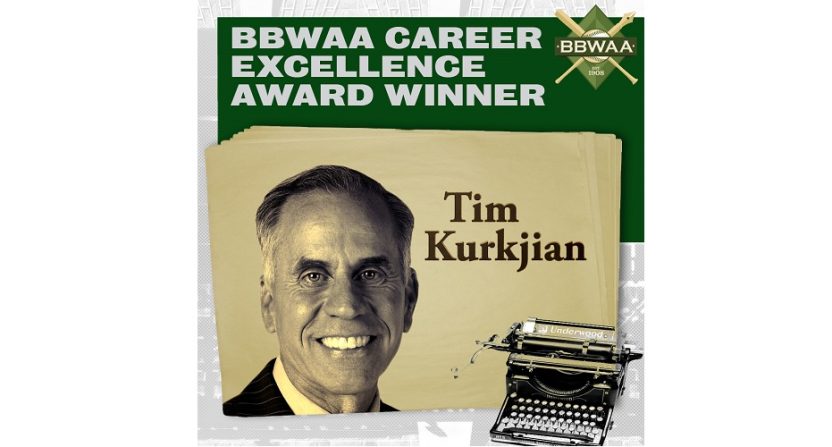 Tim Kurkjian is the 2022 winner of the BBWAA Career Excellence Award, per an announcement.

Kurkjian, a long-time ESPN columnist and on-air personality, received votes on 211 of the 375 cast for this year’s award. The runner-up was Marty Noble with 89 votes, followed by Allan Simpson with 71. Recent winners of the award include Kurkjian’s long-time ESPN colleague Jayson Stark (the 2019 honoree), Nick Cafardo (posthumously honored with the 2020 award), and Dick Kaegel (last year’s winner).

Prior to this year, the Career Excellence Award was known as the JG Taylor Spink Award. However, in February, the BBWAA voted to remove Spink’s name from the award, with 325 votes in favor and just nine opposed. The name change was spurred on by Spink’s history of racist and anti-integration writing in the Sporting News.

Kurkjian’s colleagues poured out their congratulations.

Congratulations to my friend Tim Kurkjian!

So happy for my friend. He's so good at what he does, so kind to everyone, especially me for being so insufferable at the end of interviews.

(Now, please hear this in a heavy Baltimore accent)

He's gonna get a TROPHY. https://t.co/vXEARxBhVV

As wonderful a person as @Kurkjian_ESPN seems on TV, he's even better in real life.

As much as he seems to know about baseball, he's even more encyclopedic.

The best guy. The best ballwriter. Just the best, period.

We all should chug a Diet Mountain Dew in honor of the legend. https://t.co/t5rH3tdHU3

It couldn’t have happened to a nicer guy. Literally – there is no nicer guy in baseball than Tim. https://t.co/yT9K80vBrc

Couldn’t be happier. The Baltimore chapter of the BBWAA has been pushing for this for years. And it has happened. Nobody is more deserving than @Kurkjian_ESPN And congrats to @masnRoch @Ken_Rosenthal @MarkZuckerman and others for their work in helping Tim receive this honor. https://t.co/UjqFWy8Avk

Ken Rosenthal, Kurkjian’s former colleague on the Baltimore Orioles beat, wrote a stirring tribute to him on The Athletic. Here are a couple of notable passages.

Competition on a beat can spark jealousy, friction, even outright bitterness. But with Tim, I never felt any of that. Truth be told, I worshipped him. And all these years later, I am welling up with the announcement that Tim is this year’s winner of the Career Excellence Award from the Baseball Writers Association of America. The honor, quite frankly, is overdue.

Tim’s love for the game defines his career and his hundreds of relationships in the industry. His enthusiasm is so infectious, he converts non-fans into casual fans and casual fans into devoted fans, literally drawing people into the sport. Not many of us can say that. And an even smaller number commands as much respect from people in the game. Tim has one agenda: To tell stories. Few have told them better, or taught his audience more.

And just for the hell of it, here’s a video of Scott Van Pelt driving Kurkjian into hysterics during an interview with his Baltimore accent.