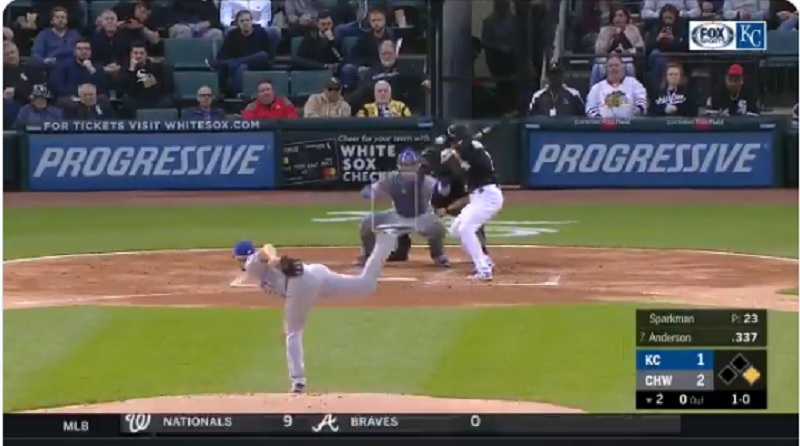 .Last month, White Sox shortstop Tim Anderson celebrated a home run against the Royals with an emphatic bat flip, and the Royals proceeded to throw at him the next time he came to the plate. Kansas City starter Brad Keller and Anderson were both ejected, with Keller earning a five game suspension for the bean ball and Anderson getting a one game ban for “language used” after he was thrown at. The incident didn’t have much of an effect on Anderson – a week and a half later, he hit a walk off homer against the Tigers and unleashed another glorious bat flip. The Tigers did not throw at Anderson in their next game, probably because they’re adults.

Thanks for the reminder that this pitch was 86 mph. I didn’t get it the first couple of times you mentioned it.

Here’s the thing – Sparkman isn’t a particularly good pitcher. He has a 4.21 ERA this season. This game against the White Sox was just the second one he’s started all season, and he’s mostly worked out of the bullpen. But the Royals don’t exactly have much starting pitching depth – their only starter with an ERA under 4.00 is Danny Duffy, who missed the first month of the season and has qualified for just one ERA title since his MLB debut in 2011.

Post-game, Anderson admitted he didn’t like the Royals and said there would be “forever beef” with the team.

"Gonna be forever beef" -Tim Anderson on the Royals ? pic.twitter.com/MnQwsBJKIp

Royals manager Ned Yost said a bunch of words that make sense if you saw this incident with zero knowledge of what happened last month.

“Coming into this series, we had no animosity toward that young man,” Royals manager Ned Yost said of Anderson. “None. And to think that we’re gonna hit him on purpose is ludicrous, one, and two, it was a changeup.

“It was forgotten. He had done his part, we had done our part. It was over.”

Yost apparently forgot that the Royals hit Anderson on purpose a month ago, but whatever floats your boat.

“We were aware of a previous situation between the two clubs involving Tim Anderson,” he said. “When the pitcher threw the ball up and in and hit him in the head, that raises an awareness to us and we have to make a decision on what we want to do to handle that situation.”

There were no further incidents over the rest of the night, but Anderson hit a go-ahead double for the White Sox in the bottom of the eighth.

I think it’s pretty ridiculous that the Royals broadcasters felt the need to beat home the “IT WAS A CHANGEUP!!!!!” narrative without realizing how shitty it looked. The first time Anderson faces the Royals since last month…he gets clipped in the bill of the helmet? Sure, maybe it’s a coincidence! But Sparkman’s first pitch to Anderson was a fastball, and it was also inside. If you pitch inside and your control sucks, you’re opening yourself up to criticism – especially if the guy you’re throwing inside to had a very public issue with your team the last time you played. And when your pitches start veering towards a player’s head, you’re really pretty terrible at what you do.