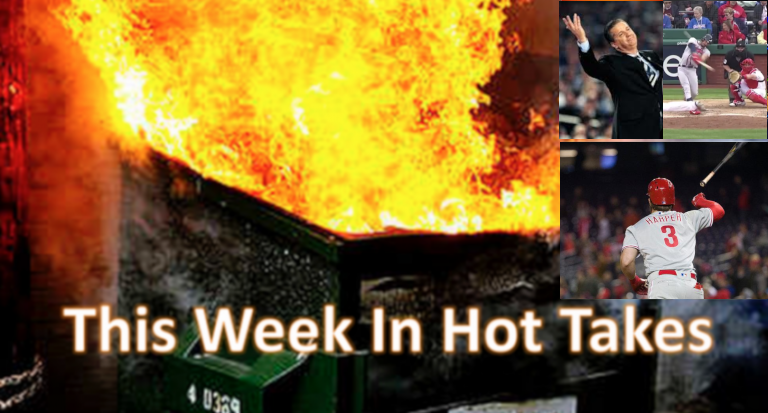 Welcome to another edition of This Week In Hot Takes. This time, we’re looking at the hottest takes from March 29 to April 4.

After Duke’s one-point loss to Michigan State in the Elite 8, plenty of takes have been flying about the Blue Devils, Zion Williamson, and more. But a real bold one came from FS1’s Skip Bayless, who argued that Duke head coach Mike Krzyzewski isn’t “a real offensive coach,” and that Williamson will need someone like that in the NBA (starting around 1:36 here):

"If [Zion Williamson] gets with a real offensive coach, watch what starts to happen. Don't start ripping him like he doesn't know how to play. His coach doesn't know how to coach him on offense. Put him in a real NBA offense where they can't play zone defense." — @RealSkipBayless pic.twitter.com/mpDVOsv96Q

“If he gets with a real coach, a NBA coach, who can put him in an offense that’s designed to bring the defense to him and let him dish to offensive shooters. …Alvin [Gentry, the New Orleans Pelicans’ head coach] would be fine. Anybody besides Coach K!” Shannon Sharpe interjects with a “Don’t do that, Skip!” and Bayless continues with “Seriously, what Gilbert [Arenas, the former NBA player whose criticisms of Williamson started this] is talking about, does he know how to come down inbounds? He just doesn’t because he wasn’t TAUGHT! That’s highly teachable at the next level!” This then goes to the part quoted in the tweet above.

On one level, there’s the semblance of a point here; different coaches favor different offensive schemes, and many of those work better for some players and not for others. Williamson is also 18, and it wouldn’t be all that surprising if he continues to learn and develop under whoever his next coach is, in conjunction with whichever assistants wind up focusing on him. And maybe Krzyzewski isn’t the world’s greatest Xs and Os coach, and maybe the offensive styles he likes to run weren’t perfect for Williamson (although Williamson’s averages of 22.6 points and 8.9 rebounds per game this year suggest he did pretty well in Krzyzewski’s systems). But it’s the “real coach” here that’s particularly ridiculous; Krzyzewski has five NCAA titles and a 1,132–344 record as a college head coach (1,059–285 at Duke), plus three Olympic gold medals as the head coach of the U.S. team, and he’s in both the Basketball Hall of Fame (inducted in 2001) and the College Basketball Hall of Fame (inducted in 2006). Suggesting he’s not a “real coach” is pretty silly.

4. Pete Thamel calls John Calipari “college athletics’ most overt mercenary,” says he “shamelessly used UCLA to the point of embarrassment again”: Another take on a college basketball coach that winds up here for its hyperbole comes from Yahoo’s Pete Thamel. After reported interest from UCLA, Kentucky head coach John Calipari instead signed a “lifetime” extension to stay with the Wildcats (a 10-year term as coach, plus a promised job as a school ambassador afterwards). And some wondered if the UCLA reports were encouraged by Calipari’s camp to try and get even more money out of Kentucky, which is a fair question to ask. But Thamel took it to a new level of vitriol in a “UCLA’s latest Final Four appearance comes as a punchline” column:

Even worse, Kentucky coach John Calipari shamelessly used UCLA to the point of embarrassment again on Monday, taking the school’s interest and reported contract offer and flipping it into a so-called ‘lifetime’ contract. Calipari’s bruised ego was needing a boost after again losing in the NCAA tournament to a team with inferior talent, so he exploited and re-exploited UCLA’s interest as a double-shot of leverage to fuel both his self-worth and bank account. Wooden had the Pyramid of Success. Calipari now can afford to build a pyramid.

In a hat tip to his narcissism, Calipari forced Big Blue Nation to bow at his feet – apparently forever – as he again squeezed its bank account. A good Final Four bar debate: Who looks worse? Calipari for blatantly using UCLA and perpetuating his reputation as college athletics’ most overt mercenary? Or UCLA for being unsophisticated enough to wait all this time for an inevitable outcome only it couldn’t see?

It leaves UCLA athletic director Dan Guerrero doing the administrative walk of shame this morning, with über-booster Casey Wasserman and Warriors general manager Bob Myers, a consultant to the search, flanking him as the wingmen.

The hyperbole there feels like a bit much. There doesn’t seem to be anything to indicate that Calipari started the talks with UCLA, or that their pursuit of him wasn’t real; as he said on his coach’s show after signing this extension, “It has nothing to do with the other stuff…people call every year. They presented it to me and I appreciate it.” And it does seem likely that people do call Calipari regularly to offer him new jobs, and if that motivates his current school to try harder to keep him, that’s understandable. There isn’t much proving Calipari “exploited and re-exploited UCLA’s interest” or “shamelessly used UCLA to the point of embarrassment”; they chased him and made an offer and Kentucky made him a better offer to stay. And that’s before we get to a poorly-chosen “administrative walk of shame” metaphor.

Criticizing Calipari’s recent results at Kentucky is one thing, and it’s also fair game to wonder if the new contract the Wildcats offered him was really necessary at this point; he was already pretty well set up there with a contract running through 2024, and it’s unclear that UCLA or anyone else would actually have made him a better offer. In fact, Seth Davis of The Athletic reported that UCLA offered Calipari $48 million over six years, which is a nice $8 million per year payday, but below the $9.2 million (making him the highest-paid basketball coach in the country) he currently gets from Kentucky. But blaming him for listening to an offer from UCLA feels a bit excessive, especially in these terms of “shamelessly used” and “forced Big Blue Nation to bow at his feet.”

3. Mike Schmidt says “home runs kill rallies”: By definition, a home run is the best possible outcome of any at-bat; any other hit doesn’t score the batter. But that hasn’t stopped a whole lot of people over the years from claiming “home runs kill rallies,” from Orel Hershiser in 2006 to Cecil Cooper in 2008. And now, let’s bring in former Phillies’ star and current broadcaster Mike Schmidt:

Joe Posnanski refuted this line of thought very effectively in 2017, also in response to Schmidt:

Home runs do not kill rallies. There is absolutely no evidence whatsoever, none, that suggests they do kill rallies, and there is detailed and more or less irrefutable mathematical evidence that says they don’t.

…The other day, Mike Schmidt — not for the first time and I’m guessing not for the last — made the suggest that home runs kill rallies. It’s a funny point for Mike Schmidt to make considering that he’s in the Hall of Fame in part because he led the league in home runs eight times and hit 548 in his career.

…Home runs do not kill rallies. We know this because people count stuff in baseball. Tom Tango offers the data:

— This year, with zero outs and nobody on you expect teams to score .552 runs.

After a solo home run with nobody out, teams score .553 runs the rest of the inning.

— With one out and nobody on, you expect teams to score .309 runs the rest of the inning.

After a solo home run with one out, teams score .301 runs the rest of the inning.

— With two outs and nobody on, you expect teams to score .103 runs the rest of the inning.

After a solo home run with two outs, teams score .133 runs the rest of the inning.

Same … same. Home runs do not kill rallies. They do nothing to rallies. They just put runs on the board. That’s all. A hitters job is to help his team score the most runs, and the best way he can do this is by hitting a home run. Then the next guy comes up. That home run neither helps nor hurts the batters coming up.

But Schmidt is still spouting this line, and that’s quite a hot take.

2. Jeff Schultz tweets “Analytics: Braves win” after Matt Joyce outperforms Bryce Harper on Opening Day: Speaking of bad baseball takes, here’s one from Jeff Schultz of The Athletic, who apparently isn’t too concerned about takes based on small sample sizes:

So far this season, Harper is now hitting .500/.652/1.188, with a staggering OPS of 1.840. Joyce is hitting .250/.250/1.000 (with the high slugging percentage coming thanks to that one home run, his only hit of the season in four plate appearances so far). And both of those are small sample sizes too, to be sure, but it seems pretty likely that Harper is going to outperform Joyce this year. “Analytics: Braves win” indeed.

1. Jonathan Allen says Bryce Harper’s “grotesque behavior on the field was worse than what goes on in the Capitol”: Speaking of Harper, a whole lot of Nationals’ fans and pundits got very, very mad in Harper’s return to D.C., especially after he answered the boos with a massive home run and bat flip. NBC News digital political reporter Jonathan Allen decided to not only call Harper’s previous play for the Nationals “grotesque,” but to say it’s worse than anything that goes on in politics:

Reminder: Harper hit .211 in 19 post-season games, striking out 23 times in 76 at-bats and compiling an .801 OPS. He was often on the DL, from which he tweet-praised a pitcher who was no-hitting Nats. His grotesque behavior on the field was worse than what goes on in the Capitol. https://t.co/psxyzFjX6W