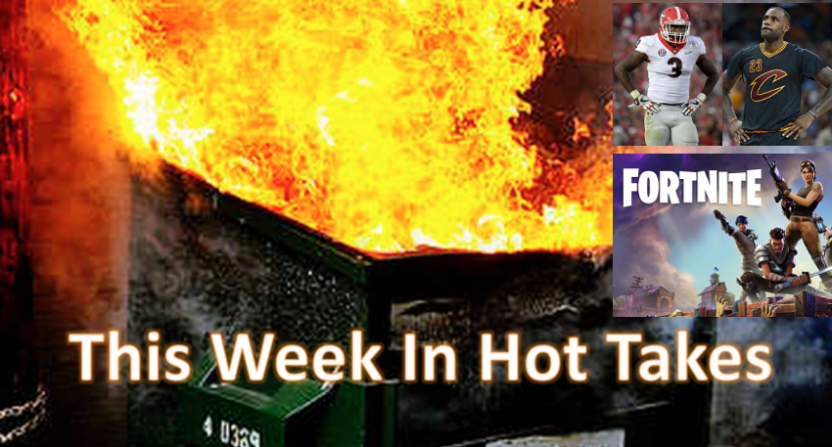 Welcome to another edition of This Week In Hot Takes, this time covering the hottest sports media takes from May 4-10.

5. Ron Cook says Penguins “will take this loss to their graves”: That particular line is quoting famed USA Hockey head coach Herb Brooks, but this is still an incredible piece from Pittsburgh Post-Gazette columnist Cook. For one thing, that Brooks speech was ahead of the third period of the 1980 gold-medal game against Finland, with the U.S. down 2-1, and it was a lot more appropriate in those circumstances; it was a motivational ploy, but also a true statement, in that the previous “Miracle On Ice” semifinal win over the USSR would be far less remembered if the team didn’t go on to win gold. (They did, eventually winning 4-2.) Meanwhile, Cook is using this not as motivation to players, but as a commentary on a NHL team’s second-round playoff loss. Some highlights:

This was Brooks, short, sweet and at his inspirational best, after his 1980 U.S. hockey team trailed Finland, 2-1, after two periods of the Lake Placid Olympics gold-medal game, a time when a loss would have made just about everybody forget their surreal win against the powerful Soviet Union team only hours earlier:

I’m thinking the Penguins will take this 2-1, Game 6 overtime loss to the Washington Capitals to their graves.

These Penguins blew their chance.

It’s a bold claim to declare that there’s “no dynasty” from a team that’s won consecutive Stanley Cups because they lost a second-round series. News flash: teams don’t always win the ultimate prize every year. This loss will certainly sting for the Penguins, but the “they’ll take it to their graves” is some remarkable hyperbole.

4. Stephen Jackson calls Rodney Hood a “garbage player”: Sneaking in under the wire, here’s some fire from Jackson, and in an unusual location: ESPN’s Get Up. Jackson often appears on L.A.-based studio shows for both ESPN and FS1 (which is pretty curious in its own right, as there aren’t many analysts who show up on both networks with any regularity), and even has a bio as an ESPN “NBA analyst” (although he seems to be more prominent on Fox these days). On Friday, though, he wound up in New York for an appearance on…Mike and Mike?

God grant me safe travels to NY. @MikeAndMike in the am. Love to… https://t.co/HhGDtZkrd9

That really would be something if Jackson found a way to appear on a show that hasn’t existed since November. But no, he meant Get Up, hosted by half of those Mikes. And that’s not the worst mistake he could make; our Alex Putterman noted that at least it’s not a tweet combining ESPN and Fox shows, such as “First Take For Yourself.” Anyway, it’s what Jackson actually said that’s more important here, and he absolutely unloaded on the Cleveland Cavaliers’ Rodney Hood after Hood declined to check into the late stages of a Game 4 blowout against the Toronto Raptors with the Cavs up by 30 (Hood later apologized, and the team laughed it off). Jackson decided to drop “garbage player” on Hood:

Here’s a partial transcription, via Jordan Heck of The Sporting News:

“He was over there pouting because he wasn’t playing well, he wasn’t getting the minutes he thought he deserved. But hey, when you don’t play well, you sit on the bench. It was garbage minutes, he probably thinks he shouldn’t have to play garbage minutes. But Rodney Hood, you are a garbage player on that team right now. You at the end of the bench because you’re not playing well.

“You can’t do that period, regardless of who you are. Rodney Hood, you haven’t done enough in the league to do that. Go in the game and do what you’re supposed to do.”

While it’s somewhat understandable how Jackson got there, making the transition from the garbage minutes, calling someone a “garbage player” (over a mistake that he’s apologized for, that had no on-court consequences, and that his teammates laughed off) is still a reasonably fiery take, especially by Get Up‘s standards. Maybe Jackson thought he was over on Undisputed?

3. Steve Rosenbloom wonders if draft pick Roquan Smith having his playbook stolen is “the earliest the Bears have been embarrassed over their choice in the first round”? Rosenbloom, of The Chicago Tribune, decided to indict the Bears’ first-round draft pick, former Georgia linebacker Roquan Smith, for the heinous off-field behavior of…having a playbook stolen, going after him hard in a column titled “We could be looking at a new era of new embarrassments from Bears draft picks.” Rosenbloom started by questioning why Smith owned a BMW (ignoring that he got it from an endorsement deal around the draft), and it escalated from there:

At this point, you could ask how a student-athlete that the NCAA is so proud of not paying is able to afford a 2018 Beemer. But that’s not why you called.

…Or, it’s possible we’re looking at a new and exciting turn in pratfalls for Bears draft picks because it doesn’t sound as if Smith, the man the team and player himself describe as a leader, did everything right.

Like, making sure the car with the team-issued iPad and all those valuables was actually locked.

…Smith told police he believed the items were taken from his car between 5 p.m. Friday and 11:30 a.m. Saturday. According to the police report, an officer reported to the scene at about 11:46 a.m. Saturday. Smith told the officer he left his vehicle in The Mark Athens apartment parking garage on Oconee Street at about 5 p.m. Friday, and “he was certain that he locked the doors because that is his usual habit.”

However, Smith said it was possible that when he accompanied a friend to a vehicle parked nearby at 2:30 a.m. Saturday, he might have accidentally unlocked his car, according to the report.

There were no signs of forced entry, Athens-Clarke public information officer Epifanio Rodriguez told the Tribune on Monday.

Does the NFL’s rookie seminar cover locking cars? Why would anyone leave something as important as a playbook in a car overnight? Asking for someone who looks like he needs a friend right now.

That’s just ludicrous. For one thing, the shade at the car is absurd; trying to judge players’ personal wealth is ridiculous, and a sure way to look stupid, as Rosenbloom did once the perfectly aboveboard endorsement deal came out. For another thing, Rosenbloom’s assumption that Smith’s comment that he might have accidentally unlocked the car shows negligence is crazy; do we all get to examine Rosenbloom’s own life now, and every instance where he loses his keys or bumps an unlock button on his own car? The “no signs of forced entry” doesn’t necessarily mean anything either, as that’s not conclusive at all that Smith left his car unlocked.

Oh, and if we’re going to assume lost playbooks are negligent, I presume Rosenbloom was just as vindictive against Kyle Shanahan for leaving a playbook in a bag that a reporter mistakenly took? And if accidentally-unlocked cars are negligent, is he going to rant against Blake Bortles, who left his truck unlocked with keys and wallet inside at a party this week? No? Just Smith? Alright then. Rosenbloom did apologize for his assumption about the car, but not for anything else in this crappy hot take.

2. Skip Bayless questions LeBron’s game-winner by wondering if he called bank: FS1 bag of hot air Bayless is so determined to find any way to criticize LeBron James that it’s beyond parody. The latest example came after James’ astounding buzzer-beating shot to down the Raptors in Game 3 Saturday. The rest of the world was in awe, and Bayless? He was wondering if James planned to actually bank it in, or if that was an accident:

THAT was clutch … if he actually aimed for the glass.

As Alex Wong noted, Bayless even beat the jokes about his take:

me: drafting a 'SKIP BAYLESS: BUT DID HE CALL GLASS???' TWEET

Finding a way to criticize James even after one of the most amazing shots imaginable is so perfectly Bayless. That’s what Fox has determined is the identity of their network, and worth over $5.5 million annually. Good job, good effort, guys.

Since the day city voted to take remove Yawkey Way from in front of Fenway, Sox are 3-4 and first place lead has gone from four games to one game. Just sayin'.

As per Price, both he and manager Alex Cora said his injury wasn’t about video games, but he’s going to stop playing Fortnite anyway thanks to the ridiculous waves the media (Shaughnessy in particular) made about it. Here’s Shaughnessy’s column on that front, titled “Game on: Is David Price’s ailment linked to video gaming?”, which, shockingly, presents no actual evidence to back up its conclusion:

Could things get any more hideous for Boston’s $217 million starter? Price is forever walking around Fenway with a target on his back because of his salary, his playoff history, his Dennis Eckersley ambush, and all the other quotes and stunts that indicate he is ill-equipped for Boston baseball. And now he misses a start in New York because of a condition that possibly was brought on by playing too many video games?

When I asked Cora if Price’s malady might be attributed to playing video games, the manager said “no,” adding, “From what I know, David Price has played video games his whole life. There’s a lot of teams playing ‘Fortnite’ [more on that later].’’

Just about every person Price’s age plays video games, but none of them make $217 million playing baseball and none of them miss a start in New York this week due to carpal tunnel syndrome.

We certainly don’t know the source of Price’s injury, but every definition of CTS cites video games as a possible cause of the syndrome. CTS occurs when one of the major nerves to the hand is squeezed or compressed as it travels through the wrist. It happens to some people who type a lot. It happens to gamers and eSport competitors.

…And David Price missed the big Yankee series, possibly because of too much “Fortnite.’’

Nope, nope and nope. But it’s good that Shaughnessy’s found his latest unrelated scapegoat to blame for Red Sox issues. Remember fried chicken and beer? The real “yuck” is that Shaughnessy gets paid for this garbage.