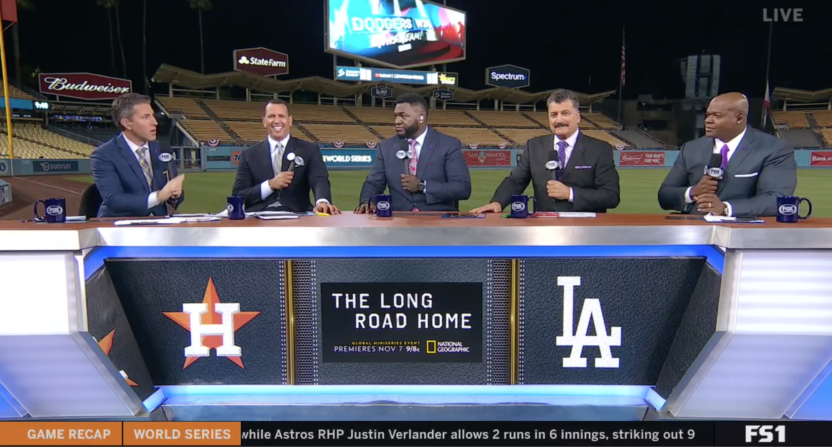 A long and memorable Major League Baseball Postseason is over, with the Houston Astros hoisting the World Series trophy after a thrilling seven-game battle against the Dodgers. The end of the playoffs marks the end of a month of baseball coverage from Fox, FS1, TBS, and even MLB Network and ESPN mixed in. We watched all (ok, fine… almost all) of that coverage to bring you the good, the bad and the ugly of the 2017 MLB playoffs on television.

It is easy to complain about the people who call baseball games. They talk off the cuff for four straight hours, reacting to the events in front of them and attempting to appease fans both casual and intense, old-school and new-school. It’s a tough gig. If you want to criticize Brian Anderson and Ron Darling (who worked the NLDS and NLCS for TBS) or Joe Buck and John Smoltz (who handled the ALCS and World Series for Fox), you certainly can.

Dodgers fans will tell you that Darling was biased against their team, analytically inclined fans will tell you Smoltz doesn’t understand advanced stats, and people of all stripes will tell you that Buck is too smug. And maybe all of those people will have a point. But the fact is that both TBS and Fox have settled on highly competent, generally listenable broadcast teams. These guys don’t commit embarrassing gaffes, they don’t lose their trains of thought, they don’t come off as under-informed. We have been subjected to some bad commentators over the years (and even in the Division Series). We should be thankful for the LCS and World Series booths.

In the past, viewers have taken issue with overly crowded Fox scorebugs. This year we got a simple, clean, intuitive design. It received more or less positive reviews.

Verducci and Rosenthal are arguably the two best baseball reporters of their generation, and Fox’s decision to use them as field reporters has transformed that role from extraneous to essential. They asked sharp questions of managers and players, relayed useful information during broadcasts and provided educated analysis the average reporter can’t dream of. Verducci’s stand-up about how Justin Verlander has used data from the Astros’ analytics department to improve himself as a pitcher in Houston, for example, was unlike anything we’re used to seeing from baseball field reporters.

In singling out Rosenthal and Verducci, who worked the ALCS and World Series for Fox, we mean no disrespect to Sam Ryan (TBS), Lauren Shehadi (TBS), and Jon Morosi (Fox, MLB Network), all of whom are capable reporters. But Rosenthal and Verducci (who also worked the ALDS for MLB Network) are the absolute best in the business, and their connections and insight added another dimension to Fox’s World Series coverage.

Admittedly, this is harsh. Neither the TBS nor Fox studio shows truly belong under the “bad” heading. They belong under a non-existent “just OK” heading.

Last year’s Fox studio show, fronted by Alex Rodriguez and Pete Rose, was a revelation. It combined the insight of, say, NFL Matchup, with the entertainment value of Inside the NBA. With Rose gone (for good reason), Fox tried to replicate the dynamic with David Ortiz as A-Rod’s buddy and antagonizer, but the results just weren’t quite the same.

On TBS, Casey Stern hosted a slightly more staid crew that got the job done but didn’t produce too many memorable moments. Neither the Fox nor TBS studio shows were awful, but nor was either particularly exceptional.

"The error was not speed, the error was lack of anticipation."- @AROD on Greg Bird being out at the plate. https://t.co/tDD11iOoZw

Unlike Fox’s scorebug, TBS’ graphic was not well received. It wasn’t exactly that the design was poor — it was that the bug was simply way too small. 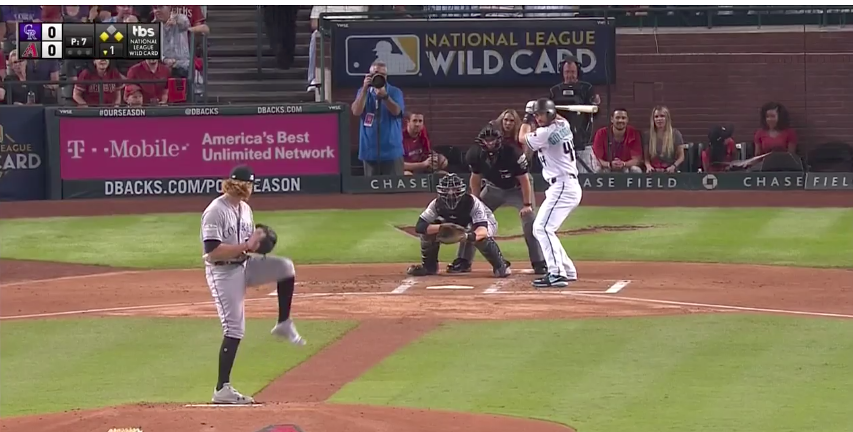 TBS is close to getting this right. They just click to click the corner and drag out a little bit.

In the opening days of the postseason, it took some sort of advanced degree in baseball television rights to figure out what channel the games were on. You had two series on FS1 and two series on TBS (neither or which are typically go-to baseball destinations), with matchups on MLB Network thrown in seemingly at random. Oh, and one of the wild-card games was on ESPN, for good measure.

Eventually, the arrangement crystallized — the AL was on FS1, the NL was on TBS, and MLB Network had rights, as usual, to a couple of afternoon games — but it was quite confusing for a minute there. And it will be quite confusing when we do it all again next year.

Obviously, advertising is part of baseball on TV. In fact, from a network’s perspective it’s the entire purpose of baseball on TV. But even so, there comes a point when advertising crosses a line and becomes intrusive to the fan, who is tuning in for the game, not the marketing. The World Series may or may not have crossed that line with the behind-the-plate YouTube ad that resembled a play button. It may or may not have crossed that line with its brief spots in the middle of innings. But it definitely, unquestionably crossed that line when Astros outfielder George Springer was virtually decapitated by a Masterpass ad projected on the outfield wall.

Though this column is specifically about television, we can’t ignore digital streaming, which has become a more and more popular way for viewers to consume these games. And frankly, Turner needs to spend some time honing its streaming platform. The TBS site was glitchy during postseason games, buffering often and sometimes freezing during commercials. For anyone without access to a television, watching the NL half of the playoff bracket was a pain. With linear TV still the dominant medium, maybe Turner can get away with a poor streaming service, but as watching events online continues to grow in popularity, they need to work out some of these kinks.