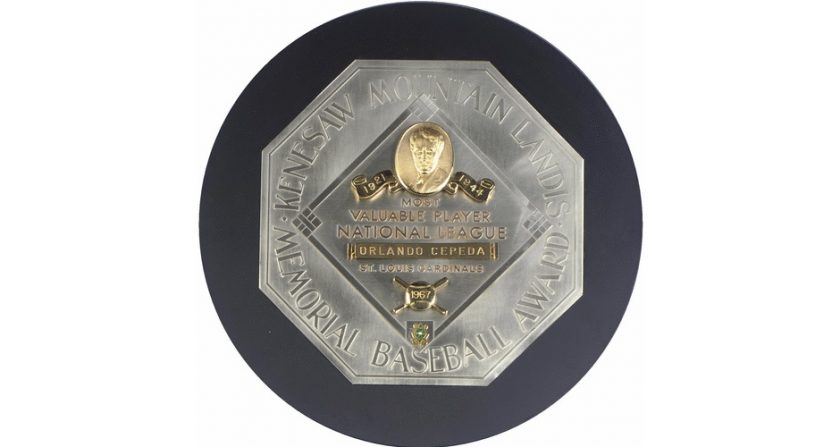 The biggest problem with that is Landis had a significant part in upholding the informal ban of Black players across Major League Baseball (folks, it’s not a coincidence that Jackie Robinson broke the color line two years after Landis died). This isn’t a new revelation – in his memoir, released nearly 60 years ago, Bill Veeck talked about Landis’ opposition to him purchasing and integrating the Phillies in 1942.

But no longer will the name of Landis be on the award. The BBWAA “voted overwhelmingly” to remove Landis’ name from the award in 2020. It will not be renamed this year, but could be in the future.

The Baseball Writers Association of America has voted overwhelmingly to remove the name of Judge Kenesaw Mountain Landis from the MVP awards. This year's MVP plaques will be nameless. A decision will be made next year on if the award should carry a name going forward.

A reported 89% of the 313 votes cast were in favor of approving the removal.

The issue of Landis’ name on the MVP award began to receive widespread attention over the summer following an Associated Press article by Ben Walker, which quoted several MLB veterans opposed to his name still being on the award, including former winners Barry Larkin and Mike Schmidt.

I never even thought about the naming of the MVP award until recently, and it did seem quite weird that the BBWAA was giving away an award named after Landis and an award named after Jackie Robinson (the Rookie of the Year). Several other awards are named after players, including the Cy Young award (named after, you guessed it, Cy Young), the Hank Aaron award (each league’s top hitter, partially voted on by fans), the Willie Mays award (World Series MVP), the Ted Williams award (All-Star Game MVP), the Roberto Clemente award (sportsmanship and community work), and the Edgar Martinez award (best DH). You’ve got all of those Hall of Fame players, and…MLB’s first commissioner who didn’t live to see the color line broken. Sure, makes sense.

It’s also not as if there aren’t plenty of possible players to name the MVP award after, either. Jimmie Foxx was the first player to win three MVP awards. Stan Musial, Roy Campanella, Joe DiMaggio, Yogi Berra, and Mickey Mantle also won three, and have all passed away. My take? Call it the Jimmie Foxx AL MVP award, and the Stan Musial NL MVP award. That way, you’re honoring the first three-time winner in each league.

But if the BBWAA wanted to have the award named after the same person for both leagues, why not choose Frank Robinson? Robinson “only” won two MVP awards, but is the only player to win in both leagues. Robinson was also the first Black manager in MLB history, and a long-time league executive. It would be a fitting honor for one of baseball’s greatest players.