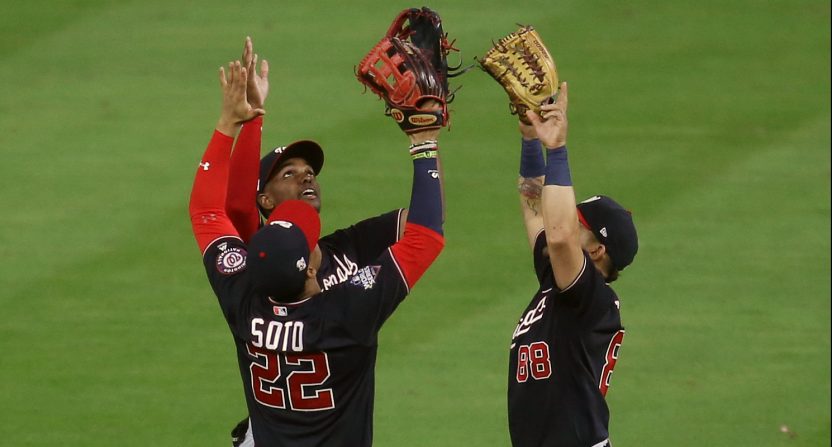 Aside from one NLDS matchup that has added yet another scar to my fandom, this has been an incredible MLB Postseason. The Washington Nationals have knocked off two division champions, one of which has won the last two NL pennants and finished the year with the league’s best record, en route to the franchise’s first World Series berth. The Houston Astros won their second AL pennant in three years after being taken to the brink of elimination by the Tampa Bay Rays in the ALDS and beating the New York Yankees in the ALCS thanks to a Game 6 walkoff homer. The first two games of the World Series, watched by few, have seen the heavily favored Astros lose, thanks in part to an awful start from Gerrit Cole in Game 1 and a bullpen meltdown in Game 2.

But most of the chatter during this Postseason hasn’t been about Juan Soto becoming one of the game’s brightest stars. It hasn’t been about Jose Altuve’s journey from an undersized, middle of the road prospect to one of the faces of baseball. Hell, it hasn’t even been about Cole and Stephen Strasburg being awesome, or Clayton Kershaw and the Dodgers choking again, or the Atlanta Braves’ continued failures to win a playoff series.

No, most of the baseball talk this October has been about shit happening off the field, and that should infuriate baseball’s shoddy leadership.

During the World Series this week, the main story has been Brandon Taubman, the former assistant GM of the Astros. Unless you’ve lived under a rock this week, you’re probably familiar with the Taubman story. Following that Game 6 victory over the Yankees, Taubman repeatedly expressed his joy about the Astros acquiring closer Roberto Osuna (the pitcher who allowed the game-tying homer in the ninth inning of Game 6), who was given a lengthy domestic violence suspension back in 2018. The team’s original statement about the situation involving Taubman was a joke, an NPR story made his comments even worse, and Taubman was finally fired by the team, days after Houston bungled their response to the story relaying his comments. Astros GM Jeff Luhnow’s press conference following his firing was (somehow) just as embarrassing as the Astros’ response on Monday night, and a story that could have been nipped in the bud before the World Series started has been the dominant story across baseball for the last week.

But as bad as the Taubman story has been, it hasn’t been the only story dominating MLB’s October storylines. A number of analysts stupidly criticized Nationals pitcher Daniel Hudson for taking paternity leave at the start of the NLDS. Umpire Joe West decided to sue former catcher Paul Lo Duca after Lo Duca claimed West took bribes from Billy Wagner. Umpire Rob Drake became the subject of an MLB investigation after breaking the first rule of Twitter (“never tweet”), and somehow provided a better response than the Astros did to the Taubman fiasco.

Also this month, MLB’s proposal to eliminate 40 Minor League Baseball teams has come to light, and it has received a largely negative reaction from fans of the game. The proposal would eliminate thousands of player jobs from Minor League Baseball, and even with a pay increase coming to the remaining players, this would still end up saving owners money while also giving fewer opportunities to less touted players and taking live baseball away from markets that aren’t close to a major league city (rumored “dream league” be damned).

In addition, baseball has dealt with allegations that the previously juiced baseball (despite MLB’s head in the sand response) has been deadened for the playoffs (again, despite MLB’s head in the sand response), which has turned the sport this month into something we didn’t see during the six months of the regular season. The deadening of the balls also led to another controversy on the field, one that wouldn’t have happened had the Postseason balls been the same as the regular season balls (one more time, despite MLB’s insistence that everything is fine and the same).

In Game 1 of the Cardinals-Braves NLDS, Ronald Acuña Jr didn’t run out a fly ball in the seventh inning, ending up on first base instead of second. Acuña’s mishap was the chief talking point after Game 1, ignoring the fact that the Braves allowed six total runs in the eighth and ninth inning to lose the game. Acuña was thrown under the bus after the game by his teammates and Braves manager Brian Snitker, and was also negatively talked about throughout the rest of the series online, during studio programming, and during the games themselves, despite hitting .444/.565/.889 in the five game series defeat to the Cardinals (Freddie Freeman, the “team leader” and best hitter on the team, had an OPS 800 points lower). It was particularly galling to see this attitude from MLB and its TV partners when the Postseason has been plastered with “WE PLAY LOUD” ads, featuring Acuña (among others). There were plenty of other storylines to focus on over the course of this series, but instead, an incident in Game 1 was the series-defining moment for an NLDS matchup that went five games.

This isn’t all MLB’s fault, of course. The league can’t control when news about lawsuits breaks, or when an executive decides to rant in a clubhouse, or when a reporter working on a story goes live with it. But the league’s response to many of these stories shows just how off the pace they are. The Taubman story could have been killed that night, but it was allowed to drag on after the Astros’ awful initial statement and MLB’s milquetoast response focusing on interviewing the principal figures involved before making a more thorough response. The bullshit MLB has continued to peddle regarding the baseballs and whether they are or are not juiced has only let the discussion continue.

This is something that the NFL is great at – managing to kill a major story by either stonewalling or getting fans to move onto another story thanks to the league’s frantic news cycle. As we’ve seen in MLB’s slow drip offseason, the league allows negative stories to fester and grow thanks to a combination of poor responses and a lack of major positive stories that can attract the attention of fans and the media. And incredibly, this pattern is continuing for MLB, given the news about the potential attendees and first pitch before Sunday’s Game 5 (if necessary). I can’t wait to focus on *that* instead of the performances of the Nationals and Astros in Games 3 and 4.