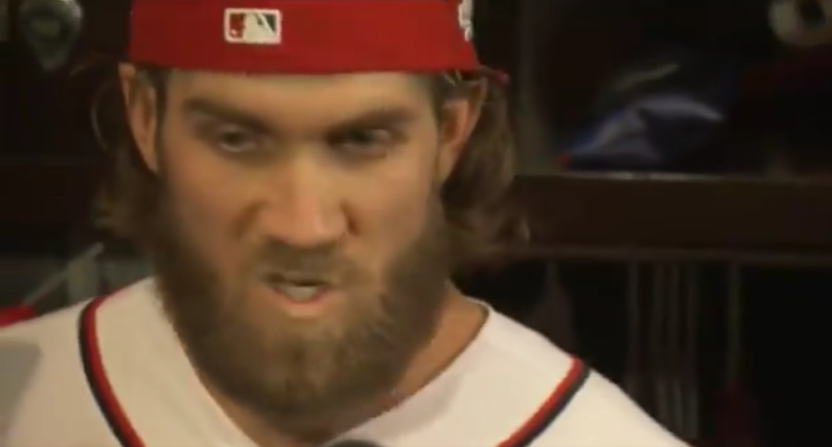 Back in 2012, Nationals’ star Bryce Harper’s “clown question, bro” response to a Canadian reporter who asked him about celebratory beer (Harper has stated that he doesn’t drink thanks to his Mormon faith, and he was 19 at the time, legal drinking age in Ontario but not in the U.S.) took off to the degree where Harper trademarked it.

Now, five years later, TBS studio host Casey Stern used “clown question” himself to describe a question another (unidentified) reporter asked Harper after the Nationals’ season-ending 9-8 loss to the Cubs Thursday, as you can see in this clip from Funhouse:

The reporter asks (0:05) “Any thoughts on how the Cubs-Dodgers series is going to go?” and Harper looks at him askance, then responds “Uh, not really looking towards it at all.” That fades back to Turner’s set, where Stern says “Let me tell you something. You guys, players, talking about players, I don’t know who that member of the media was, but you do not ask a player, who after 18 days off all season just lost his season, what he thinks about the next series. To quote Bryce Harper, that is a clown question. That is a disgrace.”

It’s hard not to agree with Stern there. It seems pretty disrespectful to ask Harper about the Cubs-Dodgers series immediately in the wake of this loss, especially given that it was a close and emotional loss. And even if the reporter’s desperate to try and set up the NLCS in his copy (not a great motivation to try and get player quotes immediately after this game, but maybe there’s a reason for it), there are better ways to do that. It’s possible to ask Harper about what he thought the Cubs did well in this series (although that’s still somewhat risky territory), or about specific players he faced, without reinforcing that his season is over and the Cubs are moving on to face the Dodgers. Doing it in this way made the reporter look bad. Even Dodgers’ pitcher Brandon McCarthy weighed in on that:

postseason baseball demands the most out of everyone. The writer who asked Bryce Harper for his thoughts on Dodgers/Cubs shows anyone can choke.