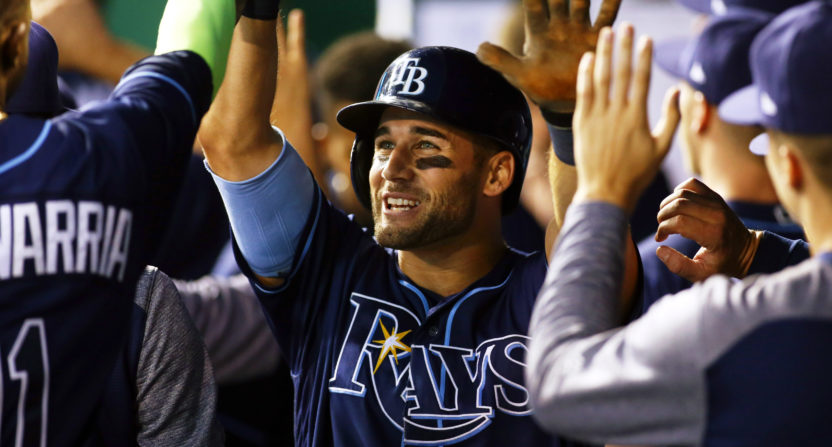 This offseason as much as ever, the Tampa Bay Rays have reminded the baseball world of their trademark frugality. After winning 80 games last season and contending for the playoffs into September, the Rays traded franchise legend Evan Longoria, then unloaded starting pitcher Jake Odorizzi, outfielder Steven Souza Jr. and designated hitter Corey Dickerson. Per Sportrac, they now have $71 million in 2018 salary commitments, down from $91 million last year.

With that in mind, the team’s baseball operations department was surely happy to hear that, as reported Monday by Sports Business Journal, the franchise is nearing a deal with Fox Sports Net that would drastically increase its television revenue.

Per SBJ, the 15-year agreement would pay the Rays about $50 million in 2019 and an average of about $82 million a season through 2033. That would represent a sizable boost for the team, which will collect about $35 million in 2018 in the final year of its current deal, which has reportedly paid out an average of only $20 million per.

Despite their low attendance and reputation as one of baseball’s forgotten teams, the Rays tend to draw solid TV ratings. Per Forbes, the team ranked a respectable 18th in baseball in primetime ratings, after ranking 13th the season before. Both years, Rays games were the most-watched primetime programming on cable in the Tampa-St. Petersburg market.

Because each baseball team negotiates its local rights deals separately, TV revenue varies wildly from franchise to franchise. While a handful of teams pull in nine-figure sums each year, others are left with less than a quarter of that. That’s a big part of the reason the highest spending team in baseball last year (the Dodgers) devoted more than three times as much to payroll as the lowest spending team (the Brewers) and why teams like the Rays sometimes give up rather than compete with more wealthy rivals.

According to SBJ, the Rays’ deal with Fox Sports Net has been complicated somewhat by Disney’s acquisition of 21st Century Fox, which has been agreed upon but not yet finalized as it awaits approval from regulators. But assuming the sides reach an agreement, the Rays should have a bit more money to throw around in future years, meaning maybe down the road they won’t have to trade away half their team to save cash.