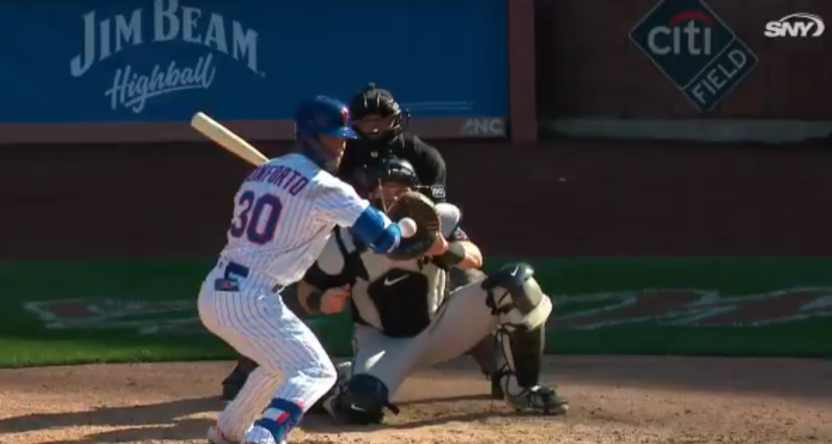 One of the more judgement-laden rules in baseball comes around the hit-by-pitch rule, and that became a notable subject during the Marlins-Mets game Thursday. Generally, a batter being hit by a pitch leads to them being awarded first base, but there are exceptions for a pitch in the strike zone (to be ruled a strike, which overrides the HBP) or a pitch outside of the strike zone that the batter did not make an effort to avoid (to be ruled a ball). Here’s the full wording on that from the 2019 MLB rulebook (5.05b):

…(2) He is touched by a pitched ball which he is not attempting to hit unless (A) The ball is in the strike zone when it
touches the batter, or (B) The batter makes no attempt to avoid being touched by the ball;

Thursday’s Marlins-Mets game ended on a hit by pitch, with Mets’ outfielder Michael Conforto struck by a 1-2 pitch from Anthony Bass with the bases loaded and one out in the bottom of the ninth. The hit-by-pitch ruling gave the Mets a 3-2 win. But Conforto seemed to lean into that pitch and contact it in the strike zone. If home plate umpire Ron Kulpa had ruled it to be in the strike zone, that would have been strike three, and if he had ruled that it was outside of the strike zone but Conforto didn’t make an attempt to avoid it, it would have been ball two. But he ruled it a hit-by-pitch, and the Mets’ broadcast (of Gary Cohen, Ron Darling and Keith Hernandez) on SNY was not pleased with the outcome:

MICHAEL CONFORTO GETS HIT BY A PITCH AND THE METS WIN IT 3-2!!!!! pic.twitter.com/R1QdgiRQJ5

There’s a lot of criticism there from the broadcast, from “You can’t do that!” to “You’re trying to get it right, they don’t get it right, so why even have replay?” (And the latter is a notable point; under the current rules, the on-field umpires have to make the determination on a batter’s attempt to avoid, with replay unable to weigh in on that. Replay can only confirm if a player was hit, and Conforto was.) And it’s definitely interesting to see a team’s local regional sports network be so critical of a call that worked out in that team’s favor. Meanwhile, Kulpa himself later admitted he messed up:

I just spoke to umpire Ron Kulpa as a pool reporter. He admitted he didn't call it correctly: “The guy was hit by the pitch in the strike zone. I should have called him out.”

In an ideal world, this would be close to the norm. Yes, local RSNs are targeted at fans of that team, but that doesn’t mean that the broadcasting crew should be over-the-top homers for that team (and some of the worst homers out there regularly produce the worst results in our regular fan-voted polls). And it’s appreciated to see RSN broadcasters criticizing an outcome even when it ends up in their team’s favor; this play and this call wasn’t a good look for MLB, and that’s more important to recognize than team-specific interests.

But it’s worth noting that the SNY cast here are not the only RSN broadcasters to do this. Yes, there are some incredible homers out there, but there are also a lot of people who do a good job of calling games even when they don’t end in favor of the teams that employ them. And many RSN broadcasts admit that controversial calls are controversial. The degree of criticism here is notable, but it also shouldn’t be taken as “SNY’s broadcasters are the only honest ones.”

At any rate, the way this game ended was a bad look for MLB. It was a bad look for Kulpa, who had a great view  on Conforto leaning into that pitch and decided to award him first base anyway. It was a bad look for the MLB protocols on what’s reviewable; emphasizing umpires’ discretion on “attempt to avoid” just makes it worse when those umpires obviously get it wrong. But it was a good look for the SNY broadcast, which handled a game’s controversial ending in appropriate fashion even when that benefited their team. Hopefully that will become more of the standard, rather than something that’s so unique that it’s worth writing about.