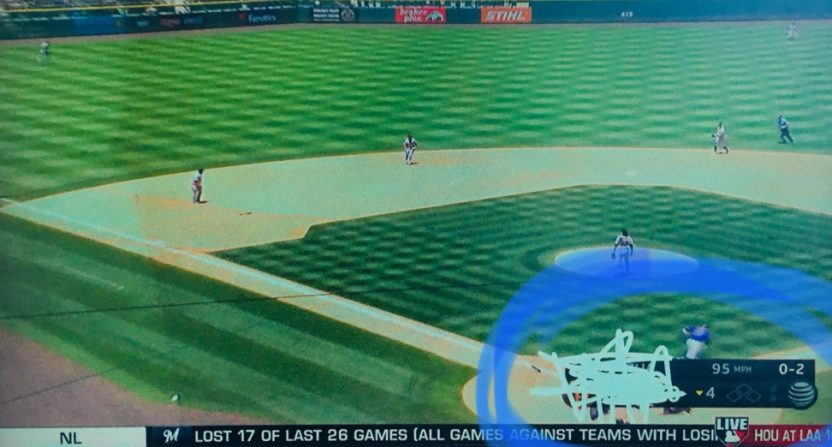 The 46-46 Colorado Rockies got absolutely killed at home in the first game of a doubleheader against the 43-49 San Francisco Giants Monday, and that led to the Rockies’ broadcasters on AT&T Sportsnet Rocky Mountain taking the unusual measure of scribbling out the score. That happened when the Rockies were behind 13-0 by the bottom of the fourth inning, with announcers Drew Goodman and Ryan Spilborghs discussing hiding the scorebug and then actually scribbling over it and keeping it that way. Here’s video from AA’s Ben Koo:

Goodman says “Move that scoreboard off. We’ve elected to not show people the score for a while. Trevor Story in the fourth inning against Jeff Samardzija,” and Spilborghs replies “I like it.” The scoreboard then goes back on the screen and Goodman says “They’re not listening to us. Again.” Spilborghs then says “Hide the bug for an inning,” and when the producers don’t do it fast, he says “I’ll scratch this thing out. There we go.” Goodman then says “Well done, Spilly” and Spilborghs responds “You know what’s funny? The producer’s going to be in my ear asking me to clear it,” Goodman says “Don’t,” and Spilborghs continues “I’m not. I have the power. I HAVE CONTROL!” Goodman says “You do, and do what I’m really good at; not listening.” Spilborghs then says “Cross it off even more, there we go” as Goodman draws more doodles on the screen, and Goodman says “I wanted to participate, I got some frustration out there.”

This, of course, led to a lot of tweets:

@DrewGoodman42 and @spillygoat19 have to be the best booth combo ever for the @Rockies ??? ps I didn’t wanna see the score either so thanks guys ???? pic.twitter.com/m26fCQbJpQ

An all-time moment on the @Rockies broadcast@spillygoat19 scratching out the score ? pic.twitter.com/hpICbgEKXu

When #SF #Giants Plays #Rockies –> Nobody expected the announcers to scratch the score– 13-0 bottom of 4th#Shame pic.twitter.com/ThgZrhjyk6

Rockies broadcast has had enough. pic.twitter.com/5c0C8rUESA

The Rockies broadcasters just said they have elected not to show the score to people for a little while and just did this I’m dead lmao ??? pic.twitter.com/Ts4RrqiOHI

This wasn’t just for one batter, either. The broadcast stuck with it into the next inning:

The Rockies broadcast has had the score blurred out pic.twitter.com/jyBlFZNd6r

The Rockies’ broadcast crossed out the score since they’re getting blown out lmfaoooooooo pic.twitter.com/Do3HwzlJdk

This got a lot of praise from Rockies’ fans, but it also apparently sparked some confusion from those who can’t, you know, Google the score:

I just came home from work and I turned on the television set to watch the Rockies, why can't I see the score?

This is certainly an unusual move, but it’s a pretty funny one, and one of the better announcing reactions we’ve seen to a blowout. (For the record, the Giants eventually won 19-2.)