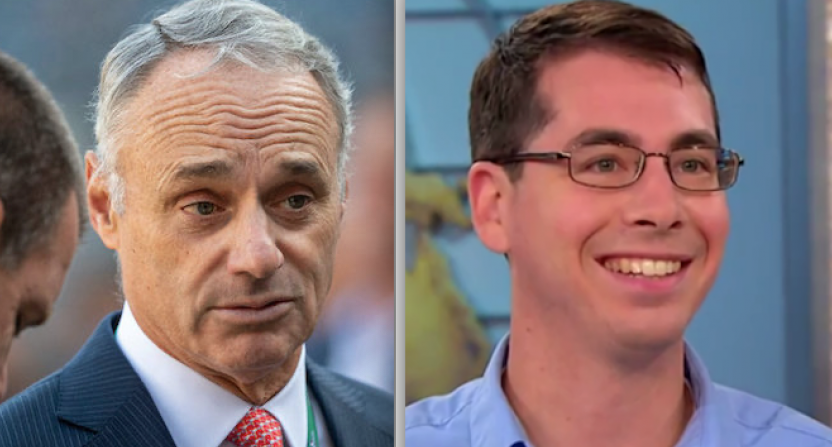 MLB commissioner Rob Manfred met with the press on Sunday, presumably hoping to turn down the heat on how he handled the investigation into the Houston Astros’ sign-stealing scheme. Instead, Manfred invited further criticism and scrutiny from media and fans into his decision-making. He also showed some irritation toward reporters who uncovered aspects of his investigation and exposed them to the public.

Earlier this month, the Wall Street Journal‘s Jared Diamond obtained a copy of a letter Manfred sent to Astros general manager Jeff Luhnow which detailed MLB’s discovery of a sign-stealing algorithm created by the team’s front office called “Codebreaker.” The system was also referred to as “Dark Arts” in communications between front office staffers and Luhnow, showing that the general manager was indeed aware of the sign-stealing scheme if not the exact details of how it worked.

Furthermore, the letter revealed that the sign-stealing scheme wasn’t as player-driven (though led by then-bench coach Alex Cora and veteran outfielder Carlos Beltran) as MLB’s initial punishment had indicated. That was yet another blow to Manfred, who’s endured heavy criticism for what many perceive as light penalties against the Astros, especially the players involved in the scandal.

While meeting with reporters in Florida Sunday afternoon, Manfred showed that the criticism had gotten to him, directing some snark at Diamond for his reporting of the letter to Luhnow.

Rob Manfred to the reporter who broke the news on the Astros' Codebreaker scheme: "You know, congratulations. You got a private letter that, you know, I sent to a club official. Nice reporting on your part."

“Nice reporting on your part” was almost certainly intended as sarcasm, yet it affirms that Diamond did his job as a reporter who covers Major League Baseball — and did so extremely well.

Throughout the offseason (and a good chunk of the postseason), there has been no bigger story in baseball than the Astros’ sign-stealing scheme utilized during their 2017 World Series championship season. Manfred would surely have preferred that media coverage focused on the Washington Nationals winning their first World Series, free agents like Gerrit Cole and Anthony Rendon signing huge contracts, and the recent trade that sent 2018 AL MVP Mookie Betts from the Boston Red Sox to the Los Angeles Dodgers.

Yet as spring training begins, the Astros and MLB’s investigation continue to dominate the headlines. Manfred is clearly annoyed by that and his efforts to discuss it with the press (which included an interview with ESPN’s Karl Ravech) demonstrate his ambition to settle the issue. But he can’t speak for the fans, media, and players who believe this story isn’t finished because MLB’s penalties for the Astros weren’t harsh enough.

When players such as Trevor Bauer and Cody Bellinger criticize the Astros and MLB’s lack of punishment, the controversy lives on. This will almost certainly continue to be a storyline during the 2020 MLB season as teams enforce their own penalties toward Astros players involved in the sign-stealing scheme and call their achievements into question. Manfred also said that fans and media not letting this go and continuing to hold the Astros accountable for their cheating will be another form of punishment.

So apparently, Manfred is hoping others do his job for him. And then he criticizes a reporter for doing just that, for revealing to the public that MLB wasn’t completely forthright with media and fans about what its probe discovered. Sarcasm and snark is almost never a good look in a press conference from someone in authority. Yet it’s a revelation that cracks are developing in the facade, that intense scrutiny is touching a nerve.

If Manfred was hoping to cool down questions about his handling of this scandal, he instead emboldened the press to continue investigating, to keep holding him and his office accountable for a punishment that never looked severe enough. This won’t just go away and Manfred is to blame for that.