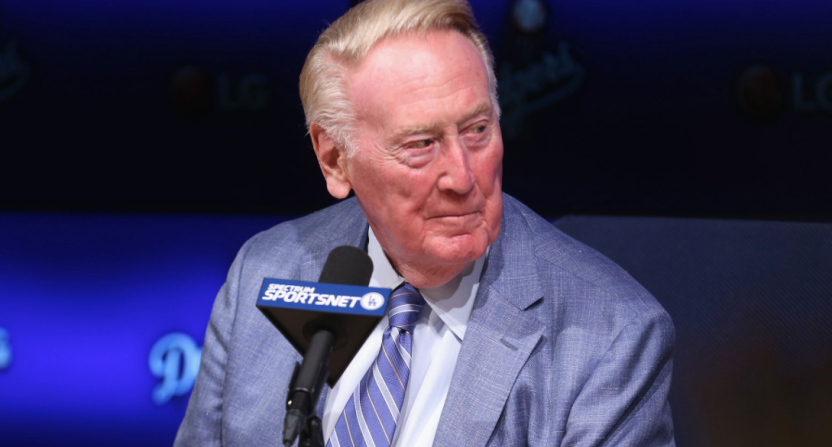 The passing of Vin Scully at 94 Tuesday led to plenty of looks back at the legendary broadcaster’s career, and at his remarkable ability to weave great stories into game broadcasts. But Scully should also be remembered for the way he regularly met remarkable historical moments with calls that became an indelible part of those moments. One of the most notable there is his call of Kirk Gibson’s pinch-hit home run in Game 1 of the 1988 World Series for NBC:

The “And look who’s coming up!” to start this, followed by a drop out so viewers could hear the crowd going wild, is a great example of Scully (seen above in 2017) setting the scene. He then carries on with “All year long, they looked to him to light the fire, and all year long, he answered the demand, until he was physically unable to start tonight, with two bad legs, a bad left hamstring and a swollen right knee. And with two out, you talk about a roll of the dice, this is it. If he hits the ball on the ground, I would imagine he would be running 50 percent to first base. So the Dodgers trying to catch lightning right now.”

There are some further good lines throughout the at-bat, including “With the left knee bothering him, he can’t push off. Now he can’t push off, and he can’t land.” Then the actual hit comes at 6:43, with Scully calling it “High fly ball into right field, she is, GONE!” He then drops out for a full 70 seconds to present the crowd roar, and comes back with the perfect line “In a year that has been so improbable, the impossible has happened.” Then, after dropping out again for more crowd noise, Scully returns as they show the replay with “And now the only question was, could he make it around the base paths unassisted?”

Another great Scully moment comes from his call of Sandy Koufax’s perfect game in 1965:

The part of that starting at 7:40 is particularly notable, coming after Scully let the crowd reaction tell the story of Koufax completing the game. He then picks the action back up with “On the scoreboard in right field, it is 9:46 p.m. in the city of the angels, Los Angeles, California. And a crowd of 29,139 just sitting in to see the only pitcher in baseball history to hurl four no-hit, no run games. He has done it four straight years. And now, he’s capped it; on his fourth no-hitter, he made it a perfect game. And Sandy Koufax, whose name will always remind you of strikeouts, did it with a flourish; he struck out the last six batters. When he wrote his name in capital letters in the record book, that K stands out even more than the OUFAX.”

“Got him! The greatest game ever pitched in pro history, by Don Larsen. A no-hitter, a perfect game, in a World Series!”

Scully not only called players’ best moments, though, he also called some of their worst. One case of that came from his NBC call of Bill Buckner’s error in Game Six of the 1986 World Series, which came at the end of a remarkable at-bat from Mookie Wilson. The defining play there starts at 4:17:

“Little roller up along first, behind the bag! It gets through Buckner! Here comes Knight, and the Mets win it!” Scully then lets the crowd noise tell the story for almost two minutes, then comes back with “If one picture is worth a thousand words, you have seen about a million words. But more than that, you have seen an absolutely bizarre finish to Game 6 of the 1986 World Series. The Mets are not only alive, they are well, and they will play the Red Sox in Game 7 tomorrow!”

There are many other great Scully calls in baseball throughout the years. But it’s also worth remembering the work he did as a football and golf broadcaster. And one particular football highlight came from the Joe Montana to Dwight Clark “The Catch” in the 1982 NFC Championship Game for CBS.

Another indelible call from Vin Scully, etched in history forever.

“Tom Landry is six yards away from his sixth Super Bowl. And of course, for the upstart 49ers, they’re six yards away from Pontiac (the Pontiac Silverdome in Michigan, where Super Bowl XVI was set to be played). Third and three. Montana, looking, looking, throwing in the end zone. Dwight caught it! Dwight Clark! It’s a madhouse at Candlestick! With 51 seconds left!”

Those are just a few of the many incredible calls Scully made throughout the years. He’ll be missed, but he’ll never be forgotten.