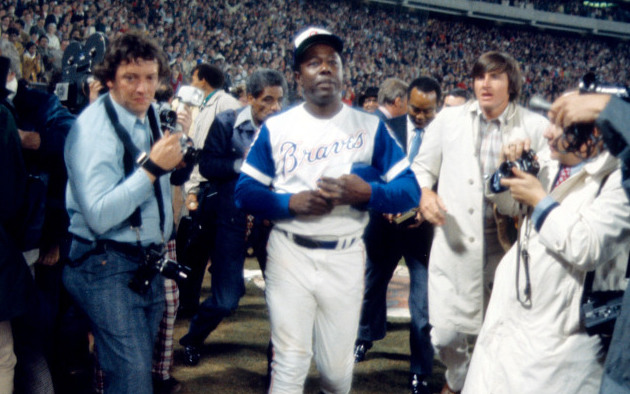 The anniversary of Aaron’s milestone is bittersweet since it’s the first time that he’s no longer with us to reminisce and celebrate. The Hall of Famer, who eventually hit 755 home runs, passed away in January at the age of 86.

But we can certainly note the occasion by remembering the broadcast calls of that historic moment. On local radio, Milo Hamilton had the call most of us likely recognize with No. 715.

Considering Vin Scully’s place in baseball broadcast history, plenty of others likely remember his call of Aaron’s homer for the Dodgers radio network.

“There’s a high drive into deep left-center field, Buckner goes back… it is gone!” Scully said. He then said nothing as Aaron rounded the bases and joined his teammates (along with a trenchcoated Craig Sager) at home plate, letting the sounds of the moment, the cheers from the Atlanta Stadium crowd, and the fireworks going off in the ballpark tell the story for listeners.

Eventually, however, Scully put Aaron’s home run in its proper cultural context, one of the many skills that made him such an iconic broadcaster.

“A black man is getting a standing ovation in the Deep South for breaking a record of an all-time baseball idol. And it is a great moment for all of us, and particularly for Henry Aaron, who was met at home plate, not only by every member of the Braves, but by his father and mother.”

“And for the first time in a long time,” said Scully, “that poker face of Aaron’s shows the tremendous strain and relief of what it must have been like to live with for the past several months. It is over.”

On television, Curt Gowdy was at the mic for NBC when Aaron took the top spot on baseball’s all-time home run list.

“There’s a long drive, ball hit deep… deep… and it’s gone!” said Gowdy. “He did it! He did it! Henry Aaron is the all-time home run leader now! Listen to this! He did it!” And like Scully, Gowdy let the sounds and visuals establish the rest of the scene.

Remembering Aaron’s legendary home run also feels more resonant in light of Major League Baseball deciding to pull the 2021 All-Star Game out of Atlanta in response to Georgia’s controversial new voting laws. Having the Midsummer Classic in Atlanta would’ve presented the opportunity to commemorate Aaron’s achievement, his career, and his advocacy for civil rights in this country.

Plenty of tributes were paid to Aaron after his death. (Though Barry Bonds surpassed him as baseball’s all-time home run leader with 762, many still view “Hammerin’ Hank” as the true record-holder due to Bonds’ association with performance-enhancing drugs.)

Yet it still feels as if he and his achievements are not honored enough. Perhaps because the man himself was quiet and preferred not to attract attention. But we can do the celebrating for him by never forgetting.

[This post was updated to include Gowdy’s television call from NBC.]