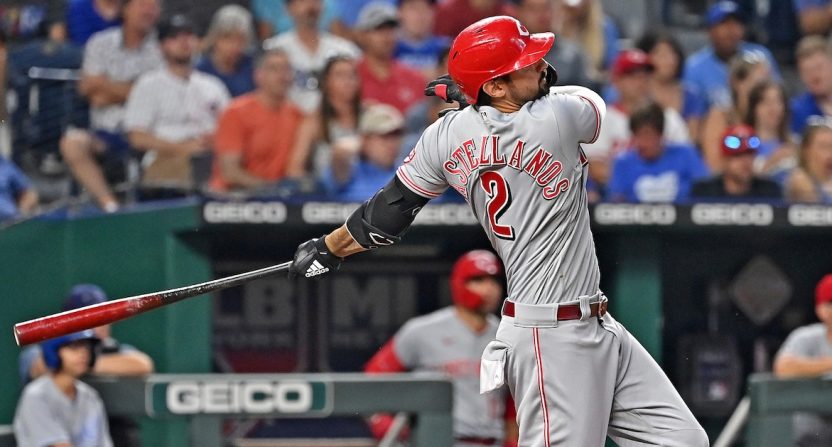 Say this for Cincinnati Reds slugger Nick Castellanos: He certainly has a talent for stepping into a broadcast with a well-timed home run.

During Monday’s game versus the Royals, Bally Sports Kansas City broadcaster Ryan Lefebvre was eulogizing George A. Gorman, the father of longtime Royals equipment manager Pat Gorman, who passed on Saturday at the age of 96. In the top of the seventh inning, while Lefebvre was telling Gorman’s story, Castellanos hit the first pitch from Mike Minor into the left-field seats for a home run.

“There’s a drive into deep left-center field and there’s never a great time to eulogize someone during the broadcast, so we apologize for the timing. But… our hearts go out to Pat, who’s just been a tremendous, loyal employee to the Royals for 26 years, and his wife Katie, she lost her father-in-law, his daughters Abby and Caroline, who lost their grandfather. But they had him for 96 years.”

It was an unfortunately awkward moment, trying to finish a poignant tribute to Gorman as Castellanos rounded the bases, crossed home plate, tied the ballgame, and high-fived with his Reds teammates.

As soon as the moment happened, Lefebvre’s call quickly circulated on social media, reminding fans of the last time the Cincinnati outfielder interrupted a serious, solemn moment with a home run. And that happened in Kansas City, as well, nearly a year ago.

Castellanos has become a legendary internet meme since last August when he hit a home run while broadcaster Thom Brennaman was attempting to apologize for being caught saying a homophobic slur on a hot mic. Brennaman interrupting his monologue to acknowledge that Castellanos had homered off Kansas City Royals pitcher Greg Holland — briefly stopping a morose juncture to call baseball action — resulted in one of the most surreal calls ever heard on a broadcast.

“As Holland takes over on the mound, I made a comment earlier tonight that I guess went out over the air that I am deeply ashamed of,” Brennaman said during the infamous call.

“If I have hurt anyone out there, I can’t tell you how much I say from the bottom of my heart that I am so very, very sorry. I pride myself and think of myself as a man of faith, as there’s a drive into deep left field by Castellanos, that will be a home run,  and so that will make it a 4-0 ballgame.”

Related: Twitter data shows how Thom Brennaman’s “There’s a drive into deep left field by Castellanos” only really took off a month later

In the days, weeks, and months since then, Brennaman has been mocked and Castellanos referenced whenever a public figure is attempting to apologize or somehow salvage a reputation in the face of scandal. If you’re a regular Twitter user, hardly a day goes by when someone doesn’t mention “There’s a drive into deep left field by Castellanos, that will be a home run…” And there it happens again, this time in real life.

As Lefebvre said, there’s really no good time for a eulogy on a broadcast unless it occurs when it’s unlikely not to be interrupted, Perhaps the Bally Sports Kansas City broadcast should’ve paid tribute to George Gorman going into a commercial break, rather than coming out of one and baseball action resuming. But that’s in hindsight and there was no way of knowing Castellanos would break up the moment with a home run.

Just to be safe next time, however, maybe producers and announcers should try to avoid serious moments when Nick Castellanos comes to bat in Kansas City.