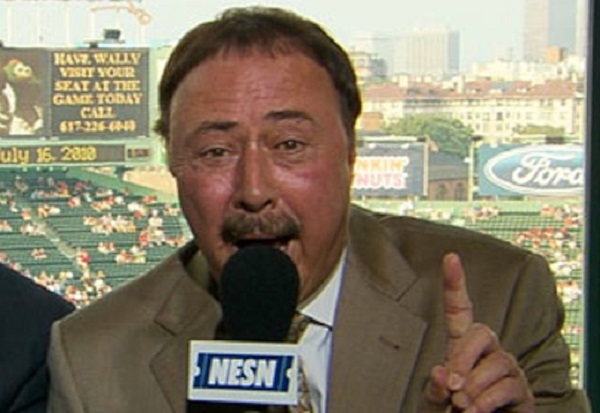 Famed Boston Red Sox player and broadcaster Jerry Remy passed away at 68 on October 31 last year. On Tuesday, the team announced their plans to honor Remy (seen above in 2015) this season, which include a season-long commemorative patch as well as a special pre-game ceremony on April 20:

This season we will honor and celebrate the life and career of Red Sox Hall of Famer Jerry Remy with a season-long commemorative patch and in pregame ceremonies preceding the April 20 game at Fenway. pic.twitter.com/IhsL24SF4A

The Red Sox will honor the late Jerry Remy by wearing commemorative patches bearing his name and number on their uniforms all season.

Remy, who received iconic status in Red Sox Nation during his 33 years in the broadcast booth, will be honored in pregame ceremonies prior to the April 20 home game against the Blue Jays.

This will be the first time since 2012, when they celebrated the 100th anniversary of Fenway Park, that the Sox will wear commemorative patches for an entire season.

“I think it means a lot to the organization, to the players, to everybody that is part of us,” said manager Alex Cora. “I think the most important thing is it means a lot to the city and to the Red Sox fans. Obviously we wish he was with us, instead of putting a patch on, but that’s one of the things that’s going to mean a lot. Obviously this organization feels the world about Remy and his family and what they mean to us. It’s just a great tribute not only to him but his family too.”

Browne goes on to note that the team has also had some partial-season patches, including ones honoring Ted Williams after his July 2002 passing. But a full-season patch is quite rare, and it’s cool to see the Red Sox doing that for Remy.

Remy supplied color commentary on NESN Red Sox broadcasts from 1988-2021, working with play-by-play voices Ned Martin, Bob Kurtz, and Dave O’Brien; he also worked with Sean McDonough and Orsillo on the team’s over-the-air broadcasts. And he had a lot of fans, and produced some very memorable broadcasting moments. He’ll be greatly missed, but it’s good to see the team honoring him all season.