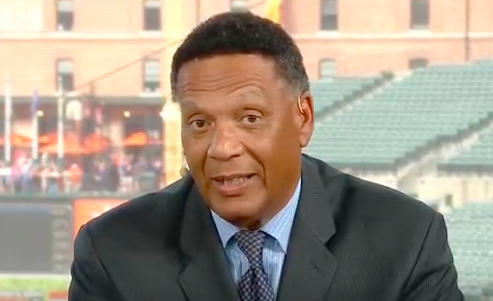 For more than 20 years, Singleton has served as a broadcaster for the New York Yankees. While he doesn’t get the viral attention that John Sterling or Suzy Waldman or even Michael Kay does, Singelton’s quality and longevity as a broadcaster are certainly to be admired. This week he announced that it would be his last year calling games as he plans to retire from the YES Network at season’s end.

LOOKOUT! ? This will be my final season of calling baseball games. I’ve been playing or talking baseball ever since I was 4 years old. It’s time for this enjoyable ride to end. Thanks fans for allowing me into your homes & businesses. It’s been my pleasure. #Thisoneisgone

Singleton opened up more about the decision to walk away from the broadcast booth in an interview with Newsday where he shared this amazing story about his mother’s reaction to his announcing career.

He recalled his late mother being skeptical, until after 10 years of him doing television she deadpanned, “You know, you could make a career out of this.”

“I hadn’t even joined the Yankees yet,” Singleton said. “Once I got to the Yankees I think she thought it was the real deal.”

While Singleton never played for the Yankees (he played for Montreal, Baltimore, and the Mets during his big league career) he’s been synonymous with the Yankees since joining their announce team in the 1990’s. Singleton said that after such a sustained run in the booth, he wanted to leave on his own terms now while he was still at the top of his game as a broadcaster.

“When I stopped playing baseball I knew it was time to stop,” he said. “I could feel that I wasn’t as good and I wasn’t going to stick around and not be as good and screw up everything I’d already done on the field. This is a little different because I know I can keep going if I want to.

“But I’m not the type of guy who’s going to stay in the booth forever. I’ve seen that from other broadcasters in the past, and sometimes they’re not as good as they were in their heyday. That’s not going to happen to me.”

Singleton’s career has been unique in that he served as both an analyst and a play-by-play man with the Yankees. It’s a testament to his abilities as a broadcaster that he was equally as good at both after making the transition to the booth after his playing days.

Even if you weren’t a Yankees fan, whenever you turned a YES broadcast on, there was probably a certain level of comfort whenever you heard Singleton’s voice. He will definitely be missed by Yankees fans and fans across baseball as an announcer who has always been a top class presence in the broadcast booth.