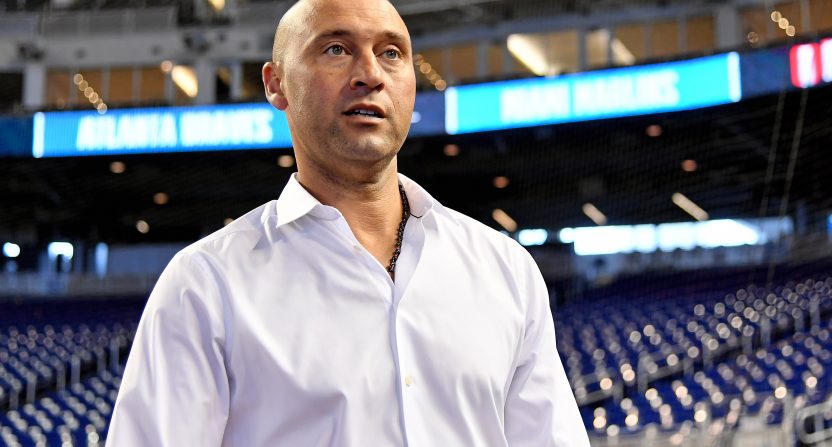 It’s Baseball Hall of Fame voting season, which means it’s also time for one of the most unfortunate side effects of Ryan Thibodaux’s excellent Hall of Fame vote tracker – the local columnist you don’t read who has an incredibly awful ballot.

Only five ballots have been recorded by Thibodaux as of 1:30 PM ET Friday, and two of those ballots are infuriating. Those two ballots feature one player, and one player alone – Marlins owner (and allegedly, former Yankees shortstop) Derek Jeter. Both of the Jeter-only ballots were cast by writers for Newsday, a New York based paper, and it’s hard not to imagine that the writers voted for Jeter (and Jeter alone!) because they’re angling for one of his famous gift baskets.

One of the Jeter-only ballots was filed by Steven Marcus, who is a “small Hall” kind of guy.

My Just Jeter Hall of Fame ballot for 2020. #keepthehallsmall pic.twitter.com/lFEOfqLhxO

Last year, Marcus turned in a ballot with just two names on it – Mariano Rivera and Edgar Martinez. Marcus didn’t vote for Martinez prior to last year, and his 2018 ballot had four names on it (Vladimir Guerrero, Trevor Hoffman, Chipper Jones, and Jim Thome, who were all inducted). In 2017, he voted for just Guerrero and Hoffman. In 2016, his two votes went to Hoffman and Ken Griffey Jr. In 2015, he voted for Craig Biggio (though he didn’t vote for him in 2014, Randy Johnson, and Pedro Martinez. If nothing else, he only checks a couple of boxes every year, and given that no one “lost” a vote from his ballot this year, I can at least respect that.

Then, there’s Newsday’s Anthony Rieber. Rieber also cast a Jeter-only ballot, and his reasoning was nothing short of terrible: he feels that “No.2 is the 1 this year”.

@NotMrTibbs my HOF ballot: Derek Jeter. Thanks for what you do.

One shitty part about this ballot is that it stalls the cases of Bonds, Clemens, and Schilling, who are each in their seventh year of the ballot and who all received between 62% and 65% of votes last year. Whether or not they deserve to be in is another discussion for another time, but for a writer to deny them votes for no real reason is absurd. Another shitty part is that Pettitte lost a key vote, and, given that he drew just 9% of vote last year, he’s now even closer to falling off the ballot this year. Rieber may not get a chance to vote for Pettitte next year, and his desire to slather praise and respect onto Jeter could have crushing consequences for one of Jeter’s long-time teammates.

To any writer out there that hasn’t turned in their ballot yet (and if history is any indication, there are a lot of you), don’t turn in a Jeter-only ballot. It doesn’t make you look respectful towards Jeter. It won’t earn you praise. All it does it make you look like an ignorant fanboy, and if you’re someone who drops returning candidates from your ballot to turn one in that has a checkmark next to just one name, you’re downright cruel.